The Reds finally dealt Brandon Phillips away and his new destination is in Atlanta. Also, will the Orioles actually bat Adam Jones leadoff? 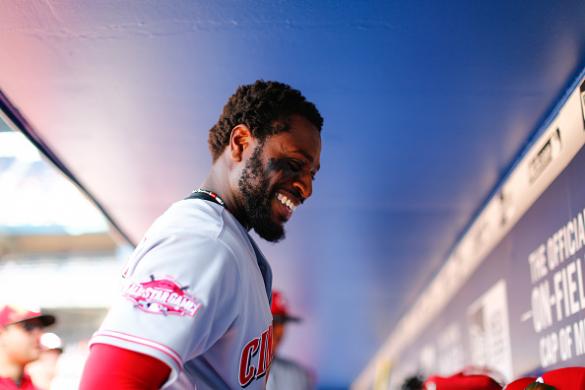 Finally, after years of trying, the Reds were able to deal second baseman Brandon Phillips. Finally. Here are the details.

Reds Receive: LHP Andrew McKirahan and RHP Carlos Portuondo, $13 million
Braves Receive: 2B Brandon Phillips
* The Reds will pay $13 of the $14 million that Phillips is owed this year.

The Braves get Phillips as they enter their new home of Sun Trust Park with a ton of old men now on the roster (they also added Bartolo Colon, R.A. Dickey, Jaime Garcia on the hill). That’s a team that ain’t afraid to keep their club afloat with old codgers. The additions on the bump likely keep two of Michael Foltynewicz, Aaron Blair of Matt Wisler out of the rotation to start the year. As for the addition of Phillips, it aces out Jace Peterson who posted a .350 OBP last season in 115 games, and it also means that uber-prospect Ozhaino Albies is likely to get another year of seasoning in the minors, barring injury of course.

Who is Phillips at this point? The 35 year old second baseman has appeared in 140 games in 10-of-11 seasons. The last two years he’s rebounded after a down 2014 hitting .290 both years with a total of 37 steals. Odd to see an aging player start to run again, he stole seven bases in 2013-14, so it’s difficult to envision a repetition of that “up” pace this season. The power is gone too (8, 12, 11 homers the last three years). He’s been pretty stable the last two seasons with 70 and 64 RBI and with 69 and 74 runs scored and the last two years the OPS has been .723 and .736, far from impressive, but pretty much right on his career .741 mark. He is what he is. A stable, unexciting veteran who is just a guy at second base in mixed leagues (he’s a middle infield option only).

As for the Reds, there is some thought to Dilson Herrera getting some time at second base. Herrera was a top-85 prospect in baseball according to Baseball America and Baseball Prospectus in 2015, so the kid can play. Last year in 110 games at Triple-A Dilson hit .274 with a .335 OBP and .456 SLG leading to 15 homers, 64 RBI and 71 runs scored. That leaves him with a .298/.362/.468 slash line in 563 minor league games. Not impressive, but a good looking line nonetheless. He’s a solid looking prospect, one without big power or big speed. Kinda just a guy is the outlook in the fantasy game when he develops, and it seems likely best case is for him to be an infield sub this season relegating him to NL-only leagues.

Make no mistake though, Jose Peraza has to be in the lineup on a daily basis for the Reds. He could see time at shortstop or the outfield as well, but I have to think that Peraza takes over at second base for the Reds. Really love this skills, so much so that I recently wrote Make Sure to Draft Jose Peraza. Love that guy’s skills a lot, especially those wheels.

Also, I need to mention the precipitator for this deal which happens to be the car injury suffered by Sean Rodriguez recently. Someone stole a car, hit the Rodriguez family and ended up dying in the collision. Rodriguez and his family are OK, but Sean has a shoulder issue and surgery is now deemed necessary with the recovery time being placed at 3-5 months knocking him so far down draft boards that he’s no longer an option in mixed leagues.

Adam Jones leading off? What an awful idea that the Orioles are thinking about going with in 2017. Such a terrible idea. Here’s why.

Obviously, Jones has done nothing as a leadoff hitter any different than the league average hitter last season.

Let’s look at the last two years. Jones versus the league average (all batting spots).

So, Jones has been a league average hitter the last couple of years, and his OBP has been well below the league average (last year he saw 3.48 pitches per plate appearances, 140th out of 146 qualifiers last season, a simply dreadful mark for a potential leadoff hitter). He also has a terrible approach where he will swing at any pitch in the air. A 31 year old Jones simply shouldn’t be batting leadoff. He doesn’t own the skills to do it. Never has. Sorry, just how it is. The team would be better off using Hyun Soo Kim, or even Seth Smith. At least those guys get on base. Oh yeah, don’t use Manny Machado either Orioles. He hit there seven times last season.