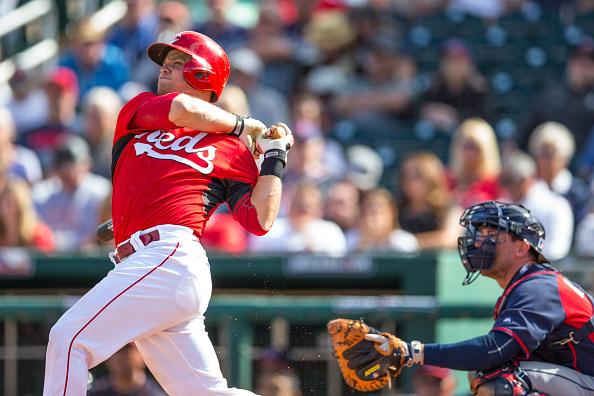 As most of us expected, the Reds will begin their march to the 2016 season with the expectation that the man to take over the 9th inning for the since traded Aroldis Chapman will be J.J. Hoover. The righty has all of five career saves in four seasons, and his numbers certainly don’t impress. Last season he posted a 2.94 ERA though both SIERA (4.36) and xFIP (4.62) suggest that was a highly fortunate number. Though he owns a K/9 rate of 9.05 for his career, the mark tanked last season down to 7.27 though his walks remained at an unsustainable rate (4.34 per nine). Oddly, it seems that he chose to give up strikeouts to generate more grounders – his 40.1 percent ground ball rate was more than 10 percentage points above where the rate was at the previous two seasons. He’s not likely to hold on to the role all season long. By the way Chapman, a louse of a human being, says he will appeal any suspension he is given by MLB for his offseason of domestic violence allegations.

Josh Hamilton had a pair of surgeries on his left knee since September of last year. As of now, he’s still feeling some soreness that they attempted to relieve with a cortisone shot about two and a half weeks ago. Didn’t seem to do the trick though as he’s still dealing with soreness. The soon to be 35 year old, in May, is simply breaking down. He’s only played 149 games the last two seasons and shouldn’t be drafted in any mixed leagues at the moment. None.

Matt Joyce signed a minor league deal with the Pirates. Who cares? For all the free agent movement check out our 2016 Free Agent Tracker.

Devin Mesoraco said on Thursday that his surgically repaired hip is feeling solid and that he’s nearly ready to go full bore. Manager Bryan Price said that he “hopes” that Mesoraco will be ready by Opening Day and that he will be able to handle a full-time role this season. I’m still suggesting extreme caution with Devin, just think it’s the prudent position to take.

Nick Punto announced his retirement from the game. Punto played for 14 years, rather remarkable given his skills, and retires with a .245/.323/.323 slash line. Every time his name comes up I think Billy Hamilton. Why? Check out Hamilton’s slash line which leads to a worse OPS than Punto at .242/.287/.330. Yikes Mr. Hamilton.

I don’t drink coffee except in one instance… when it’s an Irish Coffee. I tried a second option today when I swigged down a Java Monster Mean Bean drink. Pretty tasty though I still prefer Irish Coffee.

Don’t forget to pick up your copy of the 2016 MLB Draft Guide which includes more than 600 Players Ranked, auction values,

Fernando Rodney is dealing with a hamstring issue right now. He says he’s about 85 percent. He has plenty of time to gain health for the start of the campaign at which time he’s expected to serve as the Padres’ closer. The nearly 39 year old righty saved at least 37 games each year from 2012-14 before falling to just 16 last season. Rodney still gets the grounders (50.6 percent ground ball rate last season) and can generate the a few swings and misses (8.33 K/9), but boy has he never learned how to avoid the walk (4.38 per nine for his career and 4.16 last season). To see where he ranks check out the 2016 MLB Draft Guide from Fantasy Alarm.

The Royals signs Ross Ohlendorf, Brian Duensing and Clint Barmes Thursday. There may never have been a trio of vets signed, by one team on one day, that is less inspiring in the history of the game of baseball.

Pablo Sandoval will continue to switch hit after he hit completely from the left side in the second half last season after he began the year with two hits in 41 at-bats batting right handed. Sandoval, no matter which way he was swinging, was an unmitigated disaster in his first season in Boston batting .245 with 47 RBI and a .658 OPS over 505 plate appearances. Sandoval has always been a better swinger from the left side of the plate with a career slash line of .299/.352/.485 swinging the lumber from that side.

Mike Trout, arguably the top player in the game in 2016 – he certainly has been the past four seasons – will continue to hit out of the three hole to start the 2016 season with the Angels. He could move back into the #2 hole when Albert Pujols proves himself fully healthy, but even if he hits third all year there’s little reason to expect his numbers to change in any appreciable way.

Get your groove on, superhero style…