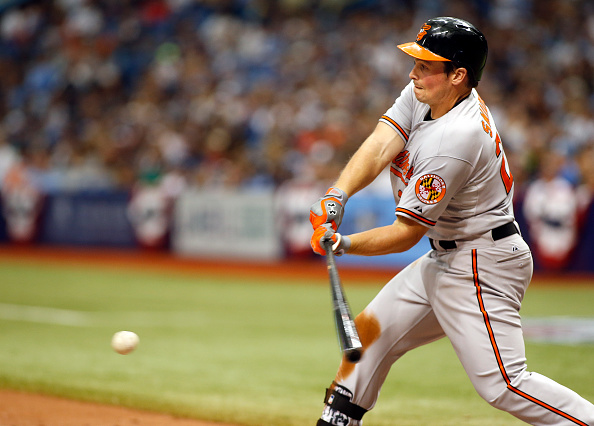 Travis Snider was drafted 14th overall in 2006 by the Blue Jays.

Yes Snider was at one time an elite prospect.

That was seven years ago.

Over the last seven seasons as a big leaguer Snider has never had 325 at-bats in a season. Not one time. He hasn't been able to convince his team to give him 325 at-bats in a single season in seven years. The following guys had 325 at-bats in 2014: Chris Young, Chris Denorfia, Andre Ethier, Mike Aviles, Bryan Pena, Sam Fuld, Ryan Ludwick... The point should be pretty obvious. For seven years no on trusted Snider with full time work, not even close.

'But Ray, he broke out last season.'

Snider has a 19.3 percent career line drive rate.
That's on the low end of the big league average.

Snider has a 1.40 GB/FB ratio.
That's not the number of a power hitter.

Snider has a 13.2 HR/F ratio.
The league average is 9-10 percent, so that's a good number for Snider. However, his 34 percent fly ball rate is league average so he's not exactly taking advantage of his ability to drive the ball into the seats.

It doesn't matter who is on the hill. Snider isn't very good in any battle. Here are his career numbers.

The one obvious positive for Snider to this point is his spot in the batting order. Through three games he has hit third twice and fifth once. Sorry, but that's awful. Snider is a 7th hitter in an AL lineup. He has no business hitting third. 'But Ray, he's hitting 3rd so take that!' My response? Matt Wieters and J.J. Hardy are currently out of the lineup. When they return do the Orioles leave Snider in the third slot? Can't see how it makes any sense that Snider doesn't drop down to at least 6th in the order, potentially lower, when the squad is healthy.

Sorry folks, there just isn't anything to see here that suggests Snider has the skills to be a fantasy star. Could he be a solid option in 2015? That's possible, but again, the numbers say the only way that happens is if he convinces the Orioles to give him 500 at-bats. With what figures to be a fairly crowded lineup once healthy, it's difficult to envision Snider playing every day long enough to get there. He's nothing other than a fifth outfield option in mixed leagues, and not a particularly intriguing one at that.