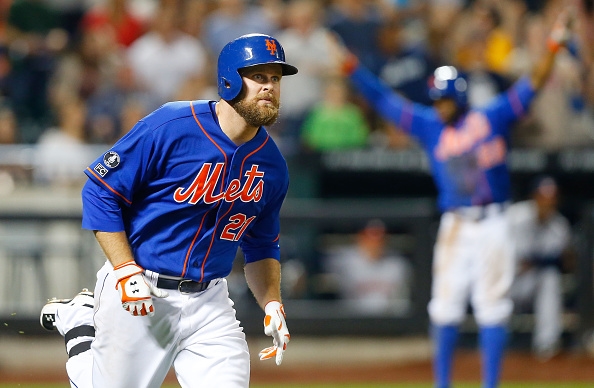 Lucas Duda may not have even been drafted in your mixed league last season. When the season wrapped he had blasted more than 30 homers an nearly driven in 100 runs. His effort was one that went a long way to propelling folks to a few fantasy championships. The question now becomes can he improve against lefties and repeat his strong work against righties or will he be doomed to disappoint in the coming season?

There were 11 men in baseball who hit 30 homers last season. Duda was one of them.

There were 24 men in baseball who had 90 RBIs. Duda was one of them.

Power is hard to find.

Duda has struck out 23.2 percent of the time (K/PA). Another way to say it. Per 550 at-bats he's averaged 148 at-bats. Not horrible, but certainly not impressive.

Duda had a 20.4 percent line drive rate last season and the mark is 21.2 percent for his career. Those are both solid marks.

He hits too many fly balls leading to a 0.72 GB/FB mark. That helps the homers - see below - but it's a death blow to his batting average. You just cannot hit that many balls in the air and produce a strong batting average. Another way... there were five men in baseball who had a fly ball rate of 48 percent - Chris Carter, Duda, Moss, Luis Valbuena and Yoenis Cespedes. Here are the five fellas batting average.

You thinking Duda steps forward in the batting average category in 2015?

Duda had never had 500 at-bats in a season before 2014 so it's not fair to say he hadn't hit X amount of homers before, but I'm still going to do it. Prior to last season Duda had never hit more than 15 homers in a season. He socked 30 last year. More homer information...

(1) Duda had a 49.0 percent fly ball rate last season. That was a career-high. The mark was 44.5 percent before last season. Can he maintain that rate, the second highest in baseball last season behind Chris Carter (51.4 percent)? Heck, would he want to... really?

(2) In addition to reaching a career best fly ball rate, Duda also had a career-high 16.0 percent HR/F rate. The mark was 12.2 percent before last season. His minor league mark in the minors (2011-13) was 14.0 percent so it's not like 16.0 percent is crazy, but I'm merely noting that the number was a career best.

As you can tell, I'm dubious that he will record 30 homers again. We'll get back to that when we talk splits later.

Duda has produced, despite the poor batting average, a .350 OBP the last two years. That's solid work. He takes some walks, gets hit by pitch a few times, and there you have it. In fact, from 2013-14, among batters with at least 900 plate appearances, his .350 OBP is the 39th best mark in baseball. He should score runs.

As for RBIs, as we saw above, 90 is a big number anymore. In addition to the league context, there are also a few other things to note with Duda. Here are his OPS marks the past three years with runners on base.

Here are his OPS marks with RISP and two outs the last three seasons.

Is he really going to continue being Miguel Cabrera? Do I need to really analyze this? It will be very hard for Duda to match or improve upon his 92 RBI mark unless his workload increases.

Here is a big concern with Duda. He cannot hit lefties. Here are his yearly slash marks against lefties the last three years.

For his career, here you are.

Duda is basically a Adam LaRoche level hitter against righties and he's basically worse than Chris Johnson against lefties. He should never face lefties late in a game, and it's certainly defensible that he should be on the bench against lefties, at least those that are upper level performers.

Might also want to consider that there are some pitches he just doesn't hit. From Brooks Baseball...

Duda can't hit the slider, curve ball or split. Just can't. He also really can't hit the change up. Basically, the off speed pitch vexes him to the point that it's odd that any catcher would call a fastball when Duda is at the dish.

Duda appeared in 146 games at first base, 136 starts, and just one game in the outfield last season. He obviously should only qualify at first base in the majority of leagues this season after qualifying at both spots last year.

Duda is just there. He's got legit power, 25 homers is possible, but there really doesn't seem to be much to suggest a repeat effort is coming. Even if it does, there's almost no reason to believe there will be any growth. Duda is a limited bat that should bring back fantasy thoughts of a declining Adam Dunn or a modern day Brandon Moss (Player Profile).

10 team lg: He should only be started when a righty is on the bump in this format. He's got no speed, won't help in the batting average category either, so when there isn't a righty out there he should be on your bench.

12 team lg: A corner infield option but not the kind of guy you want starting for you at first base. My advice would still be to try and get a third base option as well if you roster Duda in this format. I worry about a prolonged slump.

15 team lg: I'm still not targeting Duda to be my starter at first base in this format. Not awful to do it, but I'd rather have guys like Adam LaRoche, Eric Hosmer or Brandon Belt ahead of Duda.

NL-only: I'm going to say it. If I'm in a 10-team NL-only league, I don't want Duda to be my starter at first. Too far? Maybe, but that's how we've currently got things in the Fantasy Alarm rankings as of this writing.