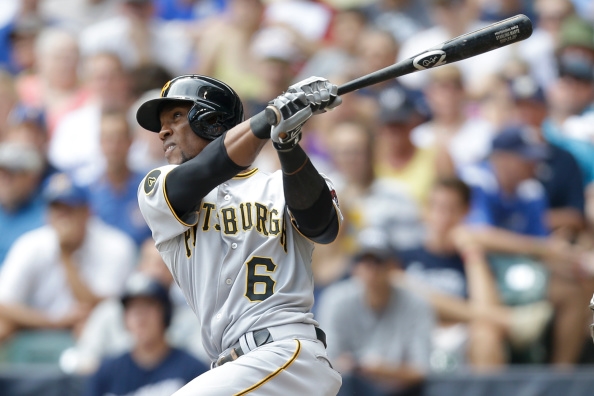 Starling Marte is a dynamic athlete. Fleet of foot, he's going to steal a ton of bases for the Pirates. He'll be many a persons second outfielder in mixed leagues, and you'll find him being taken very early in the majority of drafts this season. Are there reasons to think that folks investing that heavily in Marte will be rewarded with a big time performance or might he just keep on keeping on, a hair below the elite at the position?

2009: Appeared in 68 games in the Dominican Winter League, Rookie Ball, Single-A and High-A. He hit .305 with three homers and 26 steals while scoring 44 times.

2013: In his first full season he hit .280 with 12 homers, 35 steals and 83 runs scored. Also stole 41 bases but was caught a league leading 15 times on the bases. Missed almost three weeks with a finger sprain helping to limit him to 135 games overall. Marte and Carlos Gomez were the only two players in baseball who stole 40 bases, scored 80 runs and hit .280.

2014: Appeared in 135 games for the second straight season hitting 13 homers with 56 RBIs, 73 runs scored and 30 steals. Suffered a head injury that kept him out of action for more than two weeks.

Check out the ADP information that's out there and you will see Marte often going in the 10-15 range amongst outfielders. That's not an elite level, but obviously extremely close to it. Will Marte take the next step in 2014? Let's break down the skill-set starting with batting average.

Given his approach, and I keep trying to tell people this, it's extremely tough to think that Marte will hit .300 in 2015. As you can see, batters with his BB/K ratio just don't hit .300 with only one man in six years hitting .300 with a number as low as Marte in the BB/K ratio. It's exceedingly difficult to do.

It should also be noted that his BABIP is insanely high. In his two seasons of full work Marte has posted BABIP marks that are out of this world. His 2014 mark of .373 led baseball. In 2013 the .363 mark he posted was 8th best. The only man in baseball who can better the .368 mark that Marte has the last two seasons is Chris Johnson at .369. Points of data.

None of that means Marte won't be able to keep his mark that high, it's just a nod to the fact that he's doing something right now that only one other man in baseball is doing.

I've heard people say things like '15 homers seems to be a lock with Marte and I wouldn't be at all surprised if he hit 20 homers.' My response? Why do you believe that person X? What's the data to support that contention? The honest answer is that there is none.

Remember, the league average fly ball rate is about 34-35 percent. Marte is well below that. Even with his solid 12+ percent HR/F ratio, a run to 20 homers is extremely unlikely. Marte just doesn't hit enough balls in the air.

Marte also doesn't have much overt power to speak of. His Isolated Power (SLG-AVG) mark the last two seasons has been .161 and .162. The league average is .139.

Marte has hit leadoff 188 times in his career. At no other spot in the batting order has he appeared more than 31 times (second). As a top of the order man in the National League his RBI total is far from impressive. In 2013 he drove in a pathetic 35 runs. His total of 56 last season was a solid improvement, though adding another 21 RBIs in 2015 is a fool's errand to chase. He's just not going to help much in the RBI column.

As for runs scored, well, that goes back to the batting average discussion above. Marte never walks. As such his OBP just isn't as impressive as it could be given his skills. Still, his OBP the last two seasons is .349, well above the .321 career mark. Marte has scored 83 and 73 runs last season, an average of 78 a season. The real key to him boosting his runs scored mark is merely volume. Marte needs to appear in 150+ games, not be limited to the 135 he's posted the last two seasons. With slight growth, and simply healthy, his first 90-run season is certainly possible.

Marte stole 41 bags in 2013 and then followed it up with 30 last season. His total of 71 thefts the last two seasons is tied with Ben Revere for 7th in baseball. Marte will steal bases. However, without an increase in the walk category he's really dependent on two factors.

(1) The aforementioned games played increase.
(2) The hit by pitch.

You might have wondered how a guy who never walks has been able to post an OBP that is .050 points clear of his batting average the last two seasons? The answer is the HBP. Marte was plunked 24 times in 2013 and 17 times in 2014. No player in baseball has been hit by pitches more the last two seasons. Those extra 20+ times on base a season certainly helps Marte to get on base to keep the steals coming.

Alas, Marte has also been caught stealing 26 times the past two seasons, the most in baseball. Improving his theft percentage would go a long way to allowing him to steal more bases than the 36 bases he's averaged the last two seasons.

Marte has been injured a good deal during his Pirates career. In 2013 he missed times with a hand contusion, trunk soreness, and a finger sprain. In 2014 he missed times with lower back tightness, thigh tightness, a head injury and an elbow contusion. He's young, and it's likely a blip on the radar, but note that he's yet to appear in 140 games at the big league level.

Marte is a great talent who is 26 years old with two full seasons under his belt. He also doesn't walk, has moderate power, depends on an astronomical BABIP and is a poor percentage base stealer. Don't mistake that for me saying that Marte will bust in 2014. That certainly will not happen. However, the season of growth that many are predicting may not be quite as grand as that throng of supporters would lead you to believe unless he addresses some obvious weaknesses in his game.

10 team lg: A second outfield option based on his speed and spot in the batting order. At 26 it's always possible his skills improve, even if there aren't many overt reasons to expect that.

12 team lg: A strong second outfield option who could be an OF1 depending on how your draft plays out. Hard to predict substantial batting average growth, but going back to his minor league days where his BABIP was in the .390's, it seems that Marte is a stable batting average option as well, even if I'm not sold on growth.

15 team lg: Love him here. As noted, growth in the power column doesn't appear likely, but this overall game can be difference making in a league this deep.

NL-only: He will be someone's first outfielder. I don't love that idea given the likely lowish HR/RBI marks, so if you tab him make sure you find your oomph elsewhere.