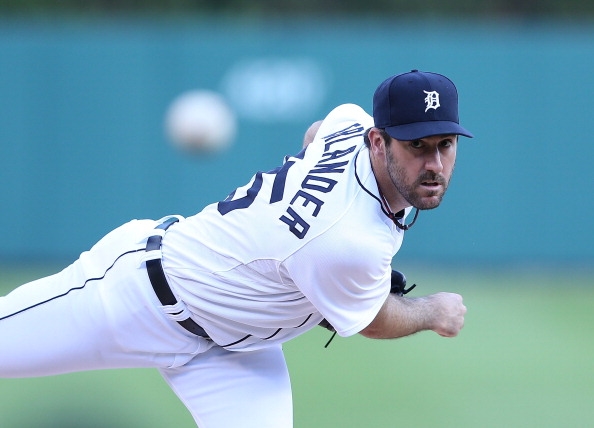 Justin Verlander won the Cy Young Award in 2011 and has finished in the top-5 in the voting on three other occasions. He's also been named to the All-Star team six times. That's the old Justin Verlander. Presently he's nothing more than a league average arm grasping at the straws of his former greatness. Will a healthy offseason, coupled with a positive weight gain, help him to turn back the clock?

2004: Taken 2nd overall in the 2004 Entry Draft by the Tigers out of Old Dominion University.

2006: Ranked as the 8th best prospect in baseball according to Baseball America.

Then it started to go down hill.

Why did Verlander struggle in 2015? Some options...

Some will suggest that he had core muscle surgery last offseason and that set him back to start the year. OK, that's part of it.

Some suggest it was because he lost weight cause he couldn't train properly and that effected him (he gained 20 lbs this offseason). OK, that's part of it.

Some suggested it was Kate Upton. Finally an excuse I can believe in. I mean, how much energy would you have if you got to go home to her each night?

Hypothetical stuff aside, I like to deal in facts and there are OBVIOUS reasons that Verlander has struggled in recent years.

Verlander's velocity is in decline. Doesn't take rocket science to figure that one out. From Brooks Baseball:

If charts aren't your thing, here are the numbers by year of his fastball's velocity.

His velocity has gone down 5-straight years and he's lost three mph in total. It may not sound like much, but that's a huge dip. Can't overestimate the impact the lost velocity has had on his performance.

Verlander's thrown a crap-ton of innings and pitches in his career, an easy reason to explain the lack of sharpness on his pitches.

From 2007-14 Verlander threw at least 200-innings each season. Mark Buehrle and James Shields are the only others in that group.

No one in baseball has thrown more pitches than Verlander since 2007 who has tossed 29,375 pitches. The next closest man on the list has thrown nearly 2,000 fewer pitches - James Shields (27,469 pitches).

Father Time waits for no man.

As a result his performance has taken a sharp down turn.

The last two seasons Verlander has a 3.99 ERA.
The American League average is 3.99.

Let's talk strikeouts for a moment. In 2014 Verlander's strikeout rate was... let's just compare him to others from 2014 shall we?

The loss of strikeouts is reflected in his swinging strike percentage. After 3-straight years with a mark in double-digits he posted an 8.7 percent mark last season.

Batters out the bat on the ball at a higher rate than at any time in the last six years. Batters hit the ball on 81.4 percent of their swings in 2014. The mark had been under 78 percent the previous three years.

When batters swung at pitches inside the strike zone they had an 86.7 percent contact rate. That mark was a 6-year high.

Here are the OPS marks that he's allowed on his fastball the past four years according to PITCHf/x data.

It's not just his fastball that is at issue here either. Overall, batters are just having more success, fastball or not. Here is his OPS allowed the last four seasons:

Whatever he throws they are hitting it.

His career line drive rate allowed is 20.2 percent. The last three years the mark is 21.5 percent.

So let's review the irrefutable data. The velocity on his heater is down. The swinging strike rate is down. Batters success against the heater is going up. Heck, batters success against all his pitches is rising. He's got copious amounts of pitches on his arm. Do you really think the 32 year old is going to turn that around in 2015 just cause he's Justin Verlander? Where is the support for that? How did the loss of velocity go for guys like Lincecum and CC Sabathia?

It's not as simple as this, but there's a lot of truth in the following statement:

Justin Verlander's arm is wearing down, and losing three mph from his fastball has taken him from being an elite arm to being a league average hurler.

Think that's nuts? Figured you might, so here's some more data.

How bad was Verlander last year? He was AWFUL. Let's run an experiment. What happens if we remove Verlander's name and just look at the numbers. Objectively, what would the tell you? His 2014 effort follows, along with a few other flunkies.

Who are those arms?

Gonna leave some space so you don't cheat and see the names just yet.

When you can legitimately compare Verlander to those three arms, and literally not be able to tell a difference while at the same time suggesting that he might be the worst of the group... at least he has Kate Upton.

Here's some audio of Kyle Elfrink and I discussing Verlander on SiriusXM Fantasy Sports Radio.

"That's the best I've seen Ver stuff-wise, off the mound, since I've gotten this job," said Tigers' manager Brad Ausmus after watching Justin throw on March 1st. Does that mean anything for 2015? Here's a fact. If we remove Verlander's name from his efforts you wouldn't be interested in drafted him. Go with that. Go with the data and not your heart. Could Verlander recapture some of his lost glory in 2015? Without a doubt he could. But keep repeating this to yourself: since the start of the 2013 season Verlander has barely been a league average hurler: 28-24, 3.99 ERA, 1.36 WHIP, 9.23 hits per nine, 7.97 K/9, 2.97 BB/9. To reiterate - it's a point so many seem to be missing - VERLANDER HAS BEEN A LEAGUE AVERAGE ARM FOR TWO YEARS. Draft him as a mid-level arm if you wish, but don't be foolish and make him one of the top arms on your club as you will be sorely disappointed.

10 team lg: Verlander is a bench arm for me in this setup mean he's not going to be one of the top-6 arms I target to fill my starting pitcher roles.

12 team lg: A fifth starter option. Comes down to cost with Justin. If you can take him outside the top-50 starting pitchers you can support making that investment. If he's more costly than that, let someone else worry about Verlander.

15 team lg: The deeper the league, the more willing I am to take a risk. Still, I don't see much, you did just read my thoughts, to suggest that things will turn around appreciably in 2015. Remember, while he was awful last season he's been average the last two seasons. Does offseason surgery in 2014 explain that?

AL-only: If I could say - well at least you're getting 190 strikeouts - then maybe I could be more bullish. But I can't make that statement with certainty. Given that he's had worse than league average ratios the past two seasons I would extreme levels of caution before you blindly make him your 2/3 starter, even in this format.