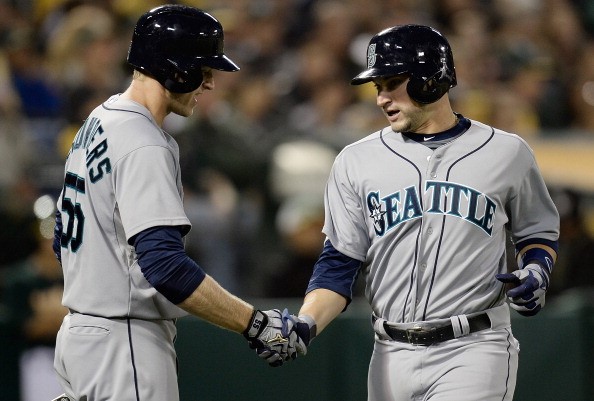 Michael Saunders almost went 20/20 in 2012. He didn't, falling one homer short, so it's like the run to success never happened in the eyes of most (we just love our round numbers). A constantly injured yet intriguing athlete, perhaps Saunders has a new lease on life now that he's been dealt from Seattle to Toronto (I would be remiss if I didn't note that Saunders was born in British Columbia... that's in Canada). Can he stay healthy and produce a season that his talents dictate is possible? We won't know the answer to that question until the season is over, so let's just break down the player and see what we find.

NOTE: Saunders tore the meniscus in his left knee when he accidentally stepped on an underground sprinkler. Initial reports suggested he would miss a good deal of the first half after undergoing surgery, but it now sounds possible that he might even be ready to go on Opening Day. Kevin Pillar seems likely to get a crack at the everyday job in left field while Saunders is sidelined.  For more on Pillar, see the bottom of this piece.

2014: Saw action in 78 games hitting eight big flies while stealing four bases for the Mariners. In December Saunders was dealt to the Blue Jays in exchange for J.A. Happ.

The Condor, what a nickname, has dealt with a myriad of issues over the course of his career that have caused him to miss games. Here are the significant issues he's experienced.

Saunders has yet to appear in 140 games in a big league season and last year appeared in a mere 78 games. His track record of health is poor. It's one of the reasons his draft day cost will be muted. People don't trust him to stay healthy. That point of view could represent a nice buy low opportunity.

Saunders has a nice power/speed combo, pretty obvious to say that when a player nearly goes 20/20 in a season. Still he's stolen just 17 bases the last two years while being caught 10 times. He's not likely to steal 20 bases with a success rate of 63 percent, and in fact all that running the past two years has actually hurt his teams chance of scoring more than it has helped. He will need to be more discerning like he was earlier in his career (his success rate on 47 attempts his first four seasons was 79 percent). As for the power, let's explore.

Saunders owns a 10.9 percent HR/F ratio for his big league career. That's only marginally above the 9-10 percent mark that the average major league batter has owns. Still, it should be noted that over the last three seasons the mark is higher at 13.3 percent, a more interesting number.

Does Saunders lift the ball? Again, slightly better than the league average player. The aforementioned "average player" has a fly ball rate of 34-35 percent. For his career Saunders owns a 39.1 percent mark. That's far from a "big boy" number, but it's far enough above average, which when coupled with his above average HR/F ratio, that is signals a run to 20 homers is certainly possible with full-time work. Saunders also owns a solid Isolated Power (SLG-AVG) mark the past three seasons of .185, .160 and .177. The league average in that time is .151.

What about the batting average category? It's admittedly not pretty. For his career Saunders has hit .231, twenty points below the league average last season. Still, he has hit .248 the past three seasons which is dang near a league average mark during that time. Breaking things down further.

Saunders owns a league average type of number in the line drive column at 19.5 percent for his career though the last three years that mark has been 21.2 percent. Solid, but nothing outstanding. Ditto his .290 career BABIP mark. Again, the last three seasons though he's better with a mark of .304.

Does he walk? Not really. his 9.2 walk rate is fairly normal stuff. The number is a bit up at 9.6 percent the last three years.

Does he strike out? Too much. His 25.5 percent career rate isn't good and has led to 309 strikeouts in his last 349 games. At least the number is a little lower the last three years at 24.1 percent. Not just that, but his swinging strike ratio is certainly going in the right direction. After an 11.4 percent mark in 2012 he's lowered the mark to 10.4 and then 8.4 percent the last two seasons.

The last two seasons his percentage of swings on pitches outside the strike zone is at 22.5 percent, about six percent below his mark of 28.6 percent prior to 2013. That's significant improvement. Saunders has also lowered the amount of pitches he swings at the past two seasons. Here is that rate the last three years: 48.7, 43.9 and 42.5. Seems like he's becoming a bit more discerning.

The splits are something to consider with Saunders. Check out his career numbers.

He's obviously marginally better against righties. There's also this. He's moving from a ballpark in Seattle that suppressed hitting to one in Toronto that celebrates it, and that certainly can't hurt a guy who has had more struggles at home than on the road.

Standing 6'4" and weighing in at 225 lbs, the lefty swinging Saunders brings skills to the table that are enticing in the fantasy game. His blend of power and speed makes him a target on draft day provided one can work around the obvious limitations in his game (chiefly batting average). Saunders has improved as a performer the last three seasons and has a shot at daily playing time in Toronto when he proves himself to be healthy. Saunders value is all about his health.With it he's worth drafting as a 6th outfilder in 12/15 team leagues. He's a risky player to go all in on given his health concerns and obvious offensive holes, but with playing time he's very likely to far outpace his draft day cost... perhaps by a huge amount.

Pillar will get first shot to fill the open left field spot with the Blue Jays now that Saunders is likely to miss half the season (the Jays could also attempt to make a trade of course and they could also give Danny Valencia some time there against left-handed pitching). Who is Pillar? A quick review follows.

Pillar is a 26 year old outfielder who bats/throws right. Like Saunders, he has a decent power/speed combo. Of course, he hasn't shown any of that at the big league level through two seasons.

Pillar has a stroke that could hit 10-15 homers, but his power isn't on par with that of Saunders. However, he has more base stealing speed and acumen than Saunders. Easy to see that. In 100 games at Triple-A last season Pillar swiped 27 bases. Back in 2012 he swiped 51 bases at Single-A ball. If he gets on, he can run.

Pillar doesn't always control the strike zone well however. Through 218 big league at-bats he's struck out 57 times leading to a poor 24.6 K-rate. He's also walked, get this, eight times in total. I just don't understand how someone can do that. How hard is it to take balls? These guys that have no idea how to work the count, wait until they get their pitch, force a hurler to come into them... it just astounds me that batting coaches don't force these guys to take some pitches while stressing the benefits of the walk. It's not just a phenomena of being at the big league level and being overmatched either. Pillar has walked a total of 106 times in 441 minor league games. Thus far his 89 game BB/K ratio with they Jays is 0.14. Atrocious.

He has struggled mightily against righties in his young career. His strikeout rate against righties is 29 percent and his slash line has resulted in a .583 OPS (.217/.250/.333). He's simply going to have to do a much better job if he expects to find regular playing time.

Pillar's minor league track shows a .320 batting average and 121 thefts in 441 games. It would seem like success could follow him to the big leagues. At the same time he's looks lost in the bigs in two seasons, is already 26 years old, has little understanding of how to work the count and has been unable to figure out righties. Until he solves those issues, even with a daily spot in the lineup with the Jays, he's not likely to produce much mixed league value.