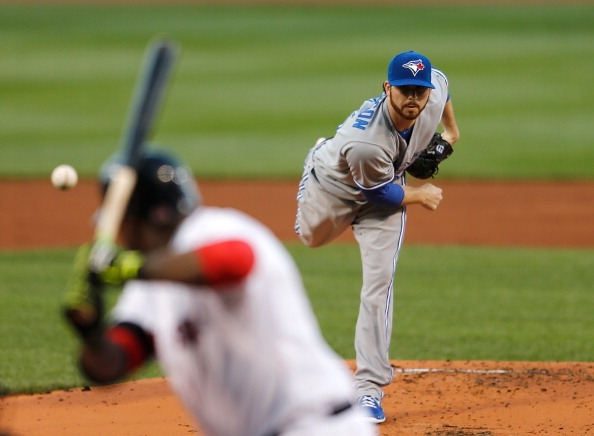 Drew Hutchison throws hard, strikes batters out, and can tear through a lineup with relative ease. He also had some rough outings, pitches in a hitter's park, works in the AL East and has some durability issues. Can he put together 30 consistent starts in the coming campaign while offering a relatively cheap source of strikeouts?

I wonder how many people know the following...

Drew has already had Tommy John surgery, so let's hope he won't be having elbow issues for a few years. Not very scientific, but fair to think that way i would surmise.

As for the on the field work...

Hutchison isn't exactly an overwhelming heat tosser with an average fastball hurtling toward home plate at 92 mph. He also throws that fastball 68 percent of the time, a very high total. His fastball work breaks down like the following: 50 percent the four seamer with 18 percent of the heaters being the sinking fastball. Judging by the the results on the pitches, he might reconsider throwing the sinker that frequently since it appears batters simply mash the pitch. His career numbers from Brooks Baseball...

Hutchison should throw his slider more frequently instead of just to put away hitters later in the count, something he at least started to do in August and September even though that increase isn't really reflected in this table from Brooks Baseball which looks at the entire season (the last two months he did up the pitches usage about 10 percent).

I should also note that later in the year he threw the slider slow and got more movement on it than previously.

That's pretty dang interesting, as is the fact that his performance also improved in the second half.

Hutchison also tries to throw a third pitch, a change up, but as the charts show he doesn't have much success with it. Really, he's a two pitch pitcher who is searching for that third pitch, and many starters are never able to take that next step until they develop that third pitch (it's why so many fail as starters but excel as relievers where they can focus on their two best pitches and blow hitters away for an inning instead of having to face them 2-3-4 times in a game as a starter). Perhaps the refinement of his slider late in the year will help remove some of those doubts.

I've noted a couple of times the strikeout mark, and 184 punchouts in 184.2 innings last season is intriguing to be sure. Too bad his walk rate is barely better than league average stuff with a 2.92 mark last season an a 2.96 mark through 43 big league starts. He displayed better control in the minors (2.4 per nine) but until he shows that at the big league level we have to accept the level he currently sits at.

As a rookie he had a 44.6 percent ground ball rate. He undergoes Tommy John surgery and returns to a 36.1 percent ground ball rate last season. The two year result is a 0.92 GB/FB ratio to which I would say ugh for a guy pitching in the AL East and in Toronto half the time. It's therefore not shocking therefore to see that his career mark in the bigs in the homer per nine column is 1.15 (the league average last season was 0.90). Given that Hutchison has a 10.7 percent HR/F rate in the bigs, which is only a slightly elevated mark (9-10 percent is considered average), he simply needs to do is to focus on keeping the ball down in the zone because if he posts another 45 percent fly ball rate this season, like he did last, there isn't likely to be much improvement in his game, at least in terms be being taken deep into the cheap seats (as a minor leaguer his GB/FB ratio was 1.17 and his HR/9 rate was microscopic at 0.34 so perhaps there is a slight hope for the coming season).

Finally, the issue of splits is a real one for Hutchison. He's yet to find a way to put away big leaguers who hit from the left side of the plate.

Hutichson is obviously locked into the rotation with the Blue Jays. Their top-4 will look something like this: R.A. Dickey, Marcus Stroman, Mark Buehrle and Hutchison. The fifth starter could be Aaron Sanchez, if he doesn't close, or Daniel Norris if he does.

The strikeout figures to be a big weapon for Hutchison again in 2015, and with what appears to be an improving slider another run at a whiff per inning seems possible. However, he also owns a 4.51 ERA and 1.28 WHIP for his career, hardly the marks of a pitcher who appears to be on the cusp of taking a quantum leap. Drew needs to find a way to be more effective against lefties, and a return to a more ground ball centric approach could also do wonders for him. He could take a step this season with those adjustments, and given his low draft day cost he's well worth investing in.

10 team lg: A sixth starter or basically a reserve round add in many instances. The strikeout potential is intriguing, but with a possible outcome being an A.J. Burnett / Ubaldo Jimenez type of effort - lots of strikeouts with middling ratios - it's wise not to put too many eggs in this basket in a league that is this shallow.

12 team lg: A 5/6 starter who could give you a nice boost since many may overlook him because of last year's ERA or because he pitches in Toronto. The second half improvement, and growth in his slider, is intriguing.

15 team lg: Once you get outside the top-50 amongst starting pitchers there start to be questions. Health, durability, a lack or ratio or strikeout strength often crop up. You could go for a solid vet like Ervin Santana, throw a total dart at a guy like Taijuan Walker or turn your sights to a guy like Hutchison to help round out your starting pitching staff.

AL-only: An intriguing arm because of the strikeout totals. His ratios worry me a bit because 200-innings with a league average WHIP and an above average ERA would not be a good thing. I would still invest of course. Drew should be an SP3 in this format.