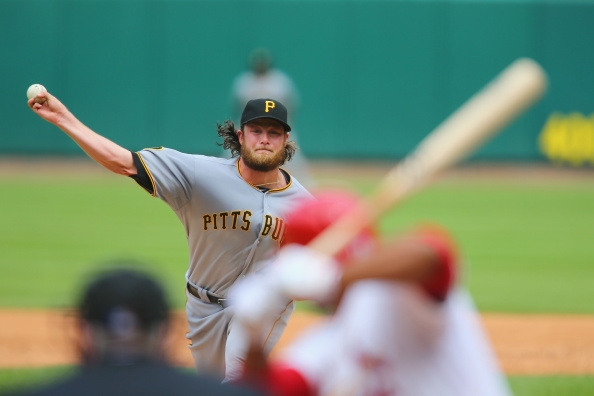 Gerrit Cole looks the part. He stands 6'4", weighs 240 lbs, and when he's right he can tickle triple-digits on the radar gun. Catch him on the right day and you think Cy Young winner. Unfortunately, most of the time that Cole takes the hill the results are solid but just not as good as your eyeballs tell you they should be. Can Cole use his uber-talented right arm to vault himself into the upper echelon of fantasy starters in 2015 or will he remain a slightly under performing arm that continues to leave his owners wanting a bit more?

Cole could be a star. It's always been predicted for him, so it would appear that it would only take a fulfillment of his talents to make it so. Can he get there in 2015?
First off, Cole has yet to throw 140-innings in a big league season to this point so he's still relatively young in terms of his big league development. Injuries have thrown up a roadblock no doubt, but let's also give this guy some time to develop. The upcoming season will only be his third in baseball, and for every Jose Fernandez that bursts onto the scene there are about 700 other guys that just take a beat of seasoning. Take an easy example. Through two big league seasons...
G. Cole: 21-12, 3.45 ERA, 1.19 WHIP, 8.39 K/9, 3.50 K/BB in 255.1 innings
Kershaw: 15-16, 3.36 ERA, 1.33 WHIP, 9.20 K/9, 1.99 K/BB in 278.2 innings
It's OK to admit you're amazed by that comparison.
The fact is that we simply assume too much, too soon with all these guys. I mean look again at those numbers. Through two seasons Cole has been a better pitcher than Clayton Kershaw, the best pitcher in baseball, was in his first two seasons. Remember, Cole was no solid prospect, he was the first pick in the country in 2011 (Kershaw went 7th in 2006). Fact is, both were elite prospects that were expected to dominate batters as their team's ace. One man has gotten there with time. Will the other arrive this season?
Cole throws a 95-96 mph fastball as the average, but he can hit triple-digits from time to time. Cannon is a term that comes to mind. "So why doesn't he strike more batters out than the 8.39 per nine he's posted thus far?" says Ray, noting that is still an impressive mark. The reason is he throws his fastball so dang much. How does that make sense? The truth is that while we're all impressed by heat, the fastball is actually the pitch with the lowest strikeout rate as the off-speed offerings generate a higher percentage of strikeouts. Cole throws his fastball 66 percent of the time. It's a huge number when compared to his curve ball (14.5 percent) and slider (13.4 percent) rates (he also throws a change up about six percent of the time). As you can see from the data over at Brooks Baseball, the strikeout rate on his fastball is literally less than half the rate he has on his change up, slider and curve ball.

Let's not overlook the fact that Cole did strike out 138 batters in 138 innings last season, so it's not like he didn't impress as his K/9 rate went from 7.67 to 9.00. Can that mark show any growth or is he more likely to regress to the 8.39 mark he owns for his career? Time will tell, but given his reliance on the fastball, despite having solid secondary pitches, it's safer to expect a number more in line with his career rate than growth in 2015 though growth cannot be ruled out.

So why does Cole throw his fastball so much if his other pitches are solid offerings? He wants grounders, so he pounds the strike zone with it. What he gets from that sinking fastball is an impressive ground ball rate. As a rookie the rate was 49.1 percent. In his second season the rate was 49.2 percent. The last two seasons, among hurlers who have thrown at least 250 innings, the 49.1 percent ground ball rate of Cole is 31st best in baseball (only six men have a mark of 55 percent led by Dallas Keuchel at 60.0 percent). This might not be ideal for the fantasy game where we would like for Cole to try and ratchet up the strikeout rate, but the fact is this is exactly what you should be looking for in a pitcher - strikeouts and grounders. Would I give up a K per nine innings for five points in a ground ball rate? Personally I would. This trend, to go for the grounder, also enables (theoretically) Cole to work deeper into games because he's not throwing as many pitches as others. Among pitchers who threw at least 120-innings last season Cole threw 3.85 pitches per plate appearance. Forty nine pitchers threw more pitches per batter. Cole also threw 15.9 pitches per inning. Sixty-nine men threw more pitches an inning. Fewer pitches = deeper in games = a higher probability of picking up wins. At least in theory. One other plus with all the grounders - Cole has allowed only 18 homers in his young career, a 0.63 per nine rate.

Strikeouts, grounders and... a lack of walks. That's what really intrigues me before I dig into a hurler. Let's hit on the third leg of that triangle next.

Cole has posted a 2.40 BB/9 mark through two seasons. Is that elite? No, but it's certainly in the 'it makes Ray happy' category. Among pitchers who have thrown 250 innings the past two seasons Cole's walk rate is 43rd best in baseball. Add up the strikeouts and walks and you get a K/BB ratio of 3.50, the 28th best in baseball.

Cole seems rather impervious to splits as well.

So what's holding back Cole from stardom? Nothing really. I guess you could look at the .310 BABIP mark he's posted and think to yourself that mark should be a tad lower, but really it's likely that it's the game of expectations that is holding back this power righty. With a full season of health, and only a smidge of growth, Cole could emerge as a top-20 starting pitcher in 2015. He's got the talent to be one of the most dominant righties in baseball.

10 team lg: If you're fortunate enough to roster Cole as your SP3 consider yourself to be in really good shape. If you have to take the plunge as your SP2 that's OK, just make sure you aren't reaching in the early rounds to make that happen.

12 team lg: A solid SP2 if you aren't going to jump into the mix early. If he merely maintains his ERA, WHIP and K/9 from last year over 200-innings, you will be #winning.

15 team lg: An ideal SP2. Strikeouts, grounders and no walks. Repeat that mantra.

NL-only: On the cusp of being an SP1. Given that he's been injured the past two seasons, I would like to support Cole with a veteran who I know will throw plenty o' innings.