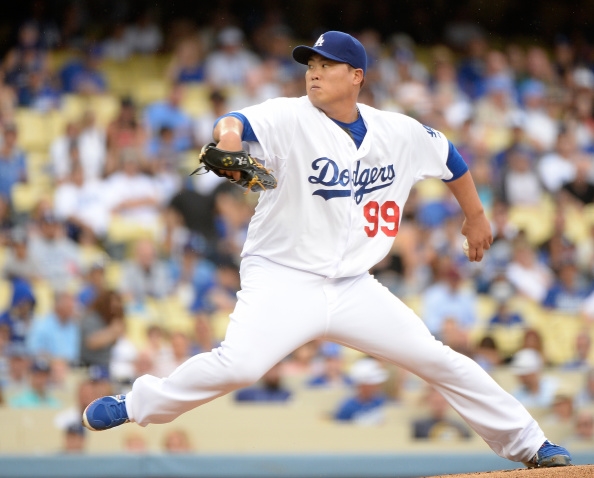 Hyun-Jin Ryu has won 28 games in two seasons with the Dodgers. Far from a physical paragon Ryu, who stands 6'2" and weighs about 255 lbs, has pretty well mowed through big league hitters with the success of another foreign born import - Hiroki Kuroda. Can the soon to be 28 year old lefty - his birthday is in late March - improve upon his first big two big league seasons or should we simply be satisfied with his ability to offer a third season of similar success?

He had Tommy John surgery in high school.

In 2006 he became the first player in league history to win the Rookie of the Year awards and MVP. He won the pitching Triple Crown as well.

GET YOUR COPY OF THE 2015 FANTASY ALARM BASEBALL DRAFT GUIDE AND DOMINATE. CLICK ON THE LINK TO FIND OUT HOW TO PICK UP YOUR OWN COPY... FOR FREE.

Ryu may not be the most athletic guy to look at, but he can pitch. The numbers through two seasons show stability and ample talent. Let's blast through them.

Ryu added a batter to his K/9 mark. How? His fastball velocity went up have a mile per hour to 90.9. That doesn't explain it. He threw his fastball 52.3 percent of the time after a 54 percent mark as a rookie. That doesn't explain it. He threw his slider two percent more, but he did thrown it two mph harder. He threw his curveball four percent more with an added mph. He also cut his changeup percentage by about four percent, and he also threw that pitch two mph. Looks like he had a bit more velocity and changed up, at least a bit, how he attacked batters. His swinging strike percentage went up 0.7 to 8.8 percent. Fact is he just showed a tad more refinement and added a tick or two in velocity as well.

As for his walk rate... an already impressive mark became elite in 2014 (only 12 men were better). The reason for the improvement was his work against lefties. As a rookie he issued 2.70 walks per nine to port siders but in year two that mark was just 1.07.

As good as he is, a 4.79 K/BB ratio is elite and unlikely to be repeated. Only 13 men hit that level last season and how many have done it the last two seasons? Try just two: Chris Sale and David Price.

Nearly the same in the GB/FB category, but some other movement we will have to explore.

Fact is that Ryu was hit harder in year two. That's not a shock, and his overall pitching line can explain that variation from year one to year two. At the same time, an increase of 3.6 points in a line drive rate is a significant increase. Still, I'll go with his two year mark of 20.5 percent and blame year to year fluctuation and feel comfortable with that. As for the three points loss in the ground ball rate I'm obviously not a fan, but his 47.4 percent mark from '14 is still impressive. I also like the fact that the guy doesn't give up fly balls with marks of 30.5 and 30.1 percent in his two seasons.

The BABIP is well within the "normal" range and leaves him with a two year mark of .306. The 78.2 percent left on base percentage mark in '13 is elite and extremely difficult to repeat in back-to-back seasons unless your name is Clayton Kershaw. Therefore the regression that we witnessed in 2014 was expected. His two year average is still an impressive 75.3 percent (the league average is usually around 70-71 percent).

Oddly, his performance has actually been slightly better on the road since Dodgers Stadium is a pretty solid place to pitch.

There is no debate, obviously, about Ryu's spot in the Dodgers rotation. The term "lock" is completely overplayed but perfectly applicable here. So what am I doing even wasting words here? Let's look at Ryu's durability factor.

In two seasons in the bigs he's made 30 and 26 starts lasting 192 and 152 innings. That's good for a two season average of 28 starts and 172 innings. Now, let's look at his Korean numbers. In seven seasons there he averaged 26 starts and 181 innings a season. Can this guy throw 200-innings? He's done it twice but he was 19 and 20 years old when it occurred. Too many innings too early? Too much of an emphasis on it from me? The fact is that the last time he hit the 200-inning mark was 2007. That's a looooong time ago. In 2013 he missed about 10 days with a foot injury caused by a batted ball. Bad luck let's call it. Last season he missed three weeks with shoulder inflammation and then more than two weeks with a strain of his hip/glute. Just pointing out that Ryu can't be considered an elite arm until he shows the ability to consistently throw more innings.

NOTE: Ryu will begin the year on the DL with shoulder woes.

Ryu's overall skills are just below the elite. Still, I have no issue at all with an arm that generates strikeouts, doesn't walk anyone and keeps the ball on the ground. He's shown improvement in a couple of areas but the fact is that his first two seasons show an extremely high degree of similarity, and that's a very good thing. My real concern is the durability situation. If he stays healthy and throws 200 innings he's likely to have one heck of a season for the Dodgers.

10 team lg: Ryu should be drafted as a third starter with little hesitation. This league is so shallow that even if he does miss time with injury far better than replacement level arms will be plentiful on the waiver-wire.

12 team lg: Ryu is an SP3 on draft day, and one that could end up finishing the year as an SP2. Who doesn't like that?

NL-only: Bid with confidence. Don't push the price to elite status, but investing fully, and with conviction, is warranted. An SP2 option.

To see where Ryu ranks amongst starting pitchers visit our RANKINGS PAGE.