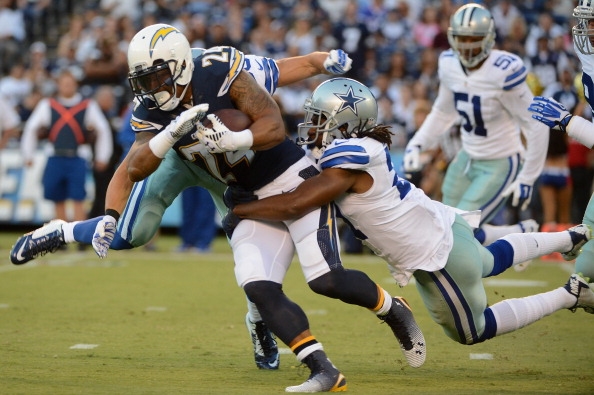 Mathews carried the ball 285 times last season. That mark was fourth in football. Fourth. His usage total on the ground was ahead of guys like Eddie Lacy (284), Adrian Peterson (279) and Jamaal Charles (259). Were you aware of that information? Betting you weren't.

What about yards per carry? I touched on how many runners Mathews was better than in 2013 in 2014 Fantasy Football ADP Report: August 11th. Bet the number is a lot better than you thought.

He wore down as the season progressed right? He's soft isn't he? Nope. Check out the numbers.

You want long runs? Mathews has you covered there too.

Mathews had seven runs of at least 20 yards last season. There were only 10 men in football who had more led by Alfred Morris with 10. He also had 27 carries of at least 10 yards. That was the 11th best mark in football (LeSean McCoy led the way with 47).

How about this doozy – if the first few data points weren't enough to rattle your cage.

In a PPR setup, do you know how many runners had more fantasy points per snap than Ryan Mathews in 2013? According to Pro Football Focus the only player ahead of Mathews was Jamaal Charles. Let that sink in. Really think about this before you summarily dismiss Mathews at the draft table this season.

Let's see if I've got this right.

Minuses – Mathews played 16 games last season. That was the first time he was able to accomplish that feat in his four year career. In his first three seasons he missed four games, two games and four games. Was last year the start of a new trend, or was it merely the stars aligning for one magical season? This is a valid factor to, well, factor in to your decision making process with Mathews. Can you trust Mathews to stay healthy? To this point the majority of the data suggests that the answer to that question is – no. Therefore, it's reasonable to allow Mathews to wallow a bit during the draft. You don't want your RB1 missing games, and you likely would have an issue if your RB2 were to miss game action. Fact is, Mathews has averaged 13.5 games a season. No way around that.

The second major issue with Mathews is workload. Make no mistake, he's leading the Chargers, health willing, in touches and carries. Just the way it is. At the same time he will lose third down snaps to Danny Woodhead. No doubt. As we saw last season at times as well, Woodhead was also used at the goaline. To be fair to Mathews he did have five rushing scores in 14 carries inside the 10 yard line. That percentage, 35.7 percent, was tied for 11th best in football so he still had work down close.

If you look at snap counts you will notice that Woodhead was on the field for 572 snaps while Mathews was only out there for 472. But let's point out the usage which is what really matters. Woodhead carried the ball 106 times and caught 76 balls while Mathews carried the ball 285 times while catching 26. Add those numbers up an Woodhead touched the balls 182 times, Mathews 311. On a per snap basis, here is how the touches played out: Woodhead was at 32 percent, Mathews 66 percent. Don't let Woodhead's snap count scare you – Mathews is way more heavily used, and will be more heavily utilized. Just the way it is.

Donald Brown was also brought into the mix. Oddly, the Chargers signed him to a 3-year, $10.5 million deal this offseason (it includes $4 million guaranteed). That contract has led many predicting a biggish workload for Brown this season. Not gonna happen. As Kevin Acee notedin a chat with the public, he would expect something in the range of 5-10 touches a week. If it's 10 touches a week then Mathews workload will be curtailed and that's an obvious concern. If it's five touches that's not much of a big deal. Don't forget either that Brown is no bastion of health. The 27 year old missed five games as a rookie, three in year two, he played 16 in 2011, dipped to 10 games in 2012, and pushed that number back up to 16 last season. All told he's appeared in a total of just 82.5 percent of his team games since he was drafted by the Colts.

Summary – Ryan Mathews is currently going off the board in the 18-22 range at the running back position in most drafts. That puts him solidly in the RB2 mix as he should be. Whether he lives up to that cost has little to do with his skills. It also has little to do with his running mates. Brown is likely to be deployed in a support role while Woodhead will function as the passing back just as he did last season. Another 275 touches seems doable for Mathews IF... and this is the real issue with Mathews, if he is able to play 16 games. As you can tell from the FantasyAlarm projections for Mathews we're having a hard time believing that he will be able to suit up in every game for the Chargers in the 2014 season.