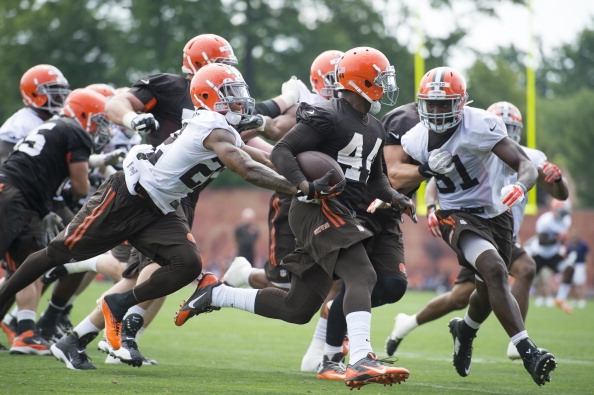 Trent Richardson was part of the Browns future last season. He was going to be their lead back for years. Well, not so much. Shipped off to the Colts, he proceeded to have one of the worst full seasons in recent memory for a player drafted in the first round of fantasy drafts. The club brought in Ben Tate, and drafted Terrance West this offseason, and now seem capable of moving the football on the ground with a potentially effective duo a year after being an embarrassing rushing attack (more on that below). We'll explore what the expectations should be with the Brown rushing attach in 2014.

What did the Browns lose from their 2013 backfield? A youngster who looks totally lost and a veteran who may be at the end of his career among others.

And those “improvements” were just by adding Tate and not accounting for Terrance West who was drafted in the third round of the NFL Entry Draft. After all, the Browns were 4th from the bottom in rushing yards last season and, remarkably, they ran for four rushing scores all year. Four. Pretty sure they could bring Jim Brown out of retirement right now and he could rush for four touchdowns.

As you will find in the Coaching Systems piece by Jeff Mans, the Browns have made changes with the men making the decisions on the sidelines. Mike Pettine is the new head coach and Kyle Shanahan has been brought in to run the offense. Shanahan's zone-blocking scheme can produce 1,000 rushers seemingly at will, but will the team be able to implement that scheme fully in year one? Will the team five one runner enough work to record 1,000 yards in 2014? Those are open ended questions.

The biggest move here was keeping C Alex Mack happy by signing him to an extension. Mack and LT Joe Thomas are a potentially dominating duo on the line. It seems likely Joel Bitonio will start at LG, and being book-ended by the two vets should aide him tremendously. The line should be solid if unspectacular.

This team doesn't seem to know what to do with their signal caller, and the locker room seems divided as well. Brian Hoyer had success last year in limited work, and though many in the locker room have his back, it cannot be objectively argued that he is an elite talent. To be fair though, not every QB that has had success in the NFL is dynamic.

Johnny Manziel's nickname is “Johnny Football.” He is one of the most polarizing figures in the game – and he's yet to play in a game that counts. A lightning rod of controversy, he certainly doesn't help himself by hanging out with folks like Justin Bieber at clubs (of call the people to hang out with, why him Johnny?). On the field he is exciting, and the fans desperately want to see him on the gridiron - immediately. His ability to run a pro-style offense at the moment is in doubt. Will he be able to keep defenses honest with his arm and not just his legs? Will he be able to sit in the pocket to let plays develop? Will he take off at the first sign of trouble? He certainly offers a skill set that can break defenses down, something that Hoyer certainly can't do, but his reckless nature might also be a detriment to the offense.

Ben Tate is an exciting football player. Standing 5'10” weighing 220 lbs, there isn't much that he cannot accomplish on the football field.

He can carry the football. Over 421 career rushes his YPC mark is 4.7. That's half a yard better than the likes of Marshawn Lynch, Eddie Lacy and Giovani Bernard last season. Tate doesn't dance, makes his decision and goes. Some would call him a downhill runner who doesn't shying away from contact.

He can catch the football, though he doesn't exactly excel in that role. In a support role last season he hauled in 34 passes.

A big problem though is that he was unable to stay healthy. We all kept thinking if Arian Foster ever goes down Tate was going to be an RB1. When Foster was injured... Tate didn't step up. Not just that, he too ended up missing ample time as he appeared in 15, 11 and 14 games the past three years with the Texans. It should also be noted that his numbers as a starter (nine games) show him to have had a worse YPC (4.3) than he did as a substitute (4.9). Was he simply taking advantage of defenses that Foster was wearing down? A further issue that should be noted is that last season he averaged 4.5 YPC over his first 88 totes of the rock but over his final six games that number dropped to 4.0 on 93 carries. Wearing down perhaps? There is some anecdotal evidence, not to mention some hard core science, that Tate would best be utilized in a timeshare situation of some kind.

Make no mistake though, Tate is a talented runner. According to Pro Football Focus's Run Rating (a cumulative total based solely on a runner with the football in his hands on a carry), Tate was the 19th best back in the NFL last year, right behind Joique Bell and just ahead of Danny Woodhead. According to their Elusive Rating ("Elusive Rating" boils down a runner's success beyond the point of being helped by his blockers”) Tate was the 11th best runner in football last season just barely ahead of Alfred Morris.

The other runner to take note of with the Browns is rookie Terrance West. Standing 5'9” and weighing 225 lbs, West is an aggressive back who has light feet, an enticing combination. West isn't afraid of contact, runs through defenders, and finishes runs off. He's obviously comfortable between the tackles, and though he's got solid quickness, his long speed is a bit lacking. West is pretty much a one cut runner. He reads the block then explodes into the gap. This guy isn't ripping off 75 yards touchdown runs after juking two guys out of their jockstrap. But he'll hit the holed and drag a defender, maybe two, for 7.5 yards. He's also capable of catching a pass out of the backfield which is a nice bonus. West can catch the ball a bit as well, even if there is no disputing that Tate has the advantage in the passing game, and he impressed his coach with work on the first day of training camp. “I was a little shocked with Terrance today,” Pettine said. “I had to double check my roster card to make sure I was looking at the right number. He did some nice things in the one-on-one period.”

A winner, West dominated in college. Some worry about his workload, 780 carries in three seasons, but the results are undeniable. West scored 84 times on the ground to tie the FCS record held by, I don't know, some fella named Adrian Peterson. Forty two, yes 42, of those scores cam in one season. As he set an NCAA FCS rushing record and led college football in 2013 with 413 carries for 2,519 yards (6.1). Numbers like that make you think video game frivolity.

Dion Lewis, Chris Ogbonnaya Isiah Crowell and Edwin Backer are also around, but it would take an injury for any of the four to gain a foothold in the Browns offense.

It's good that Tate feels that way because the Browns understand what was touched on above. The evidence suggests that Tate will be more effective splitting work out of the backfield. Most teams realize that anymore – how many have just one guy carry the mail at this point? Here's a quote from the boss, Pettine, just to that effect. “I think in the AFC North, you have to be running back by committee. You’d like to have a guy that can carry most of the load, but also be able to alternate guys . . . you’ve got to be able to get fresh legs out there,” Pettine said.

So which back do you want to lean on? If you trust the NFFC, the masses favor Bet Tate who's ADP of inside the top-70 is well ahead of West's mark which is over 130.

Both backs will be used.

Both backs figure to have success in the zone-blocking scheme the Browns will run.

Tate is the first man up, and should be looked at as a runner who will see something like ¾ of the work out of the backfield. However, as of yet unable to show long term stability/durability at the NFL level, it would be wise for all that roster Tate to consider handcuffing West to him. Even in a limited role this season it's possible that West could have Bye/Injury fill-in appeal at a minimum. For those unwilling to pay the price to draft Tate, waiting a few rounds and nabbing West as a support runner might turn out very well since there seems to be little doubt that if West was given 20 touches a week that we'd be looking at a an RB2 option in the fantasy game.