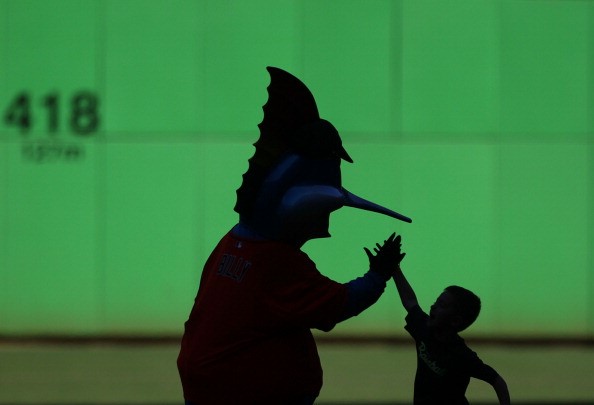 Andrew Heaney is a 6'2”, 190 lbs lefty of the Marlins. The 9th selection in the 2012 Entry Draft, Heaney is one of the best pitching prospects in the game. Seems like the kind of guy we should break down in a Player Profile given that many are looking at him as part of the next wave of young arms that can help in the fantasy game in 2014.

Let's start out by listing the three major sources we often turn to to analyze youngsters. How do the big-3 feel about Heaney's prospects?

Bet those numbers are a bit lower than you thought, right? No matter. The position you held before reading the rankings still holds – Heaney is one of the best lefty arms currently residing in the minor leagues.

He's yet to throw a big league pitch. His first will come Thursday.

What's all the excitement about with Heaney who was called up Monday? When a lefty starting pitcher can hit 97 mph on the gun people take notice. When he has easy arm motion too, well then people start to get a little giddy. His secondary offering include a solid change up and a borderline plus slider with sharp, late biting action. Let me be clear. Heaney has great stuff but he is not viewed as an elite staff ace by most. Most pundits and outlets predict a long career as a #2 starter. Either way he's going to have a significant fantasy impact if he lives up to expectations.

In 199 minor league innings, more on that low innings pitched mark can be found below, Heaney has punched out 198 batters. He's got the stuff to approach a K per inning in the big leagues. How is his control? He's walked 47 batters leading to a 2.13 BB/9 mark and 4.21 K/BB ratio. Those are both excellent numbers. Should of course be pointed out that he's only got 23 innings at Triple-A and a good deal of the work, 88.2 innings, was in Rookie or Single-A ball. Still, the numbers are impressive.

Heaney has allowed a total of seven long balls. This is impressive. He simply doesn't make a lot of mistakes up in the zone. During his minor league career he's been working with a 43 percent ground ball rate. That's smack dab on the big league average from 2013. He's also sporting a mere 5.1 HR/F ratio. Have to think that number will rise in the bigs, but clearly he's not going to go all Marco Estrada on anyone.

The point should be clear. This youngster has no innings on his arm, a fact that the Marlins admitted is an issue when the had him skip a start last week. Here's what Marty Scott, the Marlins' VP of Player Development said. "We decided a few weeks ago we were going to skip a start here and there (with Heaney). This is the first of several. We'll probably do this again in July and one more time in August." The Marlins, laughably, are saying they want to make sure he can pitch in September if they are in the playoff hunt. "If we don't let him skip a couple of starts and rest up and guard these innings, we'd have to shut him down in September, and that's something we don't want to do.” The article in the Miami Herald also stated that the Fish don't want Heaney to throw more than 160-70 innings this season. They really going to let him go from 95.1 innings last year to 165 innings this season? We'll see.

Here was the Marlins current top-5 on the bump with Jose Fernandez on the shelf as of Sunday: Nathan Eovaldi, Henderson Alvarez, Tom Koehler, Jacob Turner and Randy Wolf. The last guy, Wolf, is 37 years old and didn't throw a pitch in the bigs in 2014 as he was working his way back from Tommy John surgery. Good for him for making it back to the bigs, but come on now.  As of today it looks like the rotation will be Eovaldi, Alvarez, Koehler, Heaney and Anthony DeSlafani. Randy Wolf was DFA'd and Turner will now function as the long man out of the bullpen.

10 team lg: As I always say, it would take an extreme situation of optimum performance of a current roster and lack of injury for me to suggest anyone in a 10-team league should add him. You can, talent is there, but...

12 team lg: You can take the plunge but injuries are prevalent with pitchers, As we saw with a guy like Oscar Taveras, not all elite level prospects hit the ground running.

15 team lg: Heaney's got as much arm talent as anyone available on waivers in this format and who knows, maybe he goes Jose Fernandez on the league when he's called up. You know it ain't gonna happen, but in the words of Jim Carrey, so you're telling me there's a chance.

NL-only: You should be ashamed of yourself and your league mates if he wasn't drafted.