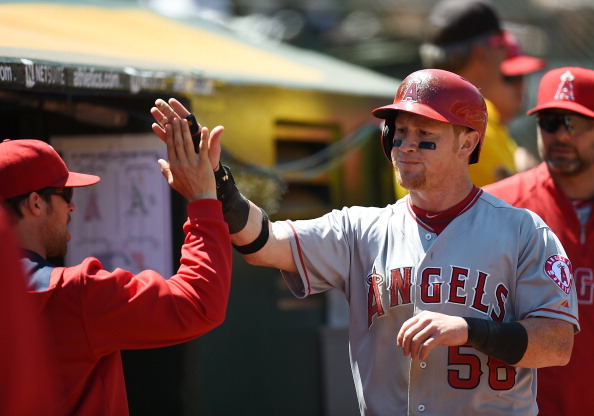 Now that the sample sizes are starting to grow, we can start to see trends, whether positive or negative. However, in this column we are only talkin’ about the guys on the rise due to recent production or increased playing time. No one his perfect, so I might swing-and-miss from time to time, but that is the beauty of fantasy sports. Let’s get to it shall we?

Kole Calhoun, OF (LAA)--The Angels have used a handful of hitter ahead of Mike Trout this season, but none have produced better than Kalhoun up to this point. Through 139 at-bats, Calhoun is slashing .273/.331/.460 with five home runs, 12 RBI and 26 runs scored. Considering how well the Angels offense has been performing of late, Calhoun has become a run-scoring machine, logging eight runs over his last 10 games, while sporting a .353 average in the month of June. As long as he can keep his strikeout rate at a respectable mark (21.5 percent K Rate) and find a way to draw more walks (12 BB), he is going to continue to cross home plate at a high enough rate to make him worth being owned in more than 20 percent of leagues, which is his current mark.

Omar Infante, 2B (KC)--The Royals have battled back to capture first place in the AL Central, with an increase in offensive production including that of Infante. Although his hitting streak came to an end following Thursday’s game, Infante had managed to hit safely in his previous nine games, resulting in twp home runs, 11 RBI and 10 runs scored, raising his batting average up to .250 on the season. The Royals second baseman has never been known for his power, but with four home runs and 34 RBI through his first 2012 at-bats, there is some added value to be had in rostering this 32-year-old. At this pace, he is going to set a new career-high in RBI, which is currently sitting at 53 from back in 2012, despite it coming at the expense on his usually reliable batting average (career .278 BA). With the lack of production from the second base position in 2014, Infante certainly could be an upgrade over a flash in the pan player off the waiver wire and is currently owned in less than 25 percent of leagues throughout the major providers.

Colby Rasmus, OF (TOR)--After a long layoff due to a hamstring injury, Rasmus has made his return to the Blue Jays lineup and should now start to gain interest from prospective owners looking for a boost in production from the outfield position. Through his first two games off the disabled list, Rasmus is is 3-for-8 with an RBI while striking out two times, which is a respectable start considering he managed to hit .130 with two RBI over a six-game rehab assignment. Although he has been a batting average drain over the course of his young career (.247 BA), his power stroke is worthy of an investment, having smacked nine homers before going down with a tight hammy. The Blue Jays lineup is full of power hitters that can get on base, so even though he is going to be hitting low in the order, there will be plenty of chances for him to put up quality production as long as his health can hold up and his attitude.

Matt Dominguez, 3B (HOU)--The Astros have really started to turn things around of late, with the emergence of both George Springer and Jon Singleton in the lineup on a daily basis. With the two top prospects getting the bulk of the attention, Dominguez has flown under the radar in 2014 despite having already hit 10 home runs with 34 RBI through 273 at-bats. He has taken full advantage of hitting behind both Singleton and Springer, having received plenty of pitches to hit, resulting in the best start to a season in his young career, on pace to surpass both his home runs (21) and RBI (77) production from last season. His increased success can be credited to an increased walk rate and deceased strikeouts, although either are eye-popping at this point. Considering the lack of production from the third base position in 2014, there are certainly worse options to deploy than Dominguez, who is owned in less than 10 percent of ESPN leagues.

Scooter Gennett, 2B (MIL)--In case you missed it, I featured Gennett in this week’s Chef’s Table column. He has been a catalyst in the Brewers lineup since being anointed the team’s leadoff hitter, and is currently hitting .404 with two home runs and 13 runs scored in the month of June. Although he isn’t going to hit for much power (55.0 AB/HR), his above-average on-base percentage and adequate speed will give him enough run scoring potential to be a worthy fantasy investment, especially for those in need of assistant in the batting average category as well.

Jake Arrieta, SP (CHC)--The Cubs may have found an answer in their pitching staff behind Jeff Samardzija, as Arrieta continues to impress in the month of June. Through four starts this month, Arrieta is 2-0 with a 0.73 ERA keeping opponents to a .198 average while sitting on a 29:5 K:BB over 24.2 innings. He has managed to show signs of high-strikeout ability from his days with the Orioles, but has never been able to put it all together like he has of late. Could be break down? Sure. The summer months in the Windy City could force his recent production fast, but until he gives reason, he is a must-own in all by the shallowest of leagues while owning a career-best 3.67 K/BB through his first 50.0 innings.

Danny Duffy, SP (KC)--Although Duffy was a bad luck loser in his last appearance on Thursday, he has managed to right the ship making him a solid add for those in deep league formats. Having allowed only five runs over his last four starts, Duffy has managed to tally 23 strikeouts to just six walks in that span (25.2 innings) while going 2-1 in the record books. The Royals southpaw has shown promise in the past, but has been made just 11 starts over the previous two seasons due to injury, but finally appears to have gotten back to form following a role in the bullpen earlier in the season. He has been a major factor in the recent resurgence that has landed the Royals atop the AL Central and could be a nice complimentary piece if he can sustain his most recent output.

Jesse Hahn, SP (SD)--Through his first three big leagues starts, Hahn has started to game some attention from those throughout the fantasy world and for good reason. After a four-run effort his first time out, the Padres youngster has allowed just one run (unearned) over his last 13.0 innings, while managed to strikeout 14 batters over that span. His seven walks through 16.2 innings is somewhat alarming, but just like any young pitcher it is going to take him some time to get acclimated to the big leagues and has dome a solid job thus far, sitting on an impressive 1.47 ground ball-to-fly ball rate. As long as he continues to keep the ball down and force enough swing-and-misses Hahn makes for an interesting add in both NL-only and deep mixed leagues now that he has earned a long stay in the Padres starting rotation.

John Danks, SP (CWS)--After starting off the season 3-5 through the first two months, Danks has certainly turned things around, going 3-0 allowing only four runs over his last three trips to the mound. Although his 62:35 K:BB rate through 88.1 innings leaves prospective owners with much to be desired, the White Sox hurler has turned back the clocks, with the main reason for his success being his ability to keep the ball in the park despite owning a rather high 0.68 ground ball-to-fly ball rate. His most recent two-run (one earned) performance has his now sitting on a 3.97 ERA and 1.31 WHIP through 15 starts, while managing to keep opposing hitters to just a .241 batting average, which is under his career-mark (.258 BAA). Although there are certainly some negatives to take with the positives, Danks has done enough recently to warrant ownership in deep league formats while being owned in less than 10 percent of leagues throughout the major prodivders.

Mark Melancon, RP (PIT)--Whenever used in the closer role Melancon has been able to get the job done, and with the recent struggles of Jason Grilli, his number could be called very soon if the Pirated decide a chance is necessary. Grilli blew his fourth save of the season on Thursday afternoon serving up a home run to Reds catcher Devin Mesoraco, but after the game manager Clint Hurdle continued to show confidence in his closer. However, with the race being tight in the NL Central, the Pirates will not be able to afford any losses due to the inabilities of the backend of their bullpen. Sitting on a 1.89 ERA and 0.78 WHIP through 33.1 innings, Melancon is certainly the speculative add to take over as the Pirates closer if Grilli continues to falter and makes for a nice pickup if sitting on the waiver wire, especially for those who have Grilli in their starting lineups.