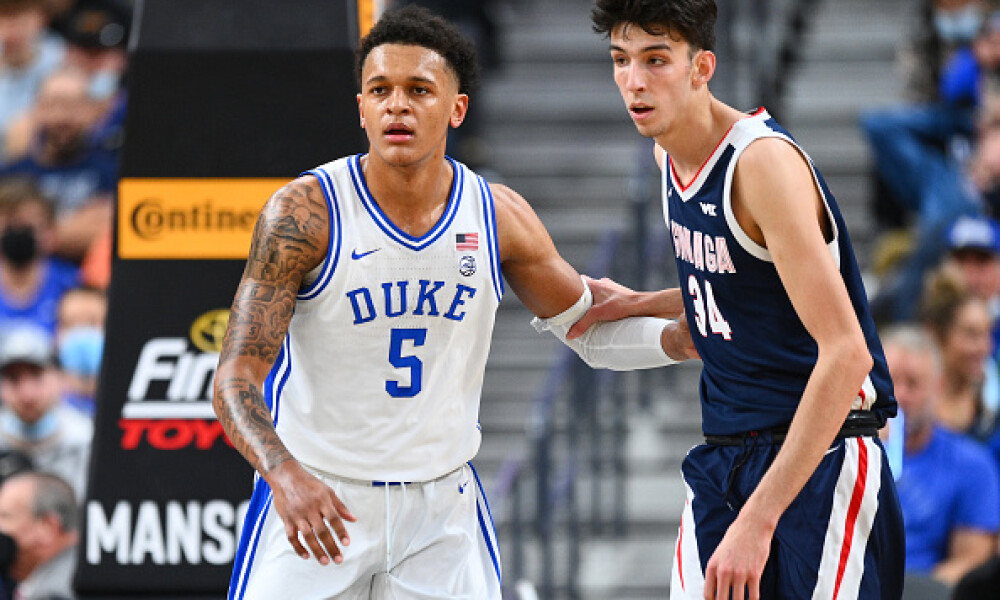 March is finally here, college basketball fans, and we have an NCAA Tournament to prepare for! Selection Sunday is less than two weeks away and we’ll be filling out brackets before you know it. It all gets underway with the First Four play-in games on March 15th and 16th before the First Round tips off on Thursday, March 17th.

Before the Tournament field is finalized, though, we need to start focusing on all the relevant teams from around the country. If you remember back to last year, we’ll have an in-depth March Madness cheat sheet available to download the Monday right after Selection Sunday. It’ll include full breakdowns of all 68 teams officially in the bracket.

For now, let’s take a deep dive into the top title contenders around college hoops. Before Selection Sunday, stay tuned for more previews on dark-horse teams, biggest upset candidates, mid-major teams to know, and more! It all starts with the best teams and players in the country, though. So let’s focus first on the best of the best.

The records, rankings, stats, odds, and projected seeds are all as of March 1st. Also, the odds to win are via the DraftKings Sportsbook at the time of publishing. We’ll be updating everything before the tournament gets underway, but keep in mind that records, seeds, or anything else can change before then.

Could this finally be the year for Gonzaga to win it all? We asked ourselves the same thing last March before watching the undefeated Zags fall in the national title game. Though they’ve suffered a few losses already, this year’s Bulldogs still have plenty of talent to beat any team in the country – and they’ve already proven they can hang with the big boys. Gonzaga is headlined by Chet Holmgren, a lanky 7-foot freshman with the versatile skill-set that’ll make him a top NBA Draft pick this year. Don’t forget about two key holdovers from last season’s squad, as Drew Timme and Andrew Nembhard are among the nation’s best at their respective positions. Overall, the Zags have the offensive firepower to score at will and deserve to be the title favorites.

Former Gonzaga assistant coach Tommy Lloyd is now the lead guy at Arizona, and he’s got his current squad looking just as good as his old one. The Wildcats boast a high-scoring, fast-paced offense that can explode for 90 points or more in any given game. With a future NBA lottery pick in Bennedict Mathurin and plenty of talent up-and-down the roster, this team will be poised to make a deep run in the bracket. It’s important to note that Arizona would’ve been safely in the Tournament last year but had to sit out due to a postseason ban.

After a down year and missing out on the NCAA Tournament in 2021, Coach Cal has his team back among college basketball’s elite. The Wildcats boast a Player of the Year candidate in center Oscar Tshiebwe, who’s averaging 16.9 points and 15.3 rebounds per game after transferring over from West Virginia. UK’s offense is one of the best in the country, led by the dynamic backcourt duo of freshman TyTy Washington and junior Sahvir Wheeler. This isn’t like past Kentucky teams that started four or five one-and-done players bound for the NBA. Instead, Cal used the transfer portal to bring in upperclassmen hungry to win it all.

The reigning national champs are again among the top squads this season and will be looking to be the first team since Florida in 2006-07 to win back-to-back titles. Despite losing its two best players from last year, Baylor still has plenty of talent to have a top 10 offense and top 20 defense in the nation. Along with some key holdovers from last season (Adam Flagler and Matthew Mayer), the Bears brought in highly-rated freshmen (Kendall Brown and Jeremy Sochan) and a top-tier transfer (James Akinjo). They might not be as good as last year’s version, but Baylor should be taken seriously once again.

Remember when Bruce Pearl’s squad made that surprise run to the Final Four in 2019? Well, this year’s Auburn team is a lot better on paper and was ranked as the AP’s No. 1 team not too long ago. The Tigers are led by stud freshman Jabari Smith, a likely top-five NBA Draft pick, and shot-blocking machine Walker Kessler, who’s found a career resurgence since transferring from North Carolina. In addition to some key transfers, Smith and Kessler headline one of the best defensive teams in the country that can also score it plenty with a fast-paced attack. The probable SEC regular-season champs will present a tough matchup against anyone.

Stop me if you’ve heard this before: Kansas is one of the best teams in the country and can easily be the last team standing. Even with point guard transfer Remy Martin sidelined with a knee injury for most of the year, Bill Self has a top-tier program yet again. Ochai Agbaji headlines the roster as one of the country’s top overall scorers, but this team is filled with experienced players who’ll be looking to avenge last season’s early exit from the bracket. The lack of depth and reliable ball-handling is the only worry, but it hasn’t mattered much against the tough Big 12 conference.

You may have heard, but this will be Coach K’s final season on the sidelines for Duke. The legendary coach is finally hanging it up, and you can bet the Blue Devils’ players and fans alike will want him to go out on top. It’s a realistic possibility with a roster loaded with NBA-caliber talent, headlined by eventual lottery picks Paolo Banchero and AJ Griffin. The skill level alone and the high-powered offense can help Duke beat anyone, like its wins over both Gonzaga and Kentucky on neutral courts back in November. This squad will probably be a popular pick to go all the way when the brackets come out, but can you blame people for going with the greatest coach of all time in his last Tournament ever?

Best of the Rest

Despite head coach Chris Beard surprisingly bolting town to take the Texas job this past offseason, Texas Tech has out-performed expectations and is still among the Big 12’s top-tier. The Red Raiders have an interesting blend of grad transfers from smaller schools and a couple of key players that stuck around after Beard left. The veteran-laden roster has a top-five defense in the country and usually rides that pesky D to comfortable wins. First-year coach Mark Adams has this team looking like Beard never left, and a title run is possible with the elite defense.

Like clockwork, Villanova is back again with one of the country’s top teams and it’ll be a dangerous draw in the bracket. After suffering a season-ending injury late last season, senior Collin Gillespie used the new NCAA eligibility rule to return for the fifth year and he’s motivated to win a second title in his collegiate career. Gillespie and Justin Moore form one of the best backcourts in all of college basketball and they can anchor ‘Nova deep into March like we’re used to seeing from Jay Wright’s squads. The biggest worry, though, is a lack of depth and proven talent outside of those two stars.

The Volunteers have flown under-the-radar all season, but February wins over both Kentucky and Auburn turned some heads. Tennessee boasts a top-five defense in the country with a roster blended uniquely with freshmen studs and veteran experience. Kennedy Chandler is one of those standout youngsters, and his versatile playmaking ability helped anchor those recent victories against top-tier SEC programs. With how good their defense is, the Vols can make a deep run in the Tournament by grinding out wins.

A year after making a miracle run from the First Four play-in games to the Final Four, the Bruins are poised to repeat that postseason success again. UCLA still has all the major pieces from last season’s squad, and that experience cannot be overstated when it comes to this win-or-go-home scenario. Johnny Juzang, Jaime Jaquez and Tyger Campbell anchor a team that has both a top-20 defense and offense in the country. A few losses during the month of February make cost UCLA in terms of seeding, but these guys proved last year how dangerous they can be if you count them out.

Illinois had a disappointing exit in last year’s Tournament as a No. 1 seed, but this season’s squad still has plenty of talent to make a deep run. Kofi Cockburn is one of the best centers in the country and he presents a physical mismatch in the paint against most teams. Trent Frazier and Andre Curbelo are also key holdovers from last season’s team and both have the upside to lead the Illini to a string of postseason wins. Maybe Illinois is better suited to fly under-the-radar as a No. 4 seed rather than play as one of the Tournament favorites.