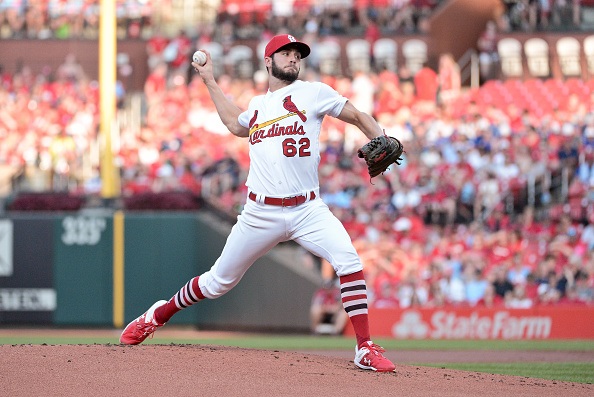 First off, I hope you had a nice All-Star break. I want to apologize for the absence of a Category Impact article last week. I recently moved and was without internet for longer than I should have been. However, we are back in business now and ready to help your fantasy teams for the second half of the season. This week, we are talking about strikeouts, and I have five pitchers below that can positive impact your fantasy team.

Daniel Ponce de Leon , SP/RP STL – It’s no longer the time to sleep on Ponce de Leon. In fact, it’s time to BUY BUYBUY! Sure, his last outing was less than ideal, as he allowed four earned runs on eight hits in 3.2 innings against the Pirates. However, in his four outings before that, he allowed just five earned runs on nine hits across 16.2 innings of work. Ponce de Leon, 27, is talented enough to stick in this rotation, and he’s on the upturn from a statistical standpoint, and in fantasy relevance. Take a look at his strikeout percentage in the rolling chart below, courtesy of Baseball Savant. 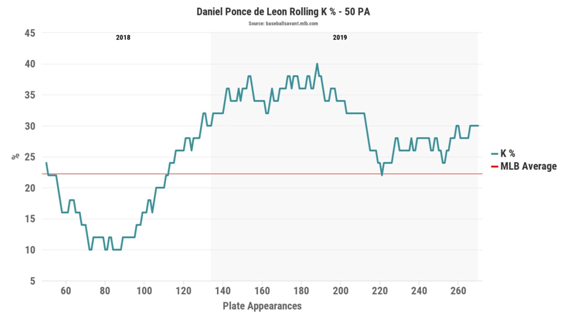 Yes, it’s not as high as it was earlier in 2019, but looking at the tail end of the graph, you can see that he’s back on the right track, as it is increasing. The right-hander’s ownership percentage is increasing, but there is still time to buy, as he’s still available in roughly 85 percent of ESPN fantasy leagues. Scoop him up before it’s too late..

Jakob Junis , SP KC – Wait, Junis has a 5.08 ERA on the season? Yes! Wait, his WHIP is nearly 1.50? It’s 1.42 to be exact. Does he have a losing record since the beginning of June? At 1-3, he sure does. However, he actually has some appeal in helping out your fantasy team’s strikeout numbers. Not only did he punch-out 10 White Sox batters in his last outing, but he’s actually recorded five or more strikeouts in nine of his last 11 starts. Of the two starts that didn’t see him accrue at least five strikeouts, he only pitched five innings in one of those. Furthermore, as the weather has gotten warmer, Junis’ strikeout percentage has increased. See for yourself, courtesy of FanGraphs.

A likely reason for this is that his slider and fastball have posted season-high whiff rates, so if Junis is able to keep this up, he could end the month with a strikeout rate above 24 percent, which would be exceptional for him, considering his career strikeout rate is 21 percent. Wins and productive outings for your ERA may be few and far between, but in terms of strikeouts, he’s been fairly consistent in recent weeks.

Michael Pineda , SP MIN – Let’s start with a chart here. His strikeout rate had declined, but, he’s on a slight uptick. 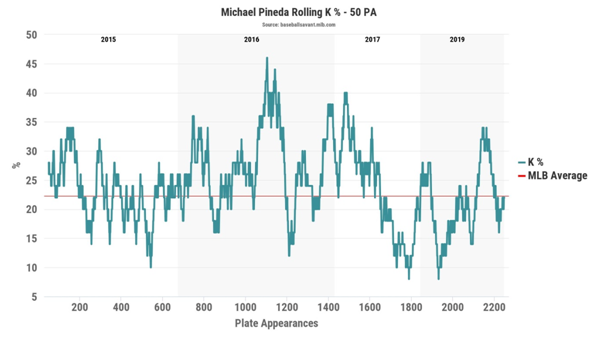 Yes, the three strikeouts in his last outing are less than ideal, but look at the outings before that. Nine punch-outs against the Rangers. Eight against the White Sox.Five against Boston. In the month of July, his 25 percent strikeout rate would be a season best, and what’s even better than that is that he’s owned in just 23 percent of ESPN fantasy baseball leagues. One word for you…. Slider. 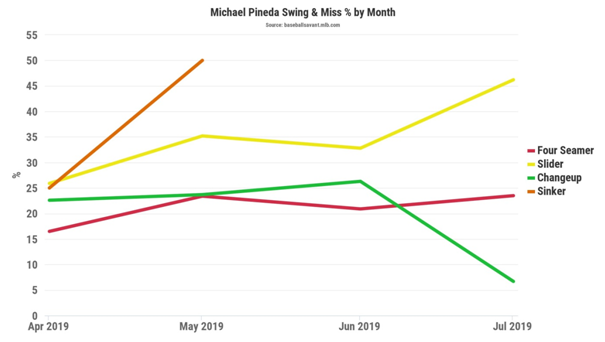 You have to love that big increase in his whiff percentage with the slider. Keep it up, Mike, keep it up.

Austin Voth , SP WAS –Voth is hardly owned in any fantasy leagues and it’s worth noting that he doesn’t have immense job security in the rotation. His strikeout totals fluctuated in recent starts, but two of which should garner your interest. Yes, the four strikeouts in six innings of work against the Orioles is less than ideal, but he did accrue six strikeouts in just 4.1 innings against the Royals, and at the end of June he struck out seven Braves in six innings of work. However, the initial reports are that he’ll get his regular turn in the rotation in the next go around, and that would give him a start at home against the Rockies. Colorado has the worst road batting average in professional baseball this season, not to mention the second-most strikeouts on the road this season. Get Voth in your lineups for this start in particular.

Nick Goody , RP CLE – Come on now! This list couldn’t entirely be comprised of starters! Not only does Goody have nine strikeouts over his last six innings of work, but he hasn’t allowed an earned run since June 23. Let me put it this way. Goody has racked up 13 strikeouts since his last earned run! I like the sound of that! Also, for the majority of 2019, his strikeout percentage has been well above league average. See for yourself below, courtesy of Baseball Savant. 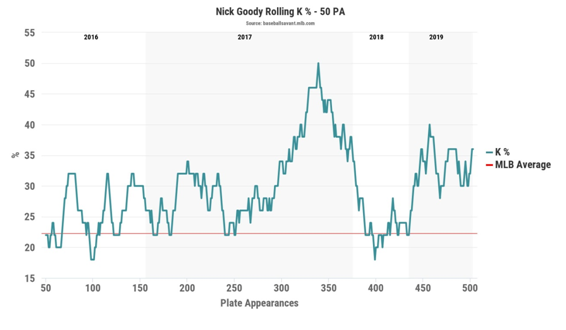 Hey, you gotta love this! While he’s not really knocking down the door for saves in Cleveland, he can do enough in terms of strikeouts to positively impact your fantasy team.