For Many Roto-Owners, Time to Build for the Future is Now 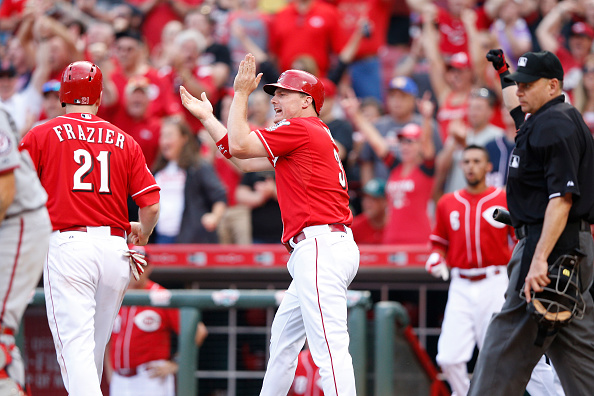 Author’s Note:  A special thanks goes out to the Baron of the Bottom of the Page who has stepped up and leaped to the top of the page to provide the analysis this week.  I take no credit for your hard work Schultz – you are “da man”!  [nb:  I hope I am not getting Wally Pipp-ed!]

And now, without further delay, the week that was by David “Carlton the Doorman of Fantasy Sports” Schultz:

June and July marks the unofficial trading season for every roto-league around the country . . . and likely the world.   For the next two months, every player proposed in a keeper league trade will be viewed as either (i) a player that can help me in 2015 or (ii) a player that can help me in 2016. Due to low expectations for certain players coming into this season, there are some quite productive major leaguers that may be confused for good keepers but are simply the baseball version of the iron pyrite -- the fool's gold.

For those playing for 2016, keep your eyes open for the following:

Todd Frazier: What you will be told: Frazier is a burgeoning talent maturing into his true skills, a true superstud in the making and you sir, can get in on the ground floor of this wonderful bargain before the world catches on. What you should remember: Frazier isn't a .300, 40+ HR, 100 RBI talent - a nice supporting piece that presently overproducing at a remarkably pleasant rate but not the player to overpay for thinking that he's the key to your 2016 title run.

A.J. Burnett:  What you will be told: his return to Pittsburgh has rejuvenated his career. Instead of playing for the bottom-dwelling Phillies, he's right back in the post-season hunt. What you should remember: Burnett nearly retired after last season and may very well do so again after this season. Plus, Burnett's WHIP shows you why he yo-yos between good and bad seasons.

Alex Rodriguez:  What you will be told: as he settles into the DH role (with 3B eligibility), A-Rod will surely continue to hit like he fears no drug test. What you should remember: A-Rod turns 40 this summer, has surgically repaired hips and hasn't played a full season since 2007.

Josh Hamilton: What you will be told: he's always succeeded in Texas, the park is made for him and his return to Arlington will result in his return to an MVP-quality talent. What you should remember: too many injuries, one too many off-season relapses and the Angels are essentially paying the Rangers to take care of him.

Masahiro Tanaka:  What you will be told: ignore this Sunday's start against the Tigers, he's been averaging 7 innings , 6 strikeouts and a couple earned runs since his June return and looks poised to pick up where he left off in 2014. What you should remember: Tanaka's 2014 season ended due to a partial tear of the ulnar collateral ligament. Unless there's something different about his physiology and the tear healed itself, he's a Tommy John candidate waiting to happen.

Schutltz version of quick digression: Do they play rotisserie baseball in Japan? If so, do they use American or Japanese players? What if they mixed the two - wouldn't that be cool? Instead of having a self-imposed rule against American League pitchers, you can craft your team around American League hitters and Nippon Professional Baseball pitching? Imagine not having to bid high on Tanaka because you already owned him in a truly mixed keeper league. Somebody please tell me this type of league exists somewhere.

Luis Valbuena: What you will be told: he has 17 home runs and it's not even the All-Star break, this is a heretofore undiscovered power treasure finally getting a chance to shine in the Astros' newly potent lineup. What you should remember: as mentioned last week in Schultz Says - this Is Luis Valbuena, be real.

Yunel Escobar: What you will be told: remember when Escobar was a highly touted prospect with the Braves and averaged .300 with double digit home runs and 50+ RBIs? He just needed a return to the National League to regain his roto-dominant stroke. What you should remember: Escobar's prospect days were last decade. Since then he's been just better than a .260 hitter with diminishing power. He may hold the line for the rest of 2015 but it would be silly to think his success carries through the winter.

Steven Vogt:  What you will be told: 30 home runs, 100 RBIs and catcher eligibility for someone that doesn't catch. What you should remember: Vogt has hit as many home runs in the first 2 1/2 months of this season as he hit in his entire two year career. At age 30, he didn't miraculously find his talent and, in some leagues, his catcher eligibility in 2016 isn't guaranteed.

Ubaldo Jimenez:  What you will be told: remember when Ubaldo almost single-handedly pitched the Indians into the 2013 Wild Card Game? Well, he's once again striking out a batter an inning with a respectable ERA and WHIP. Can you say resurgence!! What you should remember: even Indians fans have trouble remembering how great Ubaldo pitched in the second half of 2013 cause he fled for a bigger contract and went back to pitching like the Ubaldo that made everyone regret losing Drew Pomeranz and Alex White.

In case he takes time out from his busy schedule to read The Week That Was, let me wish Father Schultz a Happy Father's Day.