Week That Was: Yes, he McCann 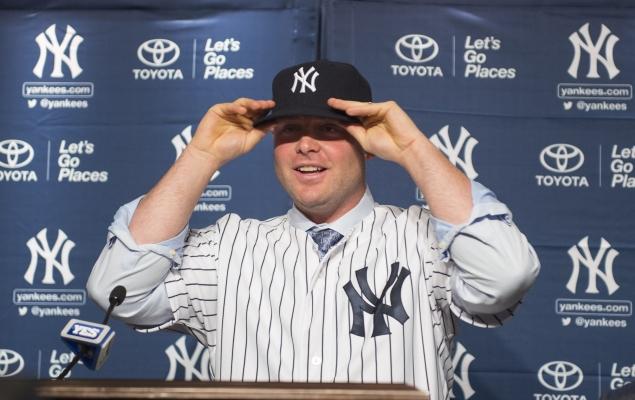 The Week That Was: “Yes he McCann!”

The buy low opportunity for Brian McCann highlights this week’s Week That Was:

Brian McCann:  Brian McCann had the big hit Friday night, a three run double to help the Yankees beat the Royals. McCann is living proof of a critical “Colton and the Wolfman” Rule of Engagement – never pay full value for a player in the first year of a big contract on a new team.  Why? Because players tend to start slow with their new teams.  Invariably such players press to show they are worth the money.  Moreover, players joining new teams are still human and thus must adjust to a new home, new city, new surroundings, etc. – all potential distractions from 100% laser focus on baseball.  Thus, it is not surprising that McCann is only hitting .231 with seven homers.  However, with the adjustment period in the rear view mirror and an upcoming summer of aiming at the short porch in Yankee Stadium (and most other AL East parks), the future looks bright.  Now is the time to buy McCann.  Call his owner in your league, carp about how he has been a disappointment, focus on the Yankees lack of offense and get yourself a bargain.  Now!

Alex Gordon:   Alex Gordon continued his hot hitting Friday night, going 2-3 with 2 runs and a swipe.  Over the last 7 games, Gordon (who I will now dub “The Commissioner” for those who get the Batman reference) is 8-22 with two dingers and four RBI.  Over the last month, The Commissioner is hitting .340 with 5 HR, 18 RBI and has walked more than he has struck out.  Given his slow start, Gordon’s value is still slightly depressed.  In this writer’s opinion, he will continue to rake and put up very strong numbers the rest of the way.  Indeed his increased walk rate, increased contact rate and reduced K rate all say my instincts are right.  Care to join me in investing in the Commissioner?

Matt Dominguez:  Matt Dominguez had a big night Friday going 3-4 with a dinger.  Overall, Dominguez is hitting .254 with nine homers and 25 RBI.  So, can he keep this up or is he a sell high candidate?   Hmmm, wait for it.  Wait for it.  Sell!  Sell now!  Why you ask?  Good question.  Primarily because he has a scary 20+ percent strikeout rate which pretty much guarantees a deflated average and fewer opportunities for runs and rbi.  In addition, his BABIP is elevated over his career norm which portends a batting average drop.  Do not conduct a fire sale but if someone is willing to pay assuming a .250+ average and 25+ HR, make the deal.

Asdrubal Cabrera:   Asdrubal Cabrera is coming alive.  Last night, he went 2-5 with a home run and 2 runs scored.  The slow start has depressed his overall stats which now stand at .255 with six homers and 21 RBI.  However, closer examination shows that over the last 30 days, he has been the hitter his owners wanted when they shelled out to get him:  .292, 5 HR, 22 Runs and 14 RBI.  Add in the facts that his walk rate is up, K rate down and that his BABIP shows there has been some bad luck, you have all the ingredients for a solid rest of the year. Former Indian Jensen Lewis appeared on Colton and the Wolfman a few weeks ago and predicted Cabrera’s resurgence.  He was right on.  The buy low window is shutting . . . . Fast!

Lance Lynn:  Lance Lynn had another mediocre outing Friday.  On the plus side, he gave up just two runs while striking out six in five innings against the offensive juggernaut that is the Jays.  On the negative side is the four walks he allowed – walks that come back to haunt you against good teams and of course drive the ever important WHIP northward.  Thus far this year, Lynn has a respectable 3.49 ERA but an ugly 1.41 WHIP.  The question is whether this is who Lynn is or is there upside in them there hills?  My answer:  there is upside.  The velocity is steady and he is getting more grounders.  The Cardinals will win a lot of games this summer and so will Lynn.  Hold.

Tanner Roark:  Tanner Roark was just great Friday, shutting out the Friars over eight innings while mowing down 11.  The Nats do not score for him but that is not his fault.  Indeed he has only one win in his last four starts despite giving up a total of 5 earned runs in total over those four starts.  The good news is that it creates a buying opportunity for the astute observer and of course, for the Fantasy Alarm reader.  If the lack of consistent wins scares people away, pounce.  Who wouldn’t take a 2.91 ERA and 1.05 WHIP?

Henderson Alvarez:   Last week, we wrote:  “It looks like the Marlins and Henderson Alvarez have survived the elbow scare as reports are that the team expects Alvarez to start Tuesday against the f/k/a Devil Rays.  If you own Alvarez, you too are breathing a big sigh of relief.  Thus far, Alvarez has been pretty good, posting an ERA below 3.00.  But even better than that, the velocity is up, the K rate is up, the BB rate is down, and the BABIP is a bit inflated.  Bottom line – Alvarez is not striking out as many as you would like a fireballer to K but at only 24 and pitching in that big park in the NL East, there is a big profit opportunity if you buy now.  What about the elbow issue you ask.  Good question.  I just cannot see the Marlins running Alvarez out there Tuesday if there is any risk – especially not after losing Jose Fernandez to TJS a few weeks ago.”  I hope you listened.  On Tuesday, Alvarez spun a complete game shutout striking out 5 and walking none in the process.  Listening now?

And last and but not least, this from the Baron of the Bottom of the Page.  Schultz says:  “With last week's call up of Oscar Taveras in St. Louis, the recent emergence of George Springer in Houston and the daily rumors of a Gregory Polanco promotion in Pittsbugh, roto-owners everywhere are salivating over the prospect of a prospect to bolster their roto-lineup. While not a recent phenomenon, the manner in which Mike Trout significantly altered the standings of practically every roto-league in existence in 2012 has caused roto-owners to put an unwarranted amount of faith into a proverbial roto-savior arriving from the minor leagues to carry them to the promised land of a roto-title. For those that play in leagues with free agent budgets, going all-in (or practically all-in) is a dangerous proposition. Trout's 2012 season - walking in mid-season as the best roto-asset in the game - will likely go down as a roto-anomaly, never to occur again. Unlike Schultz' use of the roto prefix or referring to himself in the third person. That, my friends, will remain omnipresent.

In all the hype over youngsters, the most dependable trend this season has been the oldsters regaining some faded glory and doing what they do best. Victor Martinez missed the entire 2012 season with a torn ACL and struggled to regain his stroke in 2013. However, anyone that paid attention to the 35-year-old in the second half of the season noticed that he hadn't lost his swing, it was just slow in returning. This season, hitting behind Miguel Cabrera, V-Mart is one of the deadliest hitters in baseball, clubbing 14 HRs, driving in 36 while hitting .332, He's even stolen a couple bases. Due to his knee issues, it's unlikely that Martinez regains catcher eligibility in any format (which, if he does, he becomes a roto-MONSTER). Even at the utility spot or at first base, he should continue producing at this pace.

Another 35-year-old is enjoying a renaissance north of the border in Canada. Always dependable but never outstanding, Mark Buerhle has spent the first months of 2014 posing as the best pitcher in the American League. In light of his 2.05 ERA, 1.19 WHIP and 10 wins, it would be nitpicking to carp on his 48 strikeouts. The veteran lefty is surely benefitting from the Blue Jays success as well as contributing to their AL East dominance. However, be wary. As Buehrle's present ERA is almost 2 runs below that of his 13 prior years combined, the levee may break soon. He won't fall apart but he may fall retreat from his present roto-stud status.”

Response:  Wow, I agree with a lot of what Schultz says (and I hate that!).  Seriously, yes, hoping Polanco becomes Trout THIS year is just that hope.  It will not be reality.  Yes, VMART has been absolutely awesome.  However, with 2 games behind the plate already and Avila suffering from a slight concussion, a few more innings could come VMART’s way.  Keep the faith.  As to Buerhle, I agree, it is time to sell high.  And, while he has been good, there is no way anyone can say he has been better than Masahiro Tanaka.  Yes, you can call me a homer, but 9 wins, 90+ K a 2.02 ERA and WHIP under 1 says I am right.