Fantasy Baseball Week That Was & Will Be: Shades of Gray 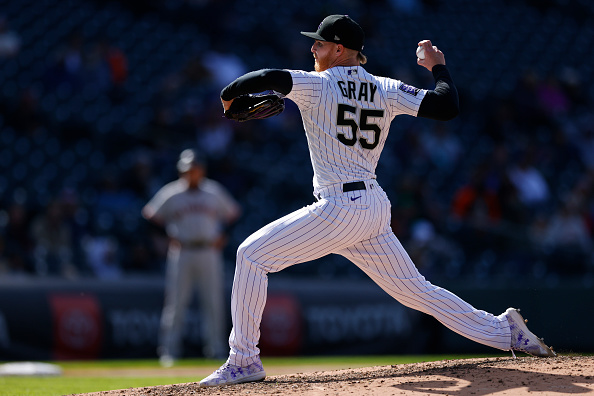 Adolis and Cedric stating their cases highlights the Week That Was and Will Be.

Adolis García:  The time to stop doubting Adolis García has long since arrived.  Sunday, the Rangers slugger went 3-4 with a dinger and 5 RBI.  On the year, Garcia has 9 dingers and 26 RBI in just 101 at-bats.  Not too shabby!  Oh, add in the fact that he has contributed two steals, is hitting .297 and is getting on base at close to .340 clip and well, you have something really good going here.  Really good.  The question is can it last?  Well, I say yes.  Why?  First, the Rangers are going nowhere and will let him ride out any slumps that come around.  Second, the hard hit and barrel rates support his success.  Third, a 70% contact rate for a slugger who hits the ball hard is perfectly playable.  Finally, he did hit 32 long balls in 2019 in AAA in under 500 at-bats.  Yes, I know it was the PCL -- but still.

For the Week That Will Be: As the above analysis intimates, in the week that will be you plug and play Garcia.That he plays four of his six games in the hitter-friendly Astros home park is just gravy.Do not attempt to sell high – unless it is very high.Enjoy the ride.

Cedric Mullins :  Cedric keeps entertaining!  Sunday, Mullins hit his 6th dinger of the year raising his slugging percentage to .530.  That is some pretty good strength for a leadoff hitter.  However, the story hardly ends with the power surge.  On the year, Cedric is hitting .313, getting on base at a .376 clip and has swiped four bags.  I guess giving up switch hitting was a good idea!  The advanced numbers support this breakout:  BB% up; K% down; barrel rate up; hard hit rate way up; contact rate up; chase rate down.  I could go on and on.  Like with Adolis and the Rangers, the Orioles are going nowhere and will be able to ride out any slumps into which Mullins may fall.  I am not saying he will hit over .300 but he will produce all year.  Hold the line.

For the Week That Will Be: Actually, for the year that will be – keep sending him up!

Sonny Gray :  Sonny Gray was dealing Wednesday, tossing seven innings of shutout ball, giving up just two hits and striking out eight.  After starting the year on the IL, Gray is rounding into form.  On the year, he has a decent 3.92 ERA, a bloated 1.35 WHIP but is striking out everyone:  31K in 20.2 IP!  Why so many Ks?  It is not increased velocity as that sits around the same as 2020, nor is it a marked increase in swinging or called strikes.  So, can we expect the K surge to continue?  No, not at that rate.  However, you can expect better ratios.  Given his solid ground ball, swinging strike and first pitch strike percentages, this is still the pitcher you grabbed in round 5 or so.

For the Week That Will Be: At Pittsburgh (Yeah!) and at Colorado (Nay!).  I still say the Yeahs have it.  Sonny is now plug and play.

Jon Gray :  Sticking with the Gray family (not really but play along), how about Jon Gray .  Wednesday, he was rolling – tossing six innings of two run ball striking out eight.  On the year, Jon has been really good:  3.12 ERA; 1.19 WHIP and almost a K per inning.  In fact, he has been better at home.  Yes, in the mile high air, Jon Gray has a .99 WHIP and an ERA just over 2.00.  So why the newfound success?  I think it is because he is keeping the ball on the ground (52% this year compared to 36% last year) and getting more swings and misses.  I am not ready to declare him plug and play like cousin Sonny (again, not really) but I am thinking about it.

For the Week That Will Be: With home starts against the Padres and the Reds, this may be the week to stream in someone.If Jon is great, you can plug and play from here on.I am just not brave enough. . . yet.

Luis Castillo :  Luis Castillo was bad again Saturday, lasting just four innings giving up four earned runs and striking out only two.  If you rostered Castillo, it probably cost you a second or at worst, a third-round pick.  Ouch.  On the year, the Reds supposed ace sports a 6.42 ERA and 1.63 WHIP.  Ewwww.  So, what gives?  Well, the velocity is down, but 96 mph should still be plenty to get the job done.  I have read people say the issue is his change but I am not so sure.  On the year, the pitch has registered a ground ball rate of almost 70 and swinging strike rate of over 15.  Yes, that is more grounders and fewer whiffs on the pitch than last year but still both solid numbers.  I think the issue is likely the fastball, a pitch on which Luis is allowing 85+% contact and registering very few swings and misses.  Given that he is still throwing 96, I think it may be pitch mix and a failure to properly set up hitters (either that or tipping pitches).  Either way, the bold out there will see that the issues are fixable and see a potential bargain.

For the Week That Will Be: All of the above said, if you can sit Castillo in Coors this week, do it.If you do not have him on your roster, you might be able to deal for him now before the Coors start, sit him in Coors and let the Castillo manager think s/he sold high.Just a thought.

If you did not get the pitchers you want, consider these middle relievers on teams with weak or unsettled closing situations or potential openings in the rotation:Yusmeiro Petit and his matching .87 ERA and WHIP; or Patrick Sandoval and his 67% ground ball rate and 14+% swinging strike rate.

If you are in the mood to gamble, how about Rowdy Tellez .Rowdy is back up, Springer is back on the IL and the Jays will score in bunches.

The moment you have been waiting for (just play along) -- Schultz says: “As The Overlord will verify, Schultz will sometimes latch onto something and not let it go. While this could very well apply to Schultz’ continuous use of the third-person despite receiving no positive feedback whatsoever, for the moment, Schultz is preoccupied with the growing disconnect between a successful player in real life and a successful player in the roto-world (R.I.P.) In leagues that permit daily roster moves, the Shohei Ohtani conundrum does not exist. However, for leagues that use weekly roster moves, rostering the league’s first nine-category superstar comes with its unique set of headaches.

After a tantalizing rookie year. Ohtani’s underwhelming sophomore season came replete with a laundry list of mitigating factors like the pandemic and a recovery from Tommy John surgery. While fascinating that he didn’t miss an entire season like every other pitcher that has undergone the procedure, his .190 7 HR, 7 SB effort didn’t quite answer any lingering questions as to whether the 26-year-old would truly live up his hype.

Anyone wagering on Ohtani this year has reaped the rewards. On the downside, if used as a pitcher, he’s put up a 2.41 ERA and struck out 30 over 18 2/3 innings (we’ll get to the 1.39 WHIP). However, if optimally used as a hitter, he’s slugged a league leading 10 HRs, driven in 26, scored 25 and stolen 6 bases, while hitting a respectable .275. So far, from a roto-perspective, Ohtani’s efforts on the mound have been too sporadic to truly commit to him as a pitcher. He’s had a start cut short due a freak collision at home on an inning ending strikeout and abruptly missed starts due to blisters and owies from being hit by a pitch. When he’s able to stay on the mound, let’s be polite and call him “effectively wild.”

Unfortunately, for those in weekly leagues that must choose between using Ohtani as a starting pitcher or in the utility spot, his real world value is getting lost in its translation to the fantasy realm. For now, the decision to use Ohtani as a hitter is relatively easy. As Ohtani has started a grand total of 16 games in his career, there’s every reason to believe that this may someday be a more difficult choice to make. When that time comes though, it may be hard to garner sympathy – oh poor thing, having to decide whether to play Ohtani as Mookie Betts or Gerrit Cole , boo freaking hoo.”

Response:  For the record, I look forward to reading third-person Schultz every week.  I also agree that if one rostered Ohtani and just installed him as a hitter in weekly leagues, you have profited handsomely.  That you have the option to pitch him when helpful is just the cherry on top as of now.