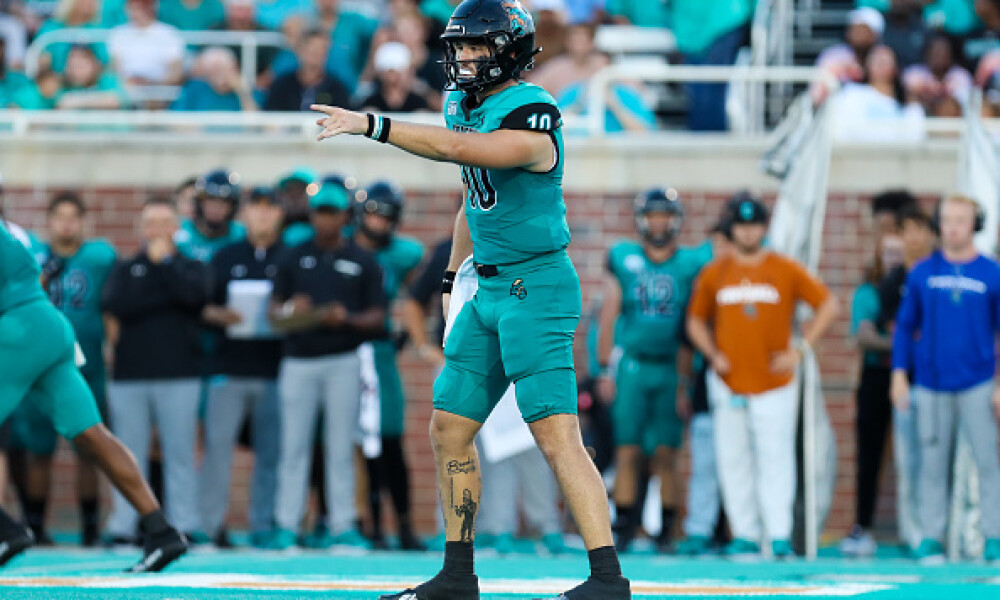 Week 4 of the 2022 College Football season kicks off on Thursday night with a three-game slate on DraftKings and two games on FanDuel for our CFB DFS lineups. You can build college football daily fantasy lineups on DraftKings and FanDuel with West Virginia/Virginia Tech and Coastal Carolina/Georgia State both kicking off at 7:30 pm ET. We also have a DraftKings-only game at 8:30 pm ET with UT-Chattanooga visiting Illinois.

We have an opening-week Sun Belt matchup between two good QBs- Grayson McCall and Darren Grainger. The Chanticleers' offense revolves around McCall, one of the best in the country. McCall is tied for the 10th in FBS with nine touchdown passes and just one interception yet is only throwing the ball 24 times a game. McCall lost his three top targets from last season, but it hasn’t seemed to bother him one bit and he is a game changer that can take over a game at any point. He has a solid floor and is the entire C-C offense. Cash Lock.

Darren Grainger is a complete misprice on DraftKings. Last year’s edition of this game ended with a 42-40 Georgia State upset, a signature win for the Panthers, and the program’s first win over a Top 25 opponent and do not be surprised if the same outcome happens again. The C-C defense has allowed 26 points to Buffalo and 27 to Gardner-Webb over the last two weeks and now gets to face a talented Darren Grainger. Georgia State has a rush-heavy offense, but quarterback Darren Grainger brings a ton of upside through the air as well.

Grainer completed 64% of his passes for 343 yards and four touchdowns in the loss to Charlotte and played well against North Carolina (16-of-24, 186 passing yards, and three touchdowns). Grainger is a dual threat (averaging 12.7 carries for 57 yards per game) but will need to throw the ball because the C-C defensive strength is stopping the run as they have held teams to less than three yards per carry (2.77) and 102.7 rushing yards per game (38th in the nation). Grainger has the highest ceiling of anyone on this slate and is a lock at QB2 in what could be an upset special.

Chase Brown is a DraftKings-only play and the third cash lock of the slate. He is averaging 165.3 yards per game and is the first Illinois player ever to run for at least 140 yards in three straight contests. He leads the nation with 496 rushing yards and 18 runs of 10 yards or longer plus is tied for second with 24 forced missed tackles (per Pro Football Focus) and his 75 carries through three games is the third most in the country. Brown can not be faded here and a sub $7K price is a slap in the face to one of the top 2 rushers in the nation- 100 yards and a TD is a given.

Georgia State is one of the top rushing teams in the country as they average 231.3 yards per game (tied for 17th). Tucker Gregg has been the workhorse thus far with 52 carries but he’s not exactly a bell cow due to Grainger’s dual-threat ability. Against Charlotte last week Gregg ran the ball 23 times and reached the century mark (100 yards) for the fourth time in his career plus added two scores. With C-C and West Virginia taking more of a committee approach Gregg is one of the safer cash plays at the position.

This is my guy right here. Donaldson is listed as a WR/TE (WR on DraftKings) but FanDuel got it right and listed Donaldson as an RB. This kid, a true freshman is going to be a star and his contribution has been one of the main reasons for WV’s improved running game. Donaldson’s college career is off to a bang as he leads the Mountaineers with 274 rushing yards and six rushing touchdowns through his first three games- his first three games in his entire life playing running back! Donaldson is also averaging 9.4 yards per run and 91.3 rushing yards per game.

Last week he surpassed the 100-yard mark on fewer than 10 carries for already the second time this season (101-yards on nine rushes) after opening his collegiate career against Pitt in the season opener with 125 yards on seven attempts. Tony Mathis Jr. may get the volume as he has 20 more carries, but Donaldson has 40 more yards and is just a better overall running back. This is a 6’2” 140-pound stud that is hard to take down plus a goal line back that always falls forward. Lock Donaldson in your FLEX as an RB that is listed as a WR on DraftKings and thank me later.

Bryce Ford-Wheaton is a monster. Just look at his film. A future NFL receiver Ford-Wheaton caught nine passes for 97 yards and two scores against PITT and 11 catches for 152 and two more touchdowns against Kansas. It’s not the greatest matchup of the slate facing Virginia Tech on the road, but Ford-Wheaton is the Alpha in the Harrell Air Raid offense and the top overall receiver of the slate.

Revenge game narrative at its best. Sam Pinckney transferred to the Chanticleers this spring from Georgia State and immediately became the new Jaivon Heiligh in this C-C offense. He is the team’s leading receiver with 15 catches for 259 yards (17.3 yards per reception) and a touchdown on the season and will be facing a Georgia State pass defense that is allowing 304.0 yards per game (126th out of 131 teams).

Jamari Thrash caught 10 passes and set a school record with 213 yards last week against Charlotte. Yet DraftKings feels that he is just a $5K player? The Charlotte game was no fluke as Thrash also played well in tough matchups against North Carolina and South Carolina. Now he faces a Coastal Carolina defense that is allowing 289.3 yards per game in the air (121st out of 131 teams in the nation) with a 9.1 YPA.