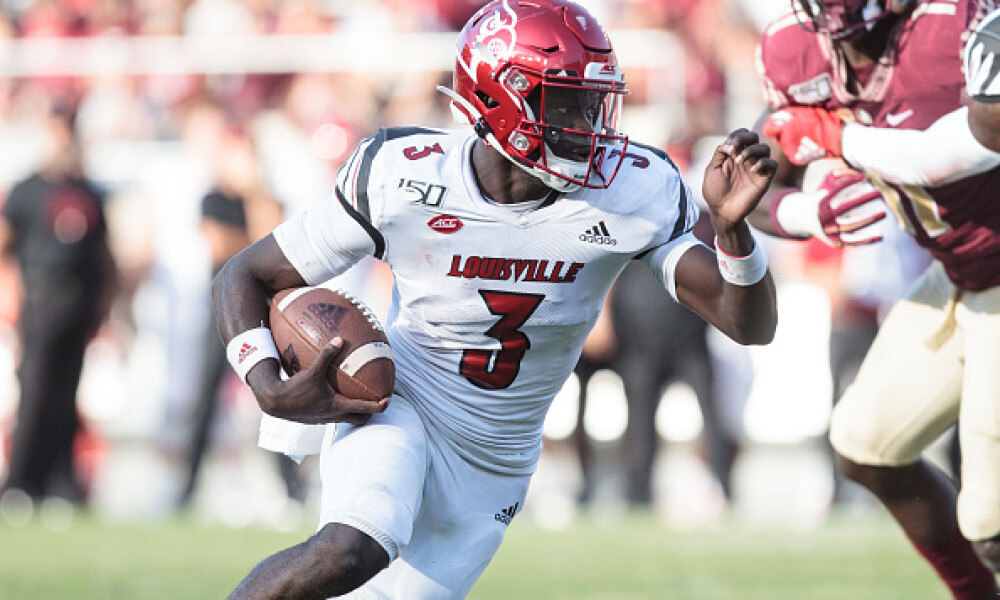 Travis will be popular in cash lineups on this short slate against a shaky Louisville defense. Dual-threat QBs have given the Cardinals trouble so far with Garrett Shrader and John Rhys Plumlee both putting up good rushing performances. Travis should continue that trend in this high-total matchup.

Like Jordan Travis, everyone will be looking at Cunningham in cash lineups and it’ll be tough to not play both as your QB and Super-Flex. In GPPs, though, Cunningham has the bigger upside than Travis and should be a priority in all formats if you’re just going with one quarterback. The Louisville dual-threat exploded for 121 rushing yards and a rush TD last week against UCF and will be plenty involved throwing and running in this high-scoring game. Cunningham had four total TDs and a big DFS performance vs. Florida State last year.

If you want to be different at QB, then Daniels is the way to go over Wyoming’s Andrew Peasley. As for Daniels, his DFS value is capped because of the triple-option Air Force offense that leans very heavily on the run game. At least Daniels does get some of that rushing volume while keeping it in the option attack. He didn’t do much last week vs. Colorado, but he ran for 107 yards with 28 DK in Week 1. Daniels had 734 rushing yards and 11 rush TDs last season and can provide a decent floor at times with that ability.

Roberts is the headliner in Air Force’s triple-option run-heavy offense. The fullback is coming off a monster performance against Colorado last week with his 174 rushing yards and three scores on 24 carries. Those stat lines were a common occurrence last year for Roberts and we’ll see it plenty this season as the workhorse and main ball-carrier for the run-focused option attack. He’s the top cash game RB on this small slate with Air Force being big favorites and the volume locked in.

Evans is actually pretty affordable on this slate on both DK and FD. The former Tennessee transfer is Louisville’s lead back now and he’s been mostly productive when given the opportunity. He averaged 6.8 ypc with 89 rush yards in Week 1 and then saw 19 carries for 75 yards last game. The Louisville run game is essentially him and Cunningham splitting the production. Though FSU limited LSU’s running backs last game, Evans can still be a fine play here.

How about yet another DK mis-pricing to kick off Week 3? For whatever reason, Ward is priced just above 5k on that site despite being Florida State’s lead back. Back in Week 0, we saw Ward go off for 127 yards and two scores. Yes, that came against Duquesne, but Louisville’s rush defense has shown plenty of holes this year. He didn’t have as much success against LSU last game, but that’s not surprising against an SEC defense. Expect Ward to be popular in DK cash, but he’s more in the GPP territory on FD.

When Roberts and Daniels aren’t carrying the ball in Air Force’s triple-option, it’s Eldridge who’s usually that third wheel. He’s had eight carries and 80+ rushing yards in both games so far this season for an impressive 10.8 ypc mark. The tailback offers the ideal change-of-pace skillset to  complement Roberts in the backfield and can gash defenses with explosive runs when they get lulled to sleep with the fullback runs. You can roster both Roberts and Eldridge in the same lineup and feel pretty good about it on this small slate.

Hudson is the clear top target for Malik Cunningham this season. He went off for eight receptions and 102 yards in the opener vs. Syracuse before having three catches for 67 yards last week. The rest of Louisville’s receiving corps has largely underwhelmed while not seeing nearly as many targets as Hudson. He’s a better play on FD due to the price differential, but it’s not like there are any other high-priced WRs you want on DK anyway.

Wilson is poorly mis-priced on DK and he should be popular on that site. After sitting out the season opener, Wilson exploded for seven catches for 102 yards and two scores against LSU last game. If this is a sign of things to come, then Wilson is the guy to roster from Florida State’s receiving corps over Mycah Pittman and Johnny Wilson. The fifth-year senior hasn’t done much over his FSU career, but he did show flashes late last season once Jordan Travis took over as the QB. It looks like that connection has carried over and Wilson may end up being Travis’ favorite target for 2022.

While Tyler Hudson is the top guy in Louisville’s receiving corps, we could easily see one of the other Cardinals’ pass-catchers catch a TD or two in this higher-scoring matchup with Florida State. Ahmari Huggins-Bruce is also an option, but Marshon Ford is a tad cheaper on both sites for likely similar production. The tight end had three catches for 38 yards last game and nearly found the end zone before being tackled short of the goal line. Ford was actually Louisville’s leading receiver last season and still has rapport with Malik Cunningham.

Similar to his teammate Ontaria Wilson, we have Johnny Wilson priced down on DK at the minimum. After catching one pass in the opener, Wilson had three catches for 60 yards last week vs. LSU in a bounce-back effort. The Arizona State transfer should be among the top targets for Jordan Travis this season and his bigger-bodied frame offers a different skillset to the mix than Ontaria or Mycah Pittman in the FSU receiving room. We’ll take the min price all day on DK, but he’s still a fine option on FD.

Frankly, there aren’t many players worth rostering from Wyoming as sizable underdogs in a low-total game. It’s only a two-game slate, though, so you can take chances with one or two Cowboys. Wyatt Wieland and Joshua Cobbs are both options in the receiving core, but Parker Christensen is cheaper than both and likely returns the same DFS production. The tight end caught four passes for 45 yards two weeks ago and then 5-for-31 last week. His reception floor appears safe and he may see enough targets underneath with Wyoming trailing.