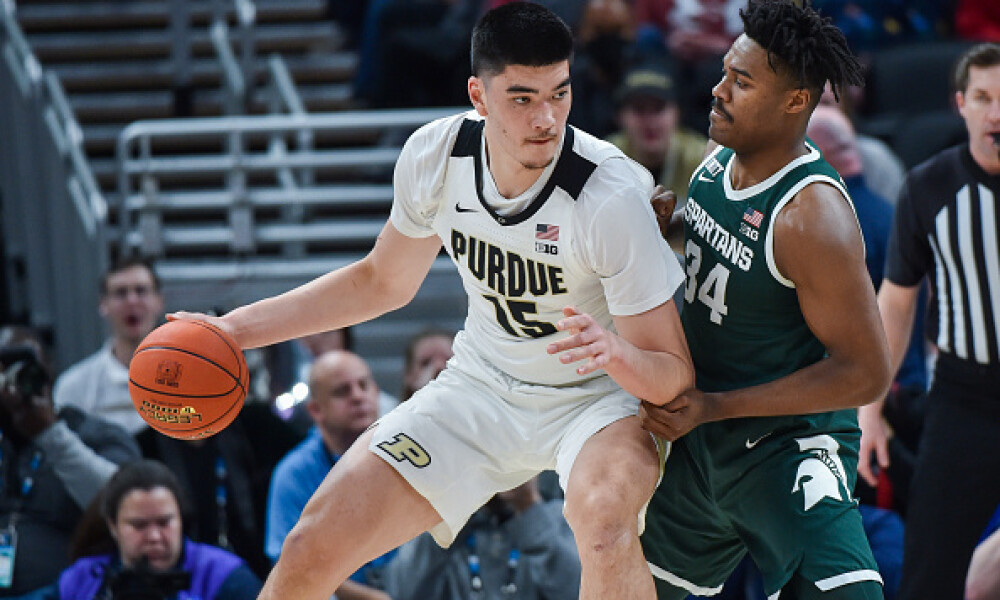 The big college basketball weekend continues and we have CBB DFS lineup building at Fantasy Alarm! We have a big Sunday main slate of games and there are plenty of tight matchups and top-tier players for our CBB daily fantasy picks. You can build CBB DFS lineups today on DraftKings for the 9-game main slate tipping off at 12pm ET with matchups from all of the top conferences. If you're looking to play college basketball DFS this season, get full access to our CBB DFS Playbooks and Core Plays with a Fantasy Alarm All-Pro Subscription. Check out all the CBB DFS top picks, lineup strategies, teams to target, and value plays to lock in for today's college basketball action. If you have any questions about CBB daily fantasy lineup strategy, ask away in the Fantasy Alarm Discord chat. Now, let's jump into the CBB DFS top plays and lineup picks for Sunday, January 22nd.

Davis is coming off an Oscar Robertson National Player of the Week award- the first player in Memphis program history to get the USBWA weekly national award, as well as the first honoree in the American Athletic Conference history (AAC). In his last three games, he scored a career-high 42 points on the road against UCF (5th best in program history) and then back-to-back 20-point games against Temple and Wichita State. As a 30/30 guy (rare 30+% in usage and shot rates), Davis is also the leading scorer and assist man in the AAC. This is a huge reason why Memphis only has five losses and all against teams inside of KenPom’s top 85. Today he will get a pace-up game at Cincinnati where Vegas pegs it as the highest-scoring contest on the slate (151.5- 13 points higher than any other game).

Phelps appears to be healthy once again and when he is 100% there aren't many players as good offensively. His rates are some of the best in the entire nation- eighth in usage (32.1%) and fifth in shot rate (35.2%) to go along with solid 19.3 assist and 4.0% steal rates. He is also one of the league's most-improved players ranking fourth in the AAC in scoring (17.2 ppg) -- up from 3.8 last year -- and is third in steals (2.2). Phelps is the SMU offense but has struggled with a back ailment since he left early in the Tulsa game on January 1st. He missed a couple of games after that and was just mediocre in 28 minutes against Cincinnati but was back to his old self at Tulsa on Wednesday playing 38 minutes and putting up 36 DKFP. I would say Phelps is feeling pretty good and if that is true- $7.5K is a bargain for this offensive star.

Cooper has been an elite playmaker this season. He's 18th in the country in assist rate at over 35%. He's averaging 6 assists a game and the Golden Gophers' offense relies on him to create most of their offense. In the first match-up between Minnesota and Michigan, Cooper was able to create plenty of looks for his teammates, notching 8 assists while only turning the ball over twice. He was actively getting into the paint and finding shooters on the perimeter. But Minnesota had just 6 assists between the rest of the team. He plays nearly every minute of the game and with a 27.15 DKFP over his last five games Cooper is a top point per dollar play at the guard position.

Johnathan, a top-100 recruit in the Class of 2021 is the youngest of the Lawson brothers to play for the Tigers after Dedric, K.J., and Chandler. He has seen a recent rise in his minutes (25 and 30 over his last two games after averaging around 10 before that) and production as of late (13 and 14 DKFP in those same last two games). He is also a threat from beyond the arc where he has made 13/29 (44.8%) 3-pointers on the year. Value is severely lacking on this slate and if you think Lawson will put in another 20+ minutes then he will be just fine for a main cash lineup.

Bigs against Maryland is a thing. Hunter Dickinson (19 pts/10 rebs and 32 pts/12 rebs) and Cliff Omoruyi (4 pts/13 rebs) have dominated them over the last couple of weeks. The undersized Terps have been without backup center  Patrick Emilien and now will have to deal with 7-foot-5 monster Edey, a top candidate for national player of the year honors and the most dominating player in the nation. Edey leads the Big Ten in points per game (21.3), rebounds (13.0) and field goal percentage (61.6). He's also second in the conference with 2.3 blocks per game and 13th in free throw percentage (74.8). It will be super tough getting these high-priced stars in your lineup today with the lack of value on the slate but Edey is still the top overall play of the day.

Lakhin just posted the most single-game blocks by a UC player in over 15 years (eight) when he totally dominated SMU last weekend. In that game, he was all over the floor defensively and also ended with 10 rebounds for a 35 DKFP day. Deandre Williams will be a tough matchup today for the big Russian but he is putting up over 12 points and seven boards a game and should get to at least 4X in a major pace-up game.

Williamson, the 6-foot-7 wing and former McDonald's All-American is finally showing the skill that many thought would take him to the NBA a few years ago.  He came from Louisville this summer and now plays with a chip on his shoulder as he paces the Mustangs at 7.6 rebounds per contest, while also posting 2.5 assists and 8.3 points. If you want an Edey or TJD in your main lineup then you will need to find mid-priced plays and Williamson fits nicely as a $6K player that is nationally ranked in both offensive (9.2%) and defensive (19.0%) rebounding rates.

The Oregon State freshman is progressing at a high rate of speed and has seen his role increase over the last few weeks. Bilodeau has flipped the switch and his confidence continues to grow as he is now playing nearly 30 minutes a game as a starter. If he can stay out of foul trouble Bilodeau is capable of a 30 DKFP game like he did against the tough Arizona frontcourt where he put up 18 points and six boards (30 DKFP).