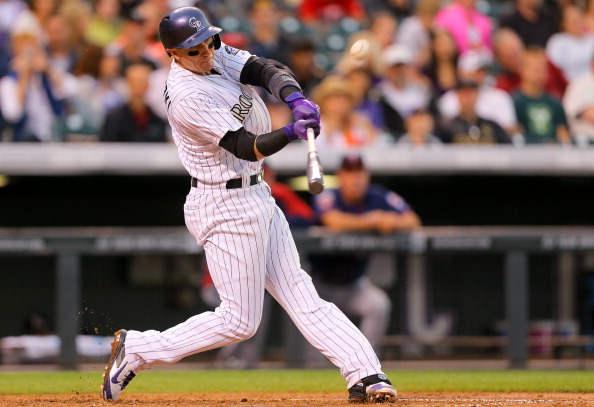 If you’re still showing up on these pages, it means your big day has not yet arrived and you’re looking for tidbits of information that will help you refine your draft strategy and turn you into an unstoppable force in your war room. You’ve probably taken part in a number of mock drafts and tested your methods against a variety of opponents from a variety of positions in the draft room. You’ve got your rankings and tiers set, you know exactly how you want to construct your offense, which hurlers you think will form the strongest rotation and you’ve built and rebuilt your team at least a dozen times. You’ve never felt so prepared heading into a draft as you do right now.

We tell you all the time that one of the most important reason for doing mocks is to learn from testing out a variety of draft strategies. But all too often the ego takes charge and we end up falling into a number of patterns we’ve developed in earlier drafts. We are innately creatures of habit. We trust what we know. We stick with what works for us. We like the players we like and we always seem to latch on to some method that seemed to really work for us in one particular draft. No matter how differently you think you’re drafting, you’ve got certain patterns that can be difficult to let go of unless letting go of them is your No. 1 priority.

Don’t worry. It happens to all of us.

But thanks to the Mock Draft Army and the ridiculous number of mocks I’ve done over the last couple of months, I have learned to recognize my patterns. I know that when I try a pitcher-heavy strategy, I become more susceptible to offensive player runs. If I lean towards offense early, I can’t help but grab a couple of high-end closers before I even grab my first starter. I also know that once I mentally latch onto a player I really want, that desire to own him elevates his potential value in my head and I end up reaching for him out of fear that too many other people feel the same way.

So in the spirit of practicing what I preach, I used a pair of recent mocks to take everything that I know and everything that I do and chuck it all. I took two completely outlandish strategies and committed to them in full. It was time to leave my comfort zone, put that ego aside and see just how much more I had to learn.

Here’s what went down.

Strategy: Draft no one I have drafted before

People always ask me, with the number of leagues that I do each year, if I always take the same guys or if I mix it up. Well, there’s always some sort of mixing it up because no two drafts are ever alike, but for the most part, I like to take the same guys in every league. Maybe it’s a bit of arrogance, but, if I like a player and think he will help me win, why wouldn’t I take him in every draft if I could? So for this draft, my intent was to go against my grain with each and every pick. Players were taken at appropriate spots, but none of them were players I have taken before, coveted or have any intention of pursuing in future drafts.

Not too bad at all, and truth be told, when this draft was run through the Fantasy Pros analyzer, my newly assembled squad was projected as the top team. My offense was rated as the third best and my pitching ranked second. But that’s on paper. In a vacuum, if you will. In the real world though, can Troy Tulowitzki really be counted on to play a full season? Do these projections assume that Nelson Cruz will repeat his power totals despite moving to a pitcher-friendly park? Will Josh Harrison and Michael Brantley duplicate their production? What’s up with Adam Wainwright’s abdomen and what the heck is going on with the back-end of my rotation and that dubious choice of a third closer?

There are a number of reasons I don’t take a lot of these players. For one thing, I tend to avoid players coming off career years, especially if I have doubts about their ability to sustain the production. Not only do I worry about a decline in numbers, but their price tags tend to be too high. I was shocked to see Brantley fall to the third round given his 29.0 ADP in the Mock Draft Army, but I had to make the play even though I still think the third round is too high for him. Cruz, Harrison and Keuchel all fit the bill here as well.

Another main reason for me is the obvious health risks of a number of these players. Call me conservative, but when I’m drafting a team, I avoid any player who needs the phrase “if healthy” when discussing his projections. Sure, anyone can get hurt, but you know just as well as I do that there are certain players who have that stigma and rightfully so. Hello Tulo. I know he’s the best-hitting shortstop in the game, but that’s when he’s healthy and frankly, I’m not using one of my first five picks on a guy who history says will sit on the DL for a fair amount of time. Wainwright, David Wright, Francisco Liriano and even Brett Gardner fit in here.

I will confess though that I deviated from my plan in my picks of Adam LaRoche and Adam Eaton. Both players I have drafted before and I have identified both as players I expect to have a big year this season. I’m not really sure I even realized that I was falling back into old habits, so maybe let that be a lesson to you to pay as strict attention to your plan and your picks during the 16th round as you do in the top five. It can be very easy to zone out and go on auto-pilot but you need to make sure you stay sharp at all times.

So while many will look at this team and give it a resounding thumbs up, I just wouldn’t feel comfortable heading into battle with these guys. I feel like I’ll be spending my FAAB dollars (or wasting my waiver priority) in a more reactive way as I scramble to replace injured bodies and chase saves. That’s just not my style.

Strategy: Take no pitchers until after I fill my entire offense

You’ve heard it a million times from us – wait on starting pitching. The position, especially in a 12-team mixed league, is so incredibly deep that the quality of starters you can pick up in the middle-to-later rounds is fantastic. No, of course you’re not landing the Kershaws or the Scherzers, but if you do the research, pay attention to how your staff is performing throughout the year and identify where you can help yourself the most, you can win a fantasy baseball championship without having an ace on your staff.

Not to mention, we all know that it’s the offense that drives the bus here. If you study the match-ups, you can stream in a group of starters who can match the production of a solid starting pitcher, but finding replacement value for high-end offensive guys is far more difficult. You’ve got a better chance of a 21st-round James Paxton matching the numbers of a fourth round Corey Kluber than you do an 18th-round Brett Lawrie matching the production of a fifth-round Evan Longoria.

So without taking a single pitcher until the 15th round, here’s how my team ended up:

Well let’s face – that offense is ridiculous. There’s power, speed, batting average, the works. That’s an offense that can dominate for an entire season.  But that’s not really what the goal was behind the experiment. Of course your offense is going to look ridiculous. What we want to know is how the pitching holds up.

When this draft was run through the Fantasy Pros analyzer again, my team was projected as the fifth-best team. My offense was rated No. 1 by a significant margin, but my pitching was ranked 11-out-of 12. I made it a point to go after strikeout heavy pitchers to at least stay in the middle of the pack in the category. Wins, as we know, are arbitrary, so it comes down to how well my boys manage their ratios. I’m not looking at anyone posting a sub-3.00 special, but if the bounces go the right way, guys like Kennedy and Paxton could come through a lot better than some except.

To be perfectly honest, I would actually consider doing something real close to this in a draft with 12 or fewer teams. If I was heading into a real draft but with a less-rigid version of this strategy in mind, I probably would have dipped into the starter pool about three or four rounds earlier and landed myself at least two of the following hurlers still left on the board to me in the 11th round: Alex Wood, Gio Gonzalez, Chris Archer or Yordano Ventura. Or perhaps I could have invested one of those picks in a better closer like a Huston Street or Steve Cishek. My last three offensive picks easily could have waited at least a round or two.

So what did I learn from these mocks? Well, for starters, I learned that old habits die hard. Try as I might, I still like who I like and those thoughts stay prevalent in my mind no matter what the original mission may be. But that may also be more of a product of these drafts re-affirming a lot of what I know and what I believe – that you can wait on starting pitching and that two quality closers will do wonders for your staff, especially if you wait on pitching. However, I will say that I do believe that you can take one elite and then bargain shop a little for your second guy.

Getting out of your comfort zone is always a nice thing to do when it comes to mock drafting. It mixes things up for you, enlightens you to different methodologies and, of course, turns you on to players whom you may not have originally considered. Your flexibility in a draft can be paramount to your success and doing mocks like these can help you see the whole experience through different eyes.