Two is the New Three: The Emergence of the Second-Year Wideout 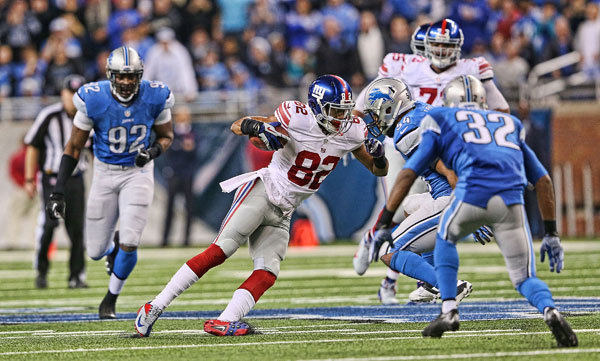 Let’s just start by admitting two basic facts of life: Fact 1, nothing stays the same; and Fact 2, no one can change Fact 1 (yes, I kind of borrowed that from M*A*S*H). Think about popular sayings these days: Orange is the new black, 50 is the new 40 and so on and so on…. So, does it really come as much of a surprise that this phenomenon has come home to roost in fantasy football as well? It used to be an accepted fact that wide receivers will have their breakout seasons in their third campaign. Well, those kids have become more precocious. What used to take three years, now takes two. Stated another way, 2nd Year is the new 3rd Year, Two is the new Three when it comes to wide receiver break outs. Don’t believe me? Consider this:

Alshon Jeffrey: At the 2013 draft table, a fantasy football GM who looked at Jeffrey saw a wide receiver with plus size (6’3”, 215) who had a modest rookie campaign marked by just 24 receptions, only 367 yards and a mere 3 TDs. If that GM thought the breakout was a still a year away, they did not realize that Two is the new Three, so he or she missed out – missed out big time. Jeffrey increased his receptions by over 350% to 89, his yardage by over 1,000 (to 1429 yards) and more than doubled his TD output to 7. Oh, and he added another 100+ yards rushing. How many fantasy football owners who won last year drafted Jeffrey in the second half of the draft last year? Yes, a lot. Two is the new Three.

Josh Gordon: If Alshon Jeffrey was on a lot of title teams, I bet Josh Gordon was on even more. In his rookie year of 2012, Gordon was pretty good but hardly a fantasy superstar (50 receptions, 805yds, and 5 TD). Those who realized Two is the new Three and rostered Gordon were rewarded handsomely as Josh logged an elite 87 receptions, 1646 yards and 9 TDs despite missing the first two games of the year. Like Jeffrey, Gordon is a big kid (6’3”, 225). Like Jeffrey, Gordon broke out in year two. See a pattern emerging? For those who are skeptical, let’s continue.

Rueben Randle: Randle did not have much to show for his rookie campaign, posting a meager 19 receptions, under 300 yards (298) and just 3 TDs. Well, the big wideout in New Jersey (6’2”, 208 pounds) proved the point by exploding in year two. He more than doubled his receptions (up to 41), yardage (over 600) and TDs (up from 3-6). That is a very nice jump in production from a guy who you could have grabbed very late in your 2013 draft.

Kendall Wright: While not as big physically as his 2013 sophomore brethren, Wright proved that Two is the new Three by increasing his receptions by 30 to a total of 94 and increasing his yardage by 450 to a total of 1079. In basic PPR leagues, that means that Wright put up over 200 points without counting TDs at all. That is an average of over 12.5 points per game in just counting numbers. Who could complain?

There is no guarantee that these guys will indeed breakout but when you are at the draft table, keep this list handy. You will not win your league because in a moment of inspiration you drafted Dez Bryant or Brandon Marshall no matter how much those guys will help you. Many of the guys listed below will prove that Two is the new Three and give you the big time profit on your investment that you need to reach fantasy nirvana in 2014.

Terrance Williams: In 2013 Terrance was pretty solid – 44 receptions, 736 yards and 5 TDs. He could easily be this year’s Alshon Jeffrey. Like Jeffrey, T-Will is a big kid (6’2”, 200lbs). Like Jeffrey last year, T-Will plays opposite an established superstar (Marshall for Jeffrey, Bryant for T-Will). Like Jeffery last year, a new sheriff has arrived to call plays for T-Will and his teammates in his second year. Like Jeffery last year, T-Will plays on a team with a porous defense that will require a ton of passing and scoring just to stay in games. Just think about it. If T-Will pulls a Jeffrey and increases his receptions by 65, he will snag close to 110 balls. If, like Jeffrey, he increases his receiving yardage by over 1,000, he will register a sweet 1700 yards. Do I think T-Will will be THAT good? No. I am just illustrating the huge upside breakout potential in Two is the new Three.

Cordarrelle Patterson: Patterson was electric at times in his rookie year and finished with 45 receptions, 469 yards receiving and a total of 7 TDs. Those numbers are even more impressive when you consider that Patterson had just 11 targets and 1 rushing attempt in his first 5 games COMBINED. During my sit down with teammate Adrian Peterson on Colton & the Wolfman, Peterson told me that there simply is no ceiling for Patterson. None! The breakout for this 6’2” speedster will not await year Three.

DeAndre Hopkins: 2013 was not too shabby for the Houston rookie as he snared 52 receptions for 802 yards and 2 TDs. Let others in the league talk about the disarray in Houston with Andre Johnson possibly holding out and the true lack of a big time QB and pounce on a Two is the new Three opportunity. Yes, Ryan Fitzpatrick is no Peyton Manning. However, he is better than Case Keenum. When Keenum took over last year, he ignored Hopkins. Fitz and his Harvard education will be too smart to repeat that mistake. Plus, if you think about it, which one of these 2013 sophomore breakouts played with a Pro Bowl QB – Josh Gordon (a parade of horribles), Alshon Jeffrey (largely career backup Josh McCown), Kendall Wright (another beauty pageant)? Hopkins breakout potential for year two is real with or without a great QB.

Justin Hunter: Hunter will not get the press or love of the guys listed above but he too belongs in the Two is the new Three club. Last year Hunter had only 18 catches but still managed 354 yards and 4 TDs – stats very similar to Alshon Jeffrey rookie year. This tall receiver with leaping ability and speed has all the tools to use to breakout and join the club. Consider that Hunter had only 11 targets in the entire first half of the season and you realize why his numbers are depressed. That will not continue in 2014. He is a great compliment to possession receiver Kendall Wright, no longer has Kenny Britt around to take snaps away and will provide great value to fantasy owners who snag him late in the draft.

Aaron Dobson: Dobson, like his sophomore classmates listed above, is a big kid who had decent numbers in 2013 (37 receptions, 519 yards and 4 TDs) but his situation is much more complex. The good news is that he plays with Tom Brady who will find him if he is open. The other piece of good news fantasy-wise is that Dobson accumulated his stats despite seeing NO targets in 5 games. The bad news is that Dobson had a stress fracture in his foot that required surgery and it is unlikely that all of Amendola, Gronk and Vereen will get hurt at once again. The other bad news is that starting a Patriots skill player is just dangerous business. You just never know who will be the focus in a given week or why. That said, all the skills are there for Dobson to join the Two is the new Three club.

Things change. Keep this list of sophomores handy on draft day. Those who forget or ignore the new paradigm do so at their own peril!