Closer Report: Another One Bites the Dust 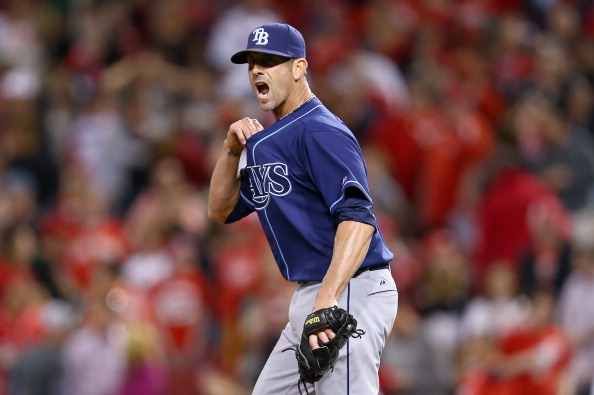 I had this great intro written up for my latest closer article, that fed off my latest Sunday night rant on Fantasy Sports Tonight, the show on SiriusXM Fantasy Sports Radio that I co-host with Ray Flowers. It’s every Sunday from 7-10pm (ET), just so I can finish the shameless plug here. Anyway, the whole thing was based on the fact that too many fantasy owners make senseless waiver wire moves because they have some sort of fantasy sickness that prevents them from just holding their FAAB bucks or waiver priority and waiting for someone truly useful to come along.

I talked about it in relation to closers as no one was losing their job and there was no need for any relievers to be picked up off of waivers, but the piece got delayed when I broke the Marshawn Lynch story and then Grant Balfour dropped a fantasy turd on his owners. Now we’re left with this God-awful committee situation in Tampa Bay and fantasy owners need to head back to the waiver wire. Or do they?

The first thing to keep in mind here is that Balfour has not be completely removed from the job. Unlike the situations in Cleveland with John Axford and Jim Johnson in Oakland, Balfour will still be in the mix for saves in Tampa Bay. He may take a backseat for the first few opportunities, but he remains very much a part of the committee, at least according to Joe Maddon who said that he is just looking for Balfour to regain his confidence. So many fantasy owners have been quick to drop Balfour who entered Monday 0-2 with a 6.46 ERA in 24 games, nine saves in 11 opportunities and 20 walks in 23.2 innings, but he might just be worth stashing as Maddon seems to be of the mindset that his closer will return to form.

In the meantime though, how will the rest of the bullpen be affected? Who will be in the hunt for saves? Who will be the guy worth grabbing right now with the hopes of a few quick, cheap saves? Let’s take a look at the candidates….

Juan Carlos Oviedo – The closer formerly named Leo Nunez stands out to me as the best possible candidate for consistent work. The 32-year old right-hander served as the closer for the Marlins from 2009 through 2011 and amassed 92 saves with a 3.86 ERA and a 8.45 K/9 over a total of 198 innings. The numbers aren’t staggering by any means, but he was fairly consistent in getting the job done. This season, he has a 2.25 ERA with a 9.00 K/9 over 20 innings and has earned the trust of Maddon in high-leverage situations. Because of his experience and mental make-up, he looks like the guy who could be used most-often should he get off to a hot start with a few opportunities.

Jake McGee – He probably has the best stuff and the strongest arm of any options in the Rays bullpen right now and it certainly shows in his 1.56 ERA and 10.48 K/9 over 28.1 innings. He has also yet to give up a home run this year (yes, fine. I just jinxed him, I know). But McGee is a lefty and Maddon, who loves to play match-ups, seems much more inclined to use him in shutdown situations in the seventh and eighth innings rather than just hand the ball off to him in a fresh ninth. There’s also the fact that in years prior, while Maddon was implementing the committee approach back then, McGee continuously faltered during his run of opportunities. True, he was younger and less experienced, but it’s still something to keep in mind. When the lefty/righty match-up is right, Maddon will likely turn to him. He could prove to be the king of the one or two-out save.

Joel Peralta – There was a time when it would have been a no-brainer to grab Peralta and to assume that he was the hand-cuff to own. But the 38-year-old right-hander is having some trouble this season and while he’s got a sweet-looking 9.64 K/9 over 28 innings, he’s also rocking a not-so-pretty 4.18 ERA with a 4.44 FIP. He seems to be having command issues as his walk rate is a little on the high side, but most of all, he’s having trouble keeping the ball in the yard. He’s already allowed five home runs and his 1.61 HR/9 is the worst it’s been since he was with the Royals back in 2008. This isn’t to say that he won’t be considered for saves work, because he definitely will. It’s just that faith in him seems to be waning a bit and a few strong appearances in a row are going to be necessary before he gets handed the ball in the ninth on a relatively consistent basis.

There may be another guy or two who may see the random save here or there – Brad Boxberger certainly comes to mind – but Oviedo, McGee and Peralta seem to be the front-runners. If you are totally struggling for saves, then sure, pick one or two of them up. But don’t expect consistency and prepare yourself for Murphy’s Law to kick you in the fantasy groin a fair number of times as the guy you start ends up with the hold while the guy on your bench gets the save. That’s the danger of relying on a committee approach, so tread lightly and only use if you absolutely, positively have to use them.

Now let's have a look at that Closer Grid, shall we?

*on DL but returning shortly