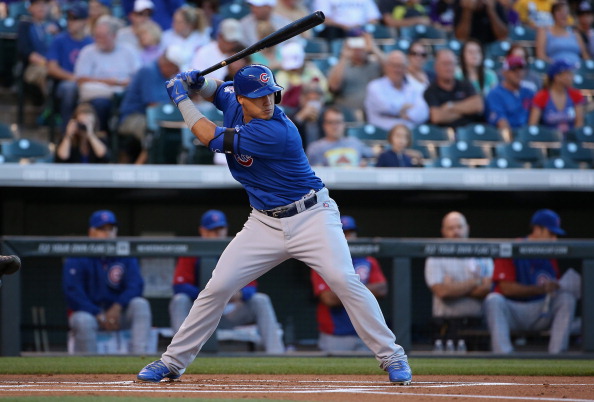 With only seven full weeks left in the regular season, moves made now until the end of the season could have a serious impact on where you end up in the standings before the playoffs begin. May be repeats from earlier in the season, the likelihood they remained owned following rough stretches in unlikely. However, a good fantasy owner knows when to hold’em and knows when to fold’em, and now is the time to start making change for the stretch run.

Javier Baez 2B, SS (CHC)--Unless you are in a league that only allows pickups once a week, there is a good chance Baez has been scooped up already, but for those looking to spend their FAAB on this up-in-coming star just keep listening. Since making his MLB debut on Tuesday, Baez has already smacked three home runs despite only four this recorded all together (4-for-14). He is now sit with 26 home runs and 85 RBI through 402 at-bats between Triple-A and the big leagues as he continues to hit for a ton of power in 2014. Although a player like Baez will likely strikeout a lot (33.5 percent K Rate in Triple-A), one thing is for sure, he isn’t going to get cheated at the plate. If he is able to keep up the pace  10-plus home runs by season’s end is not out of the question. Just know that there are going to be both ups and downs, like with most youngsters, so be patient and good things should come. He is a must-own in all but the shallowest of league formats the rest of the season.

Josh Reddick, OF (OAK)--After hitting just four home runs through 179 first half at-bats riddled with injuries, Reddick has since turned things around as he tries to salvage what is left of the 2014 season. Since returning from the All-Star break Reddick is slashing .351/.356/.667 with four home runs, 10 RBI while striking out only three times over his last 57 at-bats. With Yoenis Cespedes now in Beantown, there is a big whole left in the Athletics offense, but since the deal was made the team decided to move Brandon Moss to left field and insert Reddick into the starting lineup on a regular basis. His recent surge has increased his ownership throughout the major providers, but he is still sitting out there in just about half of all standard leagues and with power at a premium, he could be very beneficial to a struggling team down the stretch.

Chris Coghlan, 3B, OF (CHC)--I don’t like to repeat myself, but in the case of Chris Coghlan I guess I have to. It was only a few short weeks ago that I discussed how well this former Rookie of the Year has been playing this year, and still his ownership is a lot lower than it should be. Through 208 at-bats, Coghlan is slashing .298/.380/.490 with six home runs, 21 RBI, 33 runs scored and five stolen bases, including six multi-hit games over his last 10 contests.  With Emilio Bonifacio now with the Braves, Coghlan will get a chance to bat leadoff moving forward, after Arismendy Alcantara failed to capitalize on his opportunity. Although batting leadoff is going to limit his RBI potential, with a solid power hitters behind him, there is no question he will be a solid contributor in the runs scored category if nothing else while owning a high on-base percentage. He should be targeted in both NL-only and deep mixed leagues until he proves us otherwise.

Angel Pagan, OF (SF)--After almost two months on the disabled list with a back injury, the Giants activated Pagan prior to Thursday’s game, and instantly recorded a multi-hit game in his first action since June 14.  He will now slot in as the team’s leadoff hitter, which puts him ahead of the likes of Hunter Pence, Buster Posey and Pablo Sandoval, all of which are very capable to driving in a lot of runs. Although the Giants may take it easy on Pagan to ensure he doesn’t suffer any setbacks, he is going to be in the everyday lineup on practically a daily basis, even if he struggles to get going. Through 246 at-bats, Pagan is slashing .309/.357/.411 with three home runs, 19 RBI, 37 runs scored and 11 stolen bases, making him a must-start option in all but the shallowest of league formats now that he is back in the mix.  However, he is owned in less than 50 percent of leagues throughout the major providers so there is still a chance to roster his services if you are one of the lucky ones to find him on the waiver wire.

Caleb Joseph, C (BAL)--After smacking only three home runs through his first 136 at-bats, the Orioles new backstop has now homered in four consecutive games as he tries to do his best filling in for Matt Weiters. He is now hitting .220 with seven home runs and 19 RBI on the season, with seven of those RBI coming over the last week of the season. Will be he able to keep up the pace? Most likely no, but in a game full of streaks, now would me the time to ride him while he is hot if in need of help behind the dish. And unless you are in an Orioles-only league, there is a great chance you can roster him considering he is now owned in less than 10 percent of leagues throughout the major providers.

Collin McHugh, SP (HOU)--After being one of the top pitcher pickups earlier in the season, McHugh fell back to mediocrity just as fast, and eventually missed some time due to injury. However, he has found his way of late, making him a decent pickup for those looking for pitching depth. Over his last two starts, McHugh has allowed only two earned runs while owning a 13:1 K:BB rate despite failing to get into the win column, with his last victory coming back on June 3. On the year, McHugh is 4-9 with a 3.18 ERA and 1.08 WHIP through 17 starts, while owning an impressive 115:35 K:BB rate over 102.0 innings. Considering the lack of production from the backend starters throughout the league, there are far worse alternatives than McHugh, who could as least provide a team lacking strikeouts with a ray of sunlight in one category if nothing else. Outside of extremely shallow leagues, McHugh should be targeted before his next start on Tuesday against the Twins.

J.A. Happ, SP (TOR)--The Blue Jays are doing their best to stay in the hunt for the AL East title, and the recent play of Happ has been a big surprise to both the team and the fantasy world. Over his last four starts, Happ has allowed two runs or less in each trip to the mound, while owning a 25:6 K:BB rate over his last 26.1 innings, despite being the winning pitcher in only one of those contests. Whether or not his recent production will keep up is anyone’s guess, but he is only getting better as he logs more innings down the stretch, including a career-high 12 strikeout performance in Thursday’s loss to the Orioles.  Not to mention all four starts have come in hitter friendly ballparks, which in the past would have resulted in less production more times than not. For now, he remains an add in AL-only and deep league formats, but if he manages to keep up his hot streak through his next few starts, there is a chance those in shallower league formats may want to consider this southpaw for the stretch run.

Kyle Hendricks, SP (CHC)--Despite sitting under 15 games under .500 on the season, the Cubs have had their fair share of bright spots in this season, including the emergence of Kyle Hendricks. Since making his MLB debut, Hendricks is sitting 3-1 with a 2.10 ERA and 1.02 WHIP through his first five career starts, while managing a decent 21:8 K:BB rate over 34.1 innings. While he will never be a pitcher that is going to blow anyone away with his arsenal, Hendricks could be of assistance in three of the five major pitching categories while holding opponents to a .218 batting average. It is unlikely that he will be able to continue his success as this rate once he gets more innings under his belt, as low as he maintains a ground ball-to-fly ball rate around his current 1.17 pace, he should be able to keep both his ERA and WHIP at respectable enough of a level to be a fantasy asset in deep league formats.

Mike Fiers, SP (MIL)--The Brewers have announce that Fiers is going to get the start on Saturday in place of the injured Matt Garza, which will be his first of the season. Just two seasons ago, Fiers made an impact for those in deep leagues, starting 22 games for the Brewers, resulting in nine wins, 3.74 ERA and 1.26 WHIP while owning a 135:36 K:BB rate over 127.2 innings, but has made just three starts since. However, he has done a good job at the Triple-A level in 2014, sitting on a 2.55 ERA and a 129:17 K:BB rate over 102.1 innings over 17 starts. Whether or not this is a spot start or a more permanent fixture with Garza sidelined has yet to be determined, but those in NL-only leagues will want to give Fiers a strong look, considering he has had success at this level in the past.