Ivar Anderson highlights all of the top targets on the mound to stream for Week 24 of the MLB and fantasy baseball seasons. 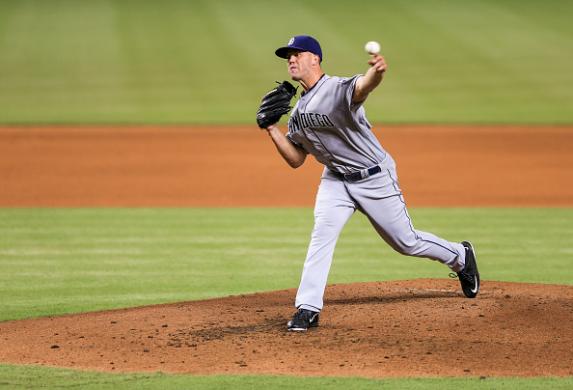 This will be the final streaming pitching article of 2016. With all the minor league call-ups, it is getting more and more difficult to find starting pitchers to recommend that are locked in during the week as far as making their scheduled starts. Plus, you may have noticed that football has started playing regular season games, and most fantasy players are now devoting their attention to the gridiron and not the diamond. You are always free to contact me with specific questions about starting pitching options, and my e-mail is list at the end of this article, as always.

Realize that these pitchers are all owned in 50% or less of leagues. and thus may be available in your league on the waiver wire. I am only going to highlight those pitchers that I believe can provide a boost to your rotation, so no bottom-of-the-barrel SPs will be brought to your attention. Also, please understand that this set of pitchers is being assembled early before the next scoring period (in most leagues, at least) commences, and weather, injury, demotions or crazy managerial decisions can interfere with our well-laid plans, so be ready to adjust if you can make daily lineup adjustments.

Cashner has a nice matchup, facing the Braves, although it would be better if this game were being played in Miami, judging by Cashner’s home/road splits. He did strike out nine Phillies in his most recent start, but do not expect those numbers against the Braves. The Marlins need to start winning again, and will rely on Cashner to make that happen.

Gee is not a pitcher I would have recommended drafting this season, but he has been doing well of late, pitching to contact and employing his superb control. He is not a great source of Ks, though, so the opponent is likely to put a lot of balls in play here, given the A’s general plate approach.

Other pitchers to consider: If you want to take a gamble, either Ariel Miranda SEA @ LAA Ricky Nolasco or Bryan Mitchell NYY vs LAD Jose De Leon could do good things. The track records are not there to accurately predict how they will fare, but both have low ownership percentages and I would be willing to go with almost any pitcher against the Angels and Nolasco if I were desperate for a start.

Cotton turned in a stellar effort in his first start this season, holding the Angels to one run on two hits over 6.1 innings. Of course, Albert Pujols, Mike Trout and Yunel Escobar were not in the lineup he faced, so take that with a grain of salt. Here, he has a tougher matchup, and Duffy is not someone to discount as a mound opponent. He did show excellent strikeout skills in the minors, though, so he should generate a fair share of swings and misses, though the Royals are not a particularly strikeout prone team.

Thompson has tossed three excellent games recently, putting up a couple of quality starts before he lasted just 5.1 innings in his last start against the Nationals. He is not a good source for Ks, though, although the Pirates do swing and miss as much as the average MLB team. His opponent has been struggling recently, and there is that in favor here, as well as his recent success on the mound.

How long Richard can continue to baffle hitters is something we must ask ourselves given his track record, but he has only given up three earned runs over his last five starts, covering 30 innings, so there is reason to believe he definitely has a hot hand right now. He has also pitched much better on the road than at home, so heading to San Francisco is a plus factor for this start. If he can continue to exhibit control and pick up a handful of Ks, he is a useful spot starter for your fantasy team.

Rodriguez is coming off two road QS, where he allowed a scant two earned runs over 14 innings pitched. He has been a better road pitcher than an option in Boston, and the Yankees as noted above are not a good team to try to rack up the Ks against, not that Rodriguez is anything more than a below-average strikeout producer. The Red Sox are a good home team, however, and while this is a divisional battle with playoff implications, I am going with the hot hand here in recommending Rodriguez.

Another Red Sox/Yankee matchup, and again I would recommend the Boston hurler. Buchholz can be frustrating with his inconsistency, but has been effective as a fill-in starter for Steven Wright, who is out of action with a shoulder issue. He has only allowed three earned runs over his last three starts, covering 19 innings. Unlike most of the streaming options set forth here, he does have strikeout potential, going 18:2 K/BB over those same three starts.

Jimenez is another pitcher I have a difficult time recommending, but he is working on a four game QS streak. He is an average strikeout pitcher, and generates his fair share of groundballs (1.64 GB/FB ratio in 2016). His control also gets him into trouble, but against the free swinging Rays, he is a useful option to trot out for this start.

Saturday is a day of wealth in terms of options to pluck off the wire. Lugo has proven to be a nice filler for the Met rotation, and is working on a three game victory streak. Facing the Twins is not a scary matchup, and while I expect some regression to take place, I would not count on that happening in this home start.

I talked about Gee above in the section covering Monday’s options, so go take a glance at that for my general impressions regarding the KC hurler. Here, he gets to face the below .500 White Sox at home, and while I am concerned  about his 1.8 HR/9 rate this season, the Sox are not exactly loaded with power.

Mitchell did not get a full recommendation in the Monday section, and here he heads to Fenway to take on the Red Sox. Not the best matchup to be certain and I would suggest that before you start him, you examine just how effective he was against the Dodgers in his first start of Week 24. If he is able to shut down the Dodgers as he did the Blue Jays in his first start of the season, then I would take a chance on him despite the venue and opponent. It will be an important game for both teams, and the pressure could be a negative factor, or perhaps it will inspire Mitchell to greater things. Of the three options on Saturday, he is the shakiest option presented.

I recommended Cashner and Cotton for Monday and Tuesday, respectively, above, so as with Gee, you can see what I said about them in general up top. Cashner has a good matchup here, even with the road start. He did shut out the Philadelphia offense on four hits in his September 7th start, so that plays in his favor here. He should also be able to rack up some Ks against the host Phillies.

Cotton heads to Texas, which is surely not the best stadium to face a first place team with serious power. I would not expect a ton of strikeouts, either, as the Rangers are a generally disciplined bunch at the plate. I have trusted young Oakland pitchers to perform well for many years now, though, and Cotton’s ability to miss bats in the PCL intrigues me. If his Tuesday start goes well, then I would consider adding him to my roster for this start, too.