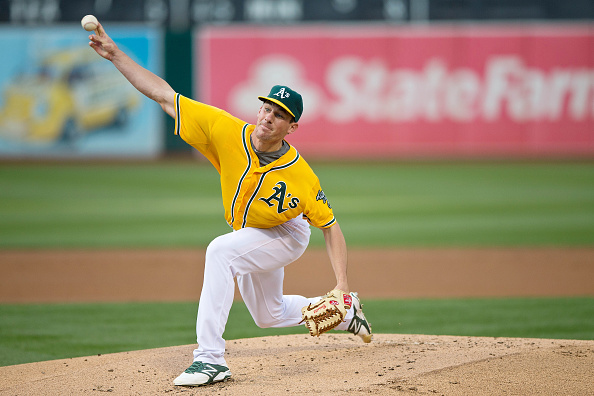 Week 18 provides slim pickings when it comes to useful streaming options, at least among those whose ownership percentage falls within the parameters this article employs in selecting

possible candidates. Those listed below do provide the best opportunity for positive results if you need to pick up a pitcher or three to get you through the first full week of play in August. Should you have questions about a particular starting pitcher you are considering for a streaming role, please send me a note; my e-mail is at the end of the post, and I always try to respond in a timely fashion. Just make sure your message line indicates that you are asking about a potential streaming pitcher decision so I can pick it out of my inbox easily.

Just to avoid any surprises, this is the last streaming pitcher article for the 2015 season. As I indicated above, though, you can always ask me about particular pitchers you may be considering in a given week, and I will reply, assuming that your message has an appropriate subject heading to help me locate it in my crowded inbox.

On a weekly basis, I am profiling those starting pitchers who are scheduled to take the mound in the upcoming scoring period. This is done to help you determine who to try to grab from your league's free agent pool and/or who you should target as a player on whom to spend your FAAB funds. Note that all the streaming options listed below are owned in less than 50% of leagues, and thus could be available on your waiver wire. Here are this week's set of potential streaming targets.

Bassitt has now thrown three consecutive quality starts, although all he has to show for his efforts is a 0-4 record. Despite putting up a .255 BABIP on the season, he can be considered unlucky, as he has pitched well enough to have collected a victory or two by now. He did rack up a season high six Ks in his last start, which is more in line with his minor league numbers. He gets to face the Orioles away from Camden Yards, which should limit their offensive production.

Just like Monday, no pitcher going today fits the specifics of this article. If he is available, Carlos Rodon CHW is worth a start, going against Tampa Bay.

To partially make up for Monday and Wednesday, I offer up two options for Thursday and Friday both. Garza has pitched much better at Miller Park than on the road this season, and while he has given up his fair share of dingers in Milwaukee, so have a ton of other pitchers as Miller Park has the distinction of being the most home run friendly stadium this season. San Diego is not a power-heavy club on the road, either. Even so, I would prefer to go with the next guy if I had my choice.

Ross would be my choice to stream on Thursday, but there is a risk that with Stephen Strasburg due to come off the DL this upcoming week, that he will be bumped from the National rotation. He is on a three game QS streak since rejoining the rotation in July, and has accrued five straight quality starts since June 13th. He has a superb 40:4 K/BB ratio in his 39 innings this season, and generates a ton of ground balls (2.11 GB/FB ratio). If he gets this start, grab him and plug him in.

I realize there is only one entry here, but I actually like both sides of the match up. Ray has been very good in terms of dominance and control, posting a useful 7.83 K/9 and 2.30 BB/9 over his 66.2 innings in 2015. He has been a better road pitcher, but in this instance, it is probably best to avoid facing the Reds at the Great American Ball Park, as it is the best hitters's park in baseball after the reigning favorite, Coors Field. He has the ability to avoid giving up the big hit, as evidenced by his 2.70 ERA, 1.13 WHIP and 0.4 HR/9 stats.

Iglesias is also a good source for Ks, with a 8.94 K/9 rate in 47.1 innings, but his control needs some work (2.85 BB/9). His BABIP and FIP (.347 and .385 respectively) indicate that he has pitched better than his numbers would indicate: 5.13 ERA, 1.39 WHIP. Even so, he is someone to stream for one thing, strikeouts, and if you go that route, you have to hope he is due for one of his quality starts, not one where he gives up four or five runs.

The fates conspire against those of us who seek out streaming options once more. Jesse Chavez OAK is going on Saturday against the Astros at home. If he is available in your league, you might just want to consider adding him to your roster on a full time basis.

I talked about Bassitt several inches above in the Tuesday discussion. Take a look up there to see what I think of the A's starter. This is a less favorable match up, as Houston is a better hitting team on the road than Baltimore, although he could easily best his season-high strikeout number when facing the free swinging Astro lineup.