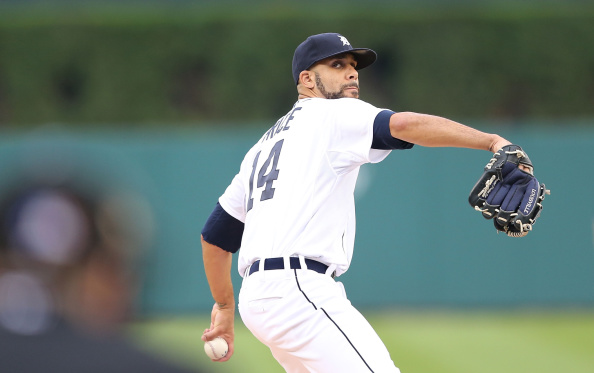 Summer officially ends on Monday, but baseball goes on. As pennant races tighten, the need for pitching grows for those

fantasy owners fighting to win their leagues. Thus, here is this week's two start pitcher analysis. Plenty of options to explore, especially in the middle tier. Just be careful if you use the pitchers at the bottom of the middle tier, as their results could jump up and bite you.

As I say every week, these pitchers are ones that I would start without hesitation, no matter who they face or whatever venue they are playing in this week. This could have been a larger selection, but the top guys in the next tier need to prove to me that they belong before I elevate their status.

The first sub-tier begins with Smyly and runs down through Elias. Smyly has been superb since moving to the Rays in the David Price trade. His problem is that the Rays are going to limit him to 150-160 innings this season and he is already at 141.1 innings. So get these last two starts in and enjoy his excellence. Don't worry that the Mariners sent Paxton down to Triple-A, he will be back on September 1st and will take the mound for his two scheduled starts. He has been extraordinarily stingy with earned runs in his past five starts, giving up two earned runs once, and not yielding an earned run over 6.2 innings in his last start against the Rangers. Ventura was scratched from his last start with back tightness, so keep an eye on his status before plugging him in. He is a good source for strikeouts, and is working on a six game QS streak. Cole has also been sent to the minors for a short time to allow the Pirates to add a bat to their bench, but he'll be back September 1. He is also on a two game QS streak since he came off the DL. Santiago has allowed only three earned runs over his last four appearances, covering 22.2 innings, and has been striking out batters at nearly a batter per inning pace, to boot. Carrasco is working on a three game QS streak, and has allowed only two earned runs over his last 24.2 innings, as well as racking up 24 Ks over that stretch, too. Finally, Elias is another young pitcher who will soon be sitting when his inning limit is reached. His problem is that he doesn't pitch deep into games, but the innings he pitches are superb. Over his past six starts, he has allowed more than one earned run only once, and in that start he held the White Sox to only two earned runs, albeit over 5.2 innings. Because his innings are being closely watched, he isn't much of a source of wins, but the peripherals are great.

Latos tops the second sub-tier which ends with Tepesch. Latos keeps going up and down, giving up one earned run, then following that game up with a three or four earned run effort. He still provides strikeouts, coming off a 10 K effort against the Cubs in his last start. If you don't mind the ERA and WHIP being a bit high, he's your guy. Hudson has gotten over a short rough patch, holding opponents to single earned runs over his past two outings, although he has only one win in those games for the effort. The eight inning start against the Rockies was especially frustrating, but as he has done all season, he is simply a steady presence for your rotation. Hamels strikeout numbers are trending downward, just as he has started to give up more earned runs in his appearances. His last three outing have been three earned run efforts, and with the lack of run support he receives, it is no wonder he has a 7-6 record. Hughes had been on a nice streak, until his last start where the Royals pinned four earned runs on him. He is a good source for Ks, and if he can go back to his ways of allowing zero or one earned run over six or seven innings, then he is well worth starting, even with his match ups against the Orioles and Angels this week. Gallardo looked as though he had rediscovered his strikeout abilities, but that isn't so of late. I am not a fan of his walk rate, but overall he has become a dependable if not exciting SP again. Greene has helped put the Yankees into the race for the wildcard in the American League, but I worry about his inconsistent results. He can be amazing, holding teams to two or less earned runs and racking up excellent strikeout numbers, or he can give up three or more runs and not miss many bats. You certainly take your chances with him, but the highs are worth the occasional misfire.Nelson's stretch of five consecutive QS has now turned into a two game two loss situation. He has immense talent, but is going through a small rough patch and I would expct him to rebound soon enough. Hellickson is not dependable at all, and thus he sits this low on the list. He can be a great provider of strikeouts and hold the opponent to limited runs, or he can get knocked out after four innings or so. I don't like to take on risk and am avoiding Hellboy for now. Miley is another inconsistent SP, frustrating his owners when he puts up a stinker like he did five starts ago, when the Royals hit him around to the tune of ten earned runs. Since then it has been three, one, zero and three earned run efforts. Too up and down to trust in my opinion. Cahill, Miley's teammate, is coming off a 3/1 inning outing where he let in six earned runs by the visiting Dodgers. He also has been on a downward trend with Ks his past three games, and has been walking too many hitters to be effective. Gausman has the potential you want to see in a young pitcher, but he is suffering some growing pains in the majors. He has gotten his control in order his past two outings, but you would like to see more strikeouts and less earned runs in your two start pitcher. Hammel was in real danger of losing his rotation spot, but he has been turning it on, with the exception of the three inning, five earned run effort in Atlanta one start before his last appearance, a seven inning, one earned run effort against the Astros. Those who have read me over the years know I adore Hammel, and while he had me worried, it looks like I can enjoy owing him again. Tepesch wraps this sub-tier up, and while I am not that high on any Ranger pitcher this year because the team is struggling big time, he has been decent, but the lack of Ks makes him less than desirable as a SP. That and the occasional blow up game, like the six earned run effort against the Royals two starts ago. You would have to be desperate to start him, especially when he faces the Royals on the road and then against the Mariners at home.

From draft day through the championship game, the 2014 Fantasy Alarm Draft Guide has you covered! Get it PLUS the

The final sub-tier opens with Kelly and wraps with Hernandez, and is comprised of pitchers that I wouldn't necessarily trust to start a game for me, let alone two in the same week. That being said, they can put up a good start, but a lot depends on the match up, and I don't like any of these guys this week. Kelly, despite giving up seven earned runs to the Astros mid-month, has been a strong starter for the Red Sox overall, since moving to the AL. More strikeouts would make him more attractive, as would better control. He could turn things around, but I will wait until he does so before I add him to my rotation. Norris has had a couple of bad outings, especially the rain shortened start where he only went two innings against the Cubs and gave up four earned runs on four hits and a walk. He was good in past because of the strikeouts he offered, but now he is just a back of the rotation SP.  Dickey is frustrating as he is as capable of twirling a gem, as he is of giving up four or five earned runs. He is a long way from his Cy Young season, and I would let him sit. Turner, like Dickey, is capable of great performances, and terrible outings, too. Given a lack of strikeout ability, he is not worth trusting as things go down to the wire in your league. Morales has two home games this upcoming week, and while he does pitch somewhat better at home than on the road, that still doesn't say much for him. He doesn't pitch deep into games and any SP with a 5.14 ERA and 1.59 WHIP should not really be trusted. Hernandez wraps up this tier, and while he is not a terrible option, he is also not someone you can expect to push you over the top in your match ups. He does pitch better at home, though, so if you wanted someone for an end of the week spot start, then using him when he faces the Diamondbacks could give decent results.

The five starting pitchers in the final tier are just not pitching well enough to trust even with a good match up. I would advise you to leave them on the wire until they can demonstrate some dependability on the hill.