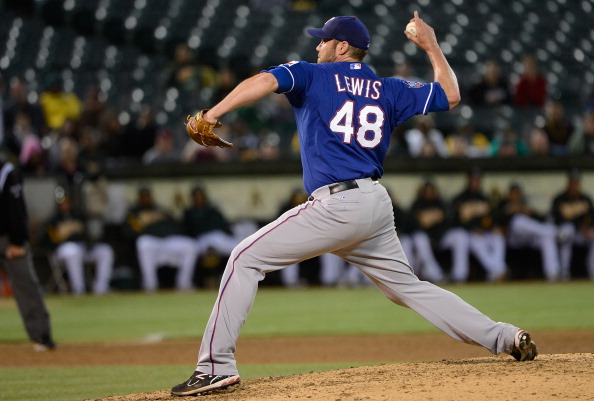 Another week, another batch of streaming options. Remember that all these starting pitchers are owned in less than 50% of leagues, making them good options to pick up for a spot start, or to replace your injured pitchers.

Alvarez has thrown three consecutive quality starts, and sandwiched in those starts was a nine inning beauty where he didn't allow a single earned run. He has a 2.73 ERA in 29.1 innings, although his 1.42 WHIP is a tad high for my taste. Beckett has pitched well also over his last three outings, although he does not have a victory to show for it. With a .91 WHIP and 2.45 ERA on the season, he is sure to start to get lucky, and now would be a fine time to add him to your roster before his ownership percentage goes up.

Danks took a loss in his last start against Tampa Bay on Friday, but before that had racked up 4 QS. He walks too many hitters to be an everyday option (every fifth day, that is), but in the right situation, he can be usable. If you cannot get one side of a pitching matchup, then look to the other SP if he has potential. We see that situation with Lewis and Santiago, where neither pitcher has been stellar but do have possibilities. Lewis should start pitching deeper into games and his 14:4 K/BB in his first three starts gives reason for optimism. Santiago has been unlucky, going 0-4 in his first five starts, but not really pitching that poorly, although also not pitching like a future ace, either. Pitching at home makes him a better option than he would be on the road. Lyons had a nice rebound from his first start filling in for Joe Kelly, and it looks like he will have to pitch himself out the rotation. He is a mediocre streaming option, but I have liked Cardinal pitchers for the past few seasons, so there is some potential for decent performance in the future. Maurer pitched well if only for 4.1 innings in his first start, limiting the Marlins to just a single earned run while going striking out 4 hitters (walking two and giving up 2 hits). Facing the Astros is a good reason to give him a chance to fill in for your team this week. Peacock needs to work on his control to become a dependable starter, as he gave up 6 walks in addition to 5 hits in his last start, although he did hold the A's to only 3 earned runs. I would prefer to use Maurer over the Astro starter, but if you are desperate, he just might surprise you. Nuno is filling in for now while Ivan Nova is out, presumable for the season with pending Tommy John surgery. If he can limit the base runners, he could stick in the No. 5 pitching slot for a while. Slowey was once a dependable starter, and he still demonstrates good control even if he is not a dominant pitcher. Pitching at home gives him a small boost in value.

Harrison has been activated by the Rangers, and the hope is that he can return to his very good 2011 and 2012 level of production. I would add him or activate him from my DL, but you may want to see how he fares Sunday against the Mariners and Brandon Maurer. Keuchel has tossed four consecutive QS, while limiting walks and missing bats, posting a 24:6 K/BB ratio. Of the Astro starters listed in this article, I like him a ton more than Peacock, and would even suggest that he be added as full time SP to your roster. Koehler's start on Sunday against the Mets was his first non-QS on the season, so I am chalking it up as an aberration, and would consider him at home against the Dodgers this upcoming Saturday. He does have occasional control issues, and this will impact his effectiveness, but he does have an ability to keep runners from scoring. Morales has racked up two wins in a row, and pitching into the sixth and seventh innings, while posting a 12:3 K/BB ratio. Pitching at home poses a risk, so only use him this start if you are in need of a fill-in pitcher, and if you can get Keuchel, Koehler or Harrison, I would leave him on the wire.

Gonzalez has the dual benefit of facing the Twins and pitching at Target Field. He needs to start pitching deeper into games so his owners can take advantage of his strikeout ability, but even going less than 6 innings, he can give you decent peripherals and will limit the free passes. His ERA and WHIP are inflated by his awful first start against the Tigers, but he will get those stats in line as he racks up the innings. McHugh had an excellent first start, striking out 12 over 6.2 innings without allowing a walk or earned run in collecting the win over the Mariners. He faces Young at home, and while I don't dislike Young, as you can see with his inclusion in the Sunday options, I like McHugh better, especially with him coming off another victory on Sunday against the As. Young's lack of control is another reason I would target the Astro's pitcher, and you would need to have a very limited waiver wire to want to rely on him in this start.