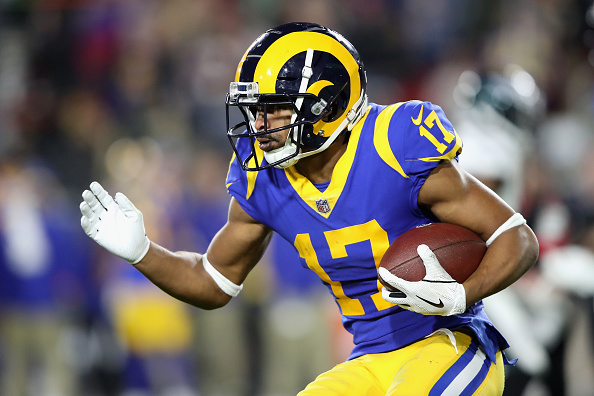 Some players get a label of being boring players. Many aim for a player with a high ceiling and the consistent players can get undervalued. Robert Woods fits this mold. He's not a sexy pick and based on his history, the likelihood of double-digit touchdowns is slim.

The Rams wide receiver has been a consistent wide receiver the last three seasons, yet he's falling further than he should in drafts. Woods was 13th in points per game in PPR formats last season and was 15th in 2018. Woods had these high finishes despite scoring seven total touchdowns in 2018 and three total last season. That does hurt Woods in non-PPR formats, but there's likely positive touchdown regression coming. Woods was the 19th WR in points per game in PPR formats in 2017 in 12 games in his first season with the Rams.

Woods had at least seven targets in 12 of 15 games last season and was second in yards after the catch.

He had six games of double-digit targets and had at least 15 points in PPR formats in six of seven games. The Rams had a shift in offensive philosophy last season, going from 11-personnel to more 12-personnel in the second half to help offset the offensive line problems. The Rams used 11-personnel 73 percent of the time in 2019 and it dropped to 67 percent after their bye week. The Rams used 12-personnel 30 percent of the time after the bye. Woods benefited from the move. He averaged 11.4 targets in the second half of the season. From Weeks 10-17, Woods had 52 receptions, which was second in the NFL. He was fourth in the NFL with 663 receiving yards.

There's no reason Woods shouldn't see 130 targets again. The Rams have 121 vacated targets with the departures of Todd Gurley and Brandin Cooks . Woods could score more touchdowns if the Rams throw more near the goal line considering Gurley scored 14 total touchdowns and there's questions if the backfield can produce that touchdown total again.

The receptions and yards will keep the floor high for Woods. The touchdowns will determine how good Woods will be and if he can ascend to a WR1 for fantasy. The expectations have to be low for touchdowns, but he showed two years ago with a total of seven touchdowns he could finish as a WR1.

The Rams don't throw to Woods much in the red zone. Last season, tight end Tyler Higbee led the Rams with 19 red zone targets and he didn't even get heavily involved in the offense until Week 12. Cooper Kupp had 18 red zone targets, Woods had nine and Gerald Everett eight.

Since June 1, Woods has an Average Draft Position (ADP) of 65.68 and is drafted on average as the 18th wide receiver in bestball10s. Woods is falling later in some drafts and I have seen him go in round five of many drafts. While wide receiver is deep in that range and there are a bevy of good receivers to select in that range, Woods is undervalued.