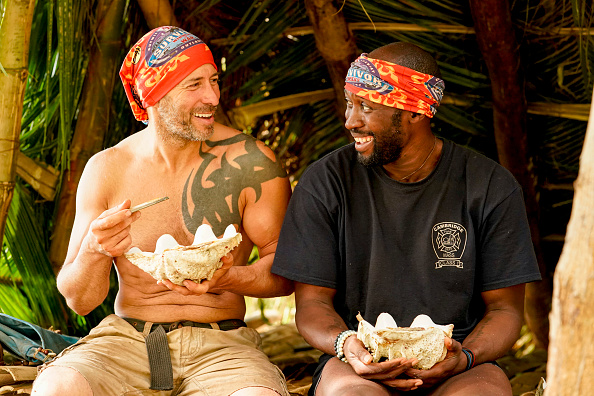 We are down to eight left on the island, although we are still due for one more Survivor to return from the Edge of Extinction. Last week it seemed like an easy vote, but when Tony found an immunity idol AND won individual immunity, he could no longer suppress his chaotic tendencies. He decided to save Jeremy and target Sophie who had an idol and a close alliance with Sarah. Despite Sophie having the idol, Tony pulled off a monumental blindside as she never saw it coming and went home with an idol in her pocket.

Tony put a huge gash in his relationship with Sarah by sending home her closest ally. It appears that the “Cops R Us” Alliance might be history again. Has Tony put a big target on his back for this episode? He certainly appears to, although with his two immunity challenge winning streak and an idol in his pocket it might not matter for this episode. It is getting a little more unpredictable by the week, and absolutely entertaining.

The past few weeks have been fast and furious with idols and advantages being played, so this won’t be as crucial this week. Although, I am convinced that fire tokens are still going to come in play again at least once before the season is over. It will also be interesting to see if Tony pays back Ben, Nick, and Jeremy for helping him last week with the Extortion penalty. Let’s take a look at who has what as we head into this week’s episode

This episode could go a lot of different ways. I have a feeling that a group is going to come after Tony, but I also think his paranoia will allow him to be blindsided and go home with that idol in his pocket. Kim could be a target as Tony needs to appease Sarah if he wants her to trust him, and Sarah wanted to vote Kim out last week. Jeremy has been a target for weeks, and Michele has been playing from the bottom all season it seems. However, with Sophie going home with an idol in her pocket, it makes sense that another one would be put back into the game. I am going to list almost every person here except for Kim because I do think she will get voted out. However, by my example lineups and what is written about each player, you will know where my confidence level lies here.

Tony ($35) – He has won two individual immunity challenges in a row, and he has that sweet idol in his pocket. He is always a wild card because he is so volatile and always rubs people the wrong way with his idol hunting, snooping around, and paranoia. However, Tony is a legendary Survivor player who not only is always thinking ahead, he truly (at least tries) to have his pulse on other contestants perhaps better than any player ever. While I am 100% sure that there will be a plot against Tony this week, I can’t see him going home. Tony has to be willing to play the idol, especially since he has proven that he is really great at finding it again when it is put back into the game.  He is always a candidate for an advantage coming from the Edge of Extinction too, as everyone out there knows he loves chaos. He is a lock to be in a lot of confessionals this week as he has been perhaps the best player this season for being entertaining on tv. Right now, this is Tony’s game, and everyone else is just playing in it.

Ben ($27) – I’m going with a “stars and scrubs” roster this week. FanDuel has priced everyone (outside of Tony) pretty close together so it is hard to work Tony and a few of the mid-range people into your lineup. And with Tony seeming to be safe, I want him in my lineup this week. This means you can still work Ben in, and then focus on the lower salaried Survivors. If there is indeed a new idol put out, Ben proved in his first season that he is good at finding them. If there isn’t, or if he doesn’t find it, Ben has been great at challenges all season long. He hadn’t made any real enemies this season until he got on Jeremy’s bad side last week. Somehow, he has been skirting by and has not viewed as a threat. It could be because he isn’t a top of the line strategic player, but Ben has played a pretty strong game this season. I honestly can’t remember a time that he has truly been a target at all. Things can always change, but it seems that Ben should be able to survive this episode. Tony saved Jeremy last week so he could try to go after Ben this week to appease Jeremy, but I also think it is just as likely Tony turns on Jeremy this week.

Sarah ($25) – She might be my favorite contestant left, but I am a little worried about Officer Sarah (her nickname from Cirie in the Game Changers season). She had been playing a near flawless game all season with her advantage, her alliance with Sophie, her strong social game, and her tenacity in challenges. However, a lot of that is now gone. She used her advantage, Tony voted out her strongest ally, and she is dangling on a wire at the moment. This will all come down to her relationship with Tony. We see in the commercials that she is (rightfully) IRATE that Tony blindsided Sophie. Will she go so strong at him that Tony votes her out like he did the first time they were on the show together? Or will he then target Kim, who Sarah wanted out last week, to try to regain her trust? Sarah is also a pretty strong challenge competitor and could win herself an immunity. She also could be chosen to go on a reward if someone else wins it and gets to pick someone as Sarah is very popular. There is a chance that they dumped her ally and shoot for her next, but Sarah is still looking strong to survive another week.

Denise ($24) – If you are going to try to work the mid-tier folks in, Denise would be the one I would use. She has won a couple of immunity challenges, she is playing a great social game, and has made a couple of big moves. She has been one of the bigger surprises of the season and is a certified bad ass. However, she isn’t one of the top end threats in the game, and her name has not come up much lately. It seems that the bigger fish have been targets of late, and Denise doesn’t qualify there. She is a great option for whoever gets voted out to give her their fire tokens, as she seems to be someone that is connecting with a lot of folks on the island. I like Denise to survive another week out on the island.

Jeremy ($24) – This guy has had his name come up more in the last few weeks than anyone else and is clearly one of the biggest targets out there. I am not fully comfortable using him unless you like to gamble. He is one of the most physical players left, and he has a never-say-die attitude when it comes to immunity challenges. Jeremy is a candidate to win individual immunity in any challenge, and he also has been in a ton of confessionals this season as he often speaks from the heart and is entertaining. Jeremy was the consensus vote for the second week in a row last week, until Tony decided to save him and go after Sophie. Will Tony vote with Jeremy again? Possibly. However, it is just as likely that this week that he is voted out as Jeremy would have been the vote two weeks ago if he didn’t leave Tribal Council. There are a lot of question marks surrounding Jeremy but he could reap big benefits if he survives.

Michele ($20) – Here is another person who has been on the chopping block lately. Michele has been fighting for most of the season on the wrong side of alliances or being left out of votes. She did have a couple votes sent her way last week, but that was because they were splitting votes in case of an idol. The votes were headed towards Jeremy. She still does have that 50/50 coin advantage where she can flip it to try to win herself immunity. It is getting the feeling like she better think about using it soon, which would get you points. Michele has also been great TV this season and has been in a great deal of confessionals, which also gets you points. The only knock on Michele is that she hasn’t performed well at challenges this season, so you are unlikely to get points there. She has embodied the term “survivor” this season. She did vote Sophie out with Tony, Nick, and Jeremy, so should that alliance stay together that could keep her safe, but as I have already eluded to, you can’t count on Tony to stay consistent from week to week. Michele has been one of my favorites this season, and in my opinion has a great chance of lasting another week.

Nick ($18) – I have not been a Nick fan at any point this season, but I am using him for two reasons. The first is that he is the cheapest on the slate and I need a low salary to help get my studs into the lineup. The second is that it appears that the power players are playing chicken with each other, and the lower level people are safe at least for now. Nick has had some votes cast against him, but it was more in the spirit of splitting votes in case of idols than actually targeting him. Nick isn’t great at challenges, he isn’t a highly televised player, and outside of Michele, I’m not sure how many others would give him a fire token if he was voted out. I know, none of this is instilling confidence in using Nick on your roster. However, I am telling you that I think he will make it through the episode and he will help you with roster construction to get the real point scorers on your squad. I am not quite sure how this dude is a lawyer, but maybe in Kentucky things are very different. He isn’t going to wow you in any possible way, but he is cheap, and he should last another week.