Ryan Hallam breaks down the first baseman you should be reconsidering if you're in an OBP league instead of a standard league. 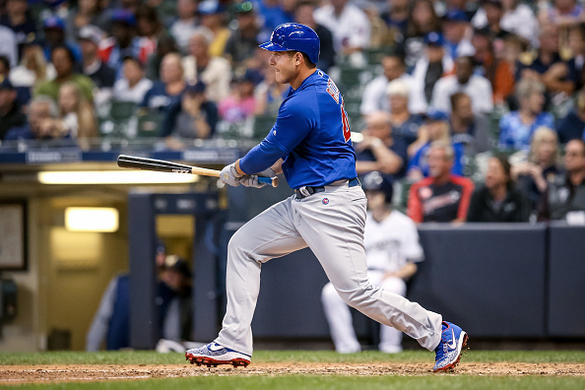 We noted in the last article that first base wasn’t the deepest position on the fantasy diamond, and we gave you a handful of guys that could help you if you waited on the position. Now we will look at first base from a different lens. Many leagues are now moving to on-base percentage (OBP going forward) as a category and shifting away from batting average. This requires a little more research, as we aren’t totally used to OBP being quoted yet when talking about player stats. However, if it is now one of the 10 statistical categories that your league is basing their scoring on, you’ll need to understand which guys to target more when doing your fantasy draft. Below are five first baseman who bring significantly more value in OBP leagues. Each of them had an OBP in 2019 that was over 100 points higher than their batting average.

Anthony Rizzo , Chicago Cubs (BA .293, OBP .405). While the ADP continues to fall a little each year, Rizzo is still a solid fantasy baseball player. He hasn’t topped 30 home runs in two consecutive seasons, but last year was the first time he didn’t top 100 RBIs since 2015. Rizzo gives you lots of extra value in OBP leagues though. He has walked 70 or more times in seven consecutive seasons, and in the last three seasons has only struck out a few more times than he walked. Bump him up a round or so in your OBP league.

Max Muncy , Los Angeles Dodgers (BA .251, OBP .374). He is eligible all over the infield, and played 65 games at first base and he is set to play first base most this season. His multi-positional eligibility gives him added value in fantasy, but his OBP certainly is another bump in leagues that offer that as a category. In 2018, his batting average was .263 and his OBP was .391 and last year his stats were .251 batting average and a .374 OBP. Muncy has hit 35 home runs in back-to-back seasons and could creep into the fourth round in OBP leagues.

Rhys Hoskins , Philadelphia Phillies (BA .226, OBP .364). He is a young player with some great power potential, but he falls farther in drafts because of his awful batting average. He hit .259 in 2017, it fell to .246 in 2018, and all the way down to .226 last season. However, his OBP has been over .350 each season of his career. He walked 87 times in 2018 and a whopping 116 times last season. He goes in the ninth round of most leagues that play with batting average, but with his 30 home run capability and strong OBP, you can definitely move him up to the sixth round or seventh at the worst.

Carlos Santana , Cleveland Indians (BA .281, OBP .397). His batting average last year was .281, and that was the highest of his career. Most of his career, though, Santana fell down fantasy draft boards because of his horrible batting average. His batting average was below .235 in three of his last six seasons. However, his OBP was never below .350. He has hit 30 home runs in two of the last four seasons. Santana has walked 90 or more times in eight of the last nine seasons. He has never driven in 100 runs in his career, but Santana is a really solid starting first baseman in fantasy leagues that use OBP as one of their categories.

Luke Voit , New York Yankees (BA .263, OBP .378). With Edwin Encarnación back out of town again, Voit will certainly be the starting first baseman for the Yankees. Obviously, he can’t keep the pace up at the end of 2018, but he still was solid in 2019 although he dealt with injuries. In just 500 plate appearances, Voit walked 71 times. He has a great batting eye, and there is no reason to think that Voit won’t get a good number of walks to begin with. He is definitely more of a corner infield option rather than a starting first baseman for 2020 fantasy baseball leagues, even those that do take OBP into consideration. Even with that being said, he certainly deserves to be bumped up a round or two based on the amount of times he walks.

Daniel Vogelbach , Seattle Mariners (BA .208, OBP .341). The Mariners DH played 57 games at first base last season so he will carry that eligibility in 2020. The big guy at 6’0” and 250 pounds, Vogelbach isn’t getting on base with any sort of ground ball. He tends to be a long ball (30 homers) or a strikeout (149 times) type, which meant that his batting average was just .208. However, he showed a solid batting eye and he walked 92 times to get his OBP to a solid .341. While he is a one trick pony in leagues that uses batting average, he certainly belongs to be taken a few rounds earlier when OBP comes into play.

Now that we have given you some examples of guys who help you with OBP now is the time to mention one more time how important it is to know the rules of your league. Don’t just assume that it is the same old league that you are used to. Whether there might be an innings limit, using OBP, quality starts instead of wins, or any other change to categories or rule changes, it is very important to know how your league works to give you the best chance to win. Godspeed, and good luck in your leagues. And, of course, wash your hands and stay the hell home!