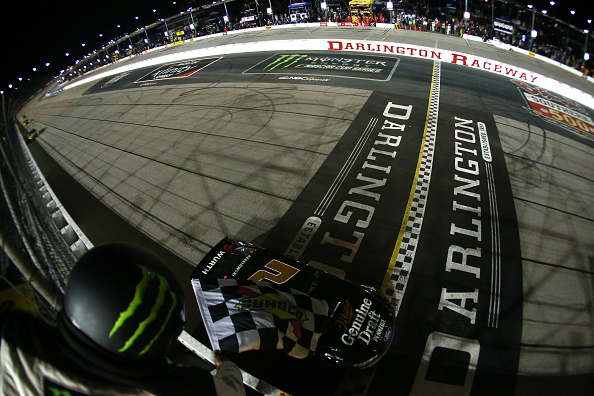 The only Sunday evening/night race of the year happens this weekend down in South Carolina at one of the most storied tracks in NASCAR. Darlington Raceway or the “Track Too Tough To Tame” or “The Lady In Black” is one of the most challenging layouts in all of stock car racing and wears down drivers just as much as it wears down the tires on the cars. So just what makes it so challenging? Well you could check out the Track Breakdown or the Podcast for that explanation but in general, it is a uniquely-shaped track that has two different sets of corners on it, it’s a different length than any other track, and it’s an old racing surface.

Tires will be a pivotal part of this race as the drivers that can make them last and keep track position will be driving up at or near the front late in the race. In fact, tires are so important here that NASCAR has given teams 14 sets for the race, the most of any race during the season. So expect everyone to want four tires just about every pit stop as the fall-off is drastic and quick.

In the 115 previous races run at the Cup level at Darlington, 70 winners have come from the top-five starting spots with 20 coming from the Pole and the last one being in 2014 (when the race was in April). In the last four races here, that have all been held this weekend on the calendar, the winners have come from P13, P8, P9, and P13 in the starting grid. In four of the last five a driver has led between 196-284 laps while the one year a driver didn’t top 196, two led 124 apiece. Laps led will be a key stat this week, however, keep in mind that with the cars racing closer this year, it has reduced the laps led dominance a bit at intermediate tracks. There is certainly position differential upside this week as in three of the last four races here there have been six or more drivers posting double-digit positive PD marks.

The race is scheduled for 367 laps around the 1.36-mile track for a total of 500 miles on Sunday night and the stages are 100-100-167. This will be the ninth race this season run in this package (550-horsepower aero package) run at intermediate tracks and the previous eight races are listed in the momentum section of the track breakdown so you can see exactly who’s done what in those contests.