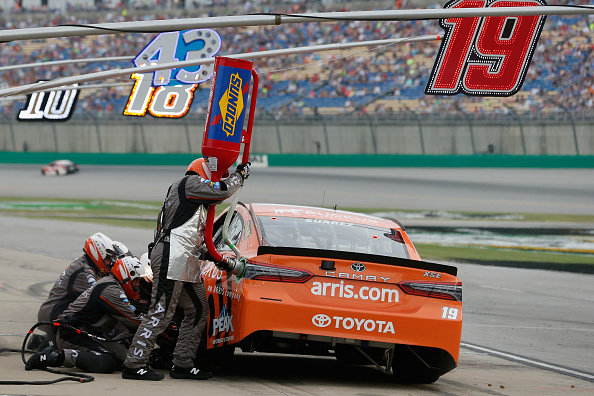 After the craziness of Daytona last week, it’s nice to get back to a 1.5-mile track this week, however, be careful what you wish for in that regard. Kentucky is anything but a tame intermediate track. Just like the kick and bold flavor of the Bourbon and Whiskey, they make in the Bluegrass State; the track will give you a kick and require boldness to make it through the race and find your way to Victory Lane.

It has only been on the Cup schedule since 2011 and in that time,  it has gone through a repave and reconfiguration in 2016. The track used to be even banking all the way around but now Turns 1 & 2 are steeper than Turns 3 & 4 and that side of the track is also narrower than it previously was. The new layout has made Turn 3 one of the most challenging corners on the Cup schedule as it is an incredibly flat entry and the banking doesn’t really kick in until about halfway through the corner, meaning a car can easily step out on a driver or havoc can ensue when a driver tries to correct the line in the middle of the corner. That’s also why the track will put down PJ1, traction compound, to help improve the grip in the outer grove and make it more than a one-grove track.

In the eight races that have happened at this track at the Cup level, the pole-sitter has won three times, including last year, while the outside pole-sitter has won twice. Over the last five races, at least one driver has led well over 100 laps of the 267 in the scheduled distance giving you the chance for a laps led dominator on Saturday night. With the weather starting out pretty warm and then cooling off under the lights the cars that start out strong may not finish that way if the crews can’t keep up with the changing track and vice versa. The few night races we’ve had this year with this package have shown that the cars that are good before the sun goes down, don’t always finish that strong so keep that in mind when building lineups. The cooler temps will also induce closer racing which can help position differential marks as well.