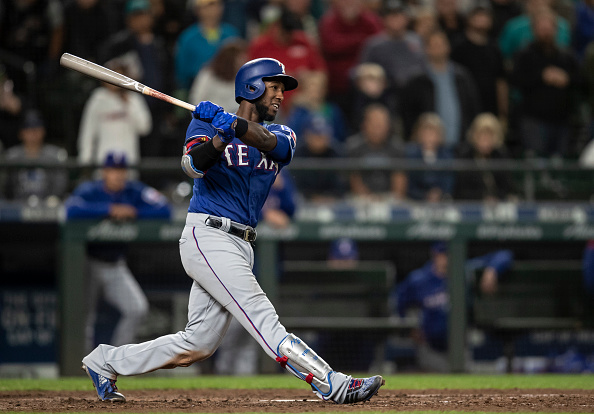 As the off-season continues to evolve, Tampa Bay took part in another three-way trade, this time with Texas and Oakland involved. Jurickson Profar will head to Oakland and take over as the primary second baseman according to general manager David Forst. With the money saved on departed Jed Lowrie with Profar at second, the A’s can address needs in the rotation. Texas, looking to rebuild a replete farm system, acquires three pitchers and a utility player for Profar’s departure. Tampa Bay receives reliever Emilio Pagan , minor league reliever Rollie Lacy and the 38th pick in the upcoming draft, giving them four selections in the top 61. On the surface, this makes sense for everyone involved, though the Rays did part ways with a talented southpaw in Brock Burke who immediately moves to sixth in the Rangers prospect rankings.

On the heels of a career year, the Rangers sell high on Jurickson Profar , trading him away to a division rival. While this seems intriguing, Profar recorded career highs in home runs (20), RBI (77) and walks (54) in 2018. He’s also one of five American League players with at least 35 doubles, 20 home runs, 75 RBI and 10 stolen bases last season.

Not only can Profar help fantasy owners looking for production across all five categories, he will provide roster flexibility in the year ahead. Profar logged 68 games at shortstop, 51 at third base, 24 at first base and 10 at second. He also finished with a 9.1 walk percentage against a 14.8 strikeout rate while growing his isolated power to .204 in 2018. Profar also increased his hard hit percentage to 37.3 while pulling the ball 39.8 percent of the time with a 13.2 home run per fly ball rate. Here’s a look at his line drives and fly balls from last season with Oakland’s park as the backdrop: 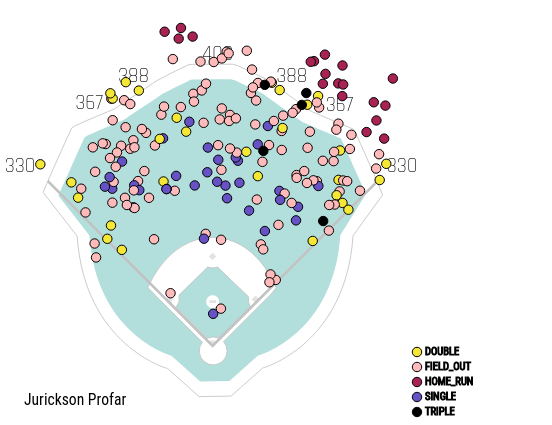 Ballpark effects aside, a move to Oakland will not cause Profar’s power to collapse. Where it could hurt him will be in average. Profar finished with a 12.6 infield fly ball percentage. If he continues to pop up baseballs, his average will suffer in Oakland due to the expansive amount of foul territory in his new home ballpark.

Last, but not least, how much will Profar run with the A’s? In 2018, no team stole fewer bases (35) than Oakland out of 53 attempts all season. Presently, Profar’s projected to his second which should boost his runs but potentially lower his Steamer RBI total. As a group, the players who batted second for the A’s only stole four bases over the course of 675 at-bats. Profar will score more runs hitting higher in the order, but if his home runs, RBI and stolen base numbers decrease, fantasy owners will need to plan accordingly.

Without the benefit of seeing into the future, Profar offers fantasy value in his versatility, solid average and upside in runs. Just plan for other counting statistics to potentially decrease.

Rangers fans should be encouraged by the returns of the Profar trade, especially in Brock Burke and Eli White. Burke won nine games across two levels (High-A and Double-A) last season with a combined 3.08 ERA and 158 strikeouts in 137.1 innings. His fastball velocity jumped in 2018 and he now works around 95 MPH in his starts. If his secondary pitches improve, he could see time in Texas this year or be in the rotation by 2020 for Texas.

Eli White should compete for a roster spot this spring due to his positional versatility and solid on-base skills. White appeared in 130 games at Double-A with nine home runs, 55 RBI and 18 stolen bases with a .306/.388/.450 slash. Through 310 career games in the minors, White’s recorded a 36 percent on-base average. He’s received comparisons to Chad Pinder and Ben Zobrist if looking for a major league comparison.

Both Yoel Espinal and Kyle Bird could see time in the Rangers bullpen in the year ahead. Bird went 3 - 3 with a 2.39 ERA in 43 games between two levels with 88 strikeouts in 75.1 innings. Espinal also split time between time at two levels with 10 saves and a 2.25 ERA last season.

A perfect candidate to be an “opener”, Emilio Pagan will head to the Rays. Pagan appeared in 55 games last year with a 4.35 ERA, three wins and a 60:19 K:BB in 62 innings. Over the last two years, Pagan’s recorded a 3.88 ERA and limited right handed hitters to a .196 batting average against. Tampa Bay also receives reliever Rollie Lacy and the 38th pick in 2019’s draft.

Be sure to stay ahead of the competition with Fantasy Alarm as the Hot Stove continues to heat up.