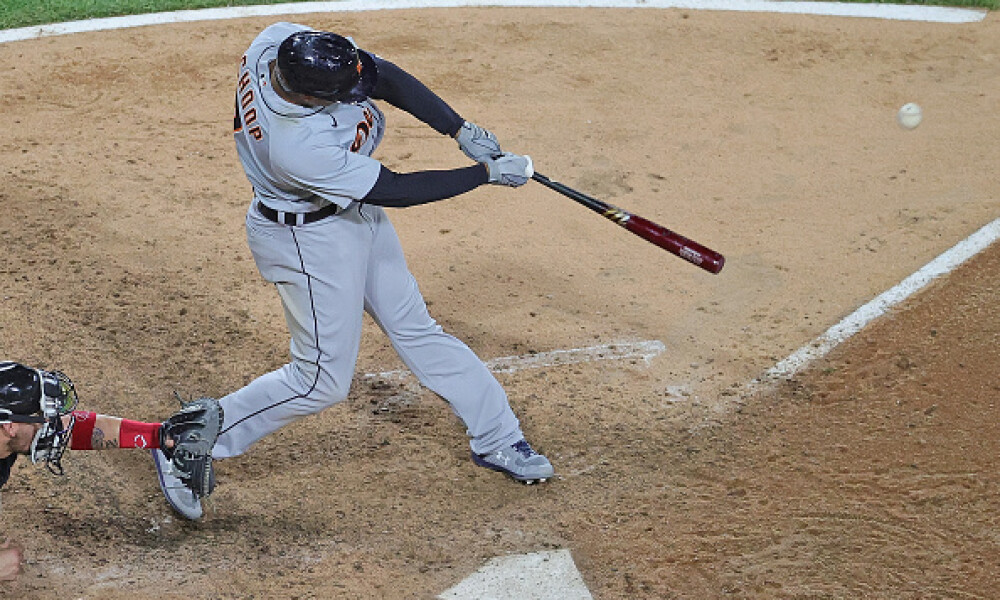 Jonathan Schoop (DET); FAAB Bid: 10-12% - Schoop’s bat has really come to life recently. Over the last two weeks he’s slashing .408/.482/.837 entering Sunday with six home runs and 20 hits over his last 13 games (you can add a double to that total from his performance on Sunday). This week’s list of hitters to add include plenty of guys coming off a hot start to the month of June. I probably like Schoop the most considering we have consistently seen fantasy production from him the last five years so strike while the iron is hot because the ownership is spiking.

Ryan Mountcastle (BAL); FAAB Bid: 7-8% - Mountcastle is a member of the group of guys that have been on a scorcher over the past week. Since Memorial Day he has four multi-hit games, seven extra-base hits (four home runs), and ten RBI. He’s raised his batting average to .254, but he just doesn’t walk enough in OBP leagues, but at least the bat has come alive of late.

Jonathan India (CIN); FAAB Bid: 3-4% - India managed to find himself hitting leadoff for the Reds on Saturday and Sunday as he’s really looked better at the dish of late. Since last Sunday (May 30th) he has four multi-hit games with two home runs and six runs scored in that span. If you lost Evan Longoria you can look to India as a decent replacement for cheap and he’s widely available on waivers. It’s heating up in Cincinnati which means it’s becoming the hitter’s haven we know it can be and the Reds are entering a six-game homestand for the coming scoring period.

Hunter Renfroe (BOS); FAAB Bid: 2-3% - Renfroe is a very streaky hitter and he loves swinging for the fences. Since May 26th he’s slashing .484/.515/.871 with 15 hits (eight for extra bases) and ten runs scored in that span. Boston’s actually been slotting him right in the middle of the order and if you can get him for free, then great. I wouldn’t spend more than 3% of your budget on him because as hot as he is right now, he can easily cool off. He’s a career .232 hitter but he did rip 25+ home runs in three straight seasons with San Diego at one point in his career.

Patrick Wisdom (CHC); FAAB Bid: 2-3% - I don’t know a ton about Wisdom other than he’s 29 years old and he looks like he’s had a real journeyman-esque career. He’s flashed plenty of power at the Triple-A level. But he’s stepped up to the plate both literally and figuratively when David Ross has elected to start him. In nine games as a starter he has seven home runs, two doubles, and nine runs scored and ten RBI, and as of this writing, the Cubs and Giants are still playing. It’s highly unsustainable, but if he finds his way into the lineup consistently going forward we can take a shot. The production alone is worth the look.

Framber Valdez (HOU); FAAB Bid: 15-20% - Consider this last call on Valdez. I frequently mentioned him in sporadic waiver appearances as a friendly “Hey! Don’t forget about this guy!” kind of acknowledgement. In his first start he was limited to just four innings against the Padres but the training wheels came off against the Red Sox last Wednesday and he tossed seven innings of one-run ball with ten strikeouts. Valdez has the ability to be a top 40 pitcher and he was floating around on waivers in 12-team leagues for the longest time and it looks like he’s recovered from the fractured finger. He’s still available in some shallow leagues and I would pay a pretty penny to pick him up. He gets two starts this coming week against the Red Sox and Twins.

(CHC); FAAB Bid: 7-8% - Alzolay averages over a strikeout per inning and he’s picked up three wins in his last four starts. His outings won’t always be squeaky clean. In eight of his ten starts he’s allowed at least two earned runs and he does have a 1.48 HR/9. Alzolay’s one of the few two-start pitchers across the MLB landscape next week. The first start comes against San Diego which carries inherent risk, but the second start against the Mets to close out the scoring period is definitely in play. He’s available in over half of ESPN leagues and about 25-30% of CBS Sports leagues.

Tony Gonsolin (LAD); FAAB Bid: 5% - Gonsolin will finally make his debut on Tuesday. He was pretty valuable in last year’s shortened season with a 2.31 ERA (3.33 xERA, 2.29 FIP, 3.80 xFIP) and he averaged about a strikeout per inning. As the season progressed the Dodgers let him pitch deeper into games, which explains why he only had two wins in eight starts, but those two W’s came later in the season. I’d say you should expect something similar to start his 2021 campaign. He’s not going to pitch deep right away, but they’ll build him up to six or seven innings over time. Not to mention, the lineup providing him run support is pretty damn good.

Tucker Davidson (ATL); FAAB Bid: 3% - I’m not sure how long Davidson sticks in the rotation, but he was brought up last week to face the Nationals and he did pretty well. He went 5.2 innings and gave up just one hit although five walks aren’t very good. My guess is that the Braves will roll him out there until he starts to suck or team start hitting him… Which still means he’s sucking. He gets a road matchup this week against the Phillies and then is slated for a very difficult start next week against the Red Sox. I feel like he hasn’t reached his strikeout ceiling that he flashed in the minors so while those numbers have been so-so through two starts, I wouldn’t be surprised if he started generating a strikeout per inning.

Lucas Sims (CIN); FAAB Bid: 4-5% - I wish I took my own advice. I put Sims in the waiver wire a week ago after he recorded a couple saves heading into last weekend and sure enough, he got a save Thursday and Saturday. He has a 4.91 ERA which is gaudy beyond belief, but he has a 2.77 xERA. Our very own Joe Gallina has him listed as the closer in the latest Bullpen Report, but for what it’s worth Joe also has the Reds bullpen appropriately labeled red which means the situation isn’t set in stone. A bad appearance or two and he could be pulled from the job. Either way, he has four saves over the last two weeks.

Cole Sulser (BAL); FAAB Bid: 3% - This is a bit of a toss-up because Sulser and Paul Fry have recorded the last two saves with Fry getting the most recent one on Friday. The Orioles had a stretch from May 7th to May 31st where they won just two games so we didn’t get a great look at who the closer was. And because the team is so bad, neither of these guys are considered must adds by any means. But Sulser’s made 19 appearances, touts a 13.71 K/9, and he’s allowed earned runs in just three appearances. Gallina has Paul Fry currently listed as the closer, and he could be right. But I think Sulser has more upside here.

Scott Barlow (KC); FAAB Bid: 0-1% - He might not be worth picking up but his usage the last few days has been interesting. He got the save on Thursday and was used in the ninth inning of Sunday’s game in a non-save situation, but he was brought in when the Royals were down 2-1 heading into the ninth inning. So, the high leverage work is nice to see. He’s not the closer yet because Greg Holland has still been getting ninth inning work as well, but in a holds league he could be worth a look.