Chris Morais takes a look at the key injuries in fantasy hockey this week. 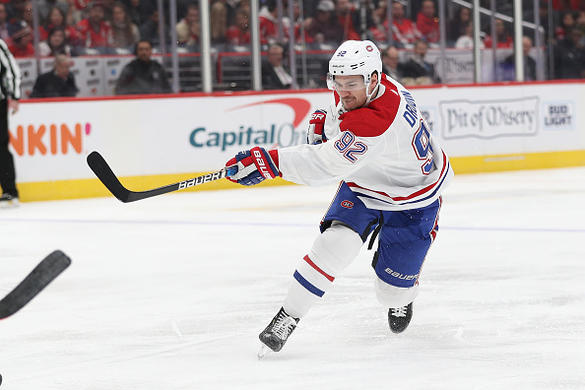 Welcome back to the Fantasy Hockey Injury Report. Hockey is back, which means injuries are back too. You can’t avoid them, but we can get a head start and plan around them. The injury report will be out every week to help you plan the rest of your fantasy hockey week. Let’s take a look at which key players are dealing with injuries.

After not suiting up for Boston’s game against the Capitals on Saturday, Patrice Bergeron is a game time decision for Tuesday's game against New Jersey. The Bruins’ centerman isn’t expected to be out for long, but should he not be ready to go on Tuesday, weekly fantasy owners may want to start looking for help on the waiver wire.

After starting the season on fire, Jonathan Drouin is expected to miss a minimum of six-to-eight weeks due to a wrist injury. The Quebec native had...

D. Shore - F
VAN
The Carolina Hurricanes have signed Drew Shore to a one-year, two-way contract.
The 29-year-old last played in the NHL during the 2016-17 season with the Vancouver Canucks. He split last season with Minsk Dynamo and Nizhny Novgorod Torpedo of the KHL. There's a good chance he'll spend at least the majority of the season in the minors.
Added Yesterday 8:23 pm (EST)
Added Yesterday 8:23 pm (EST)

J. Siegenthaler - D
WSH
The Washington Capitals have handed Jonas Siegenthaler a one-year contract extension.
The deal will pay him $800,000 at the NHL level. The 23-year-old blueliner is coming off a season where he totaled two goals and nine points in 67 games. He has no fantasy upside.
Added Yesterday 8:22 pm (EST)
Added Yesterday 8:22 pm (EST)

A. Greer - F
NYI
The New York Islanders have signed A.J. Greer to a one-year, two-way contract extension.
The deal will pay him $700,000 at the NHL level and $100,000 in the AHL ($125,000 guaranteed). The forward was acquired from the Colorado Avalanche on Oct. 11 in exchange for defenseman Kyle Burroughs. He'll battle for a bottom-six roster spot in training camp.
Added Yesterday 8:20 pm (EST)
Added Yesterday 8:20 pm (EST)

R. O'Reilly - F
STL
Ryan O'Reilly could be next in line to be the captain of the St. Louis Blues.
The Blues will be looking for someone to replace Alex Pietrangelo, who signed with Vegas, and O'Reilly appears to be the top candidate. St. Louis GM Doug Armstrong mentioned that O’Reilly would be "part of a group of players. I think we’ve been a team that’s relied on the masses (more) than any one individual.” It doesn't sound like the team is in a hurry to make a decision, but O'Reilly makes a great deal of sense. The 29-year-old center won the Conn Smythe Trophy when the Blues won the 2019 Stanley Cup. O'Reilly has also been a key player during the regular season with 40 goals and 138 points in 153 games with St. Louis since he was acquired from Buffalo.
Added Yesterday 6:16 pm (EST)
Added Yesterday 6:16 pm (EST)

Jeremy Rutherford for The Athletic

M. Hoffman - F
FLA
Mike Hoffman has received plenty of interest as an unrestricted free agent, per agent Robert Hooper.
Hooper said that 13 teams have expressed interest in Hoffman, which includes five or six that he would classify as serious contenders. "I think teams are a little paralyzed at this point in time by the flat cap,” Hooper said. "I think some of the teams that would love to add Mike Hoffman to their roster have had difficulty moving pieces around in order to make room for a guy like Mike. The feedback on him has been very positive. It’s just a matter of making it fit. I think it’s just a situation where until we know when the puck’s being dropped, there’s no pressure on either side to really do anything." Hooper also confirmed that Hoffman is willing to sign a one-year contract.
Added Yesterday 5:01 pm (EST)
Added Yesterday 5:01 pm (EST)

Adam Vingan for The Athletic

K. Russell - D
EDM
Edmonton has signed Kris Russell to a one-year contract extension.
The new deal will go through the 2021-22 season with an average annual value of $1.25 million. Russell had one more season left on a four-year, $16 million contract. He recorded nine assists, 101 blocks and 71 hits in 55 games during the 2019-20 campaign.
Added Yesterday 4:29 pm (EST)
Added Yesterday 4:29 pm (EST)

D. Strome - F
CHI
Contract talks between Dylan Strome and the Chicago Blackhawks are in the "early stages," per GM Stan Bowman.
"The contract for Dylan is not finalized yet," Bowman said Tuesday. "We've had discussions probably in the early going, but I think I would anticipate we're going to get that done." Strome is a restricted free agent after completing his entry-level contract. He was not eligible to file for salary arbitration. Strome registered 12 goals and 38 points in 58 games last season.
Added Yesterday 3:44 pm (EST)
Added Yesterday 3:44 pm (EST)