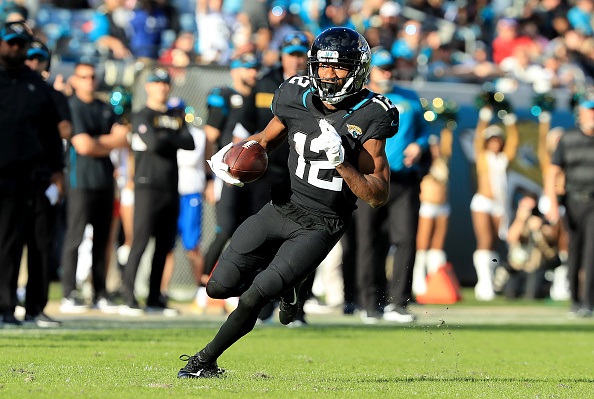 Another full week of mock drafts by the Mock Draft Army on RTSports has us all fine tuning our preparation for the upcoming fantasy football season.  There are a few movers in the ADP, most notably players that have gotten injured.  Zeke and Gordon continue to hold out although there are rumblings that Zeke and possibly Gordon could come to terms prior to week 1 getting underway.  Let’s take a look at some mid to late round players that the Army liked this week and you should too!

One of my favorite mid round targets is Dede Westbrook who’s ADP has risen 6 spots in August on average.  His MDA ADP is 101.7 compared to 105.3 averaged across RTSports, NFFC, FFPC, Yahoo and the Army.  Westbrook is being taken as a WR4 as the 39th WR off the board.  He’s only projected for three TDs on our site, but I’ll take the over on that one.  With Nick Foles at the helm and Westbrook receiving many targets already in the preseason, I’m looking to target him in the 8th-9th round.

Don’t fall into the trap that some do and expect a player to be there at their ADP number.  If there is someone you really like, pay close attention to how the draft is going at least a round and maybe even 2 rounds ahead of time.  Don’t expect he’ll be there at pick 99 if you really want him.  In Tuesday night’s 12 team mock, Dan Malin took him at pick 91. Coincidentally, I took him with pick 99 on Monday.  In Wednesday’s 10 teamer, Green Akers snagged him with the 73rd pick.  Westbrook is a riser and prepare to take him a bit earlier if you want him.  Again, this is the purpose of the Army; finding out these trends before you draft, rather than relying on cumulative ADP that incorporates drafts from May and June. 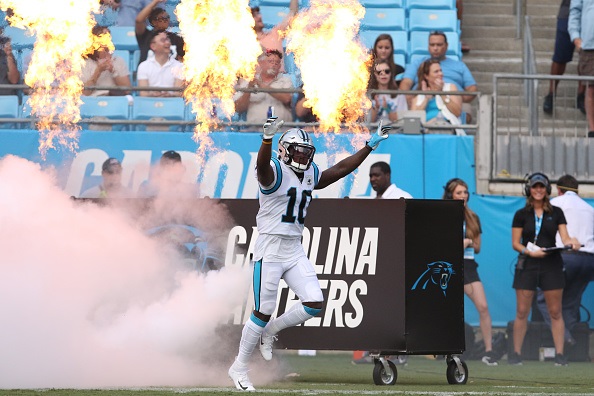 Another WR that has moved up the boards by the Army is Curtis Samuel of the Panthers.  He’s another mid round selection that warrants your attention. His MDA ADP is 107 about a half round later than Westbrook’s.  He’s been touted at the best offensive player in camp by Brendan Marks of the Charlotte Observer.  His opportunities were limited last year, but he should be an every down player this year.  With an ADP this week of 88, Samuel is also moving up in drafts.

Other mid-to-late round wide outs to keep an eye out for, who have seen their ADPs rise in August, are Michael Gallup , Donte Moncrief , Jamison Crowder , and Tre’Quan Smith.  Gallup’s rise could be tied to Elliott’s holdout with drafters expecting more passing if Zeke is out.  There have been reports of Moncrief falling into the WR2 role in Pittsburgh as he battles James Washington .  Crowder has looked good in the Jets’ new offense and seems to be a consistent target of Sam Darnold . Smith will battle Jared Cook and Alvin Kamara for targets that don’t go to Michael Thomas .  These are four players who could be great late round picks that will add to your depth and have considerable upside.

There have been a few running back risers due to injuries to their teammates or poor performances by them.  As we get news today of a potential ACL injury to Lamar Miller , expect Duke Johnson to get an immediate boost. *Editor’s note: Miller has a torn ACL and MCL. The Texans may look to some potential cuts by teams leading into the beginning of the season.  The Army has become more enamored with the Eagles’ Miles Sanders.  Sanders’ ADP has risen by a full round in overall ADP and he goes about 20 spots earlier in the MDA.  There appears to be confidence in Sanders, but there is no reason to so optimistic.  The Eagles offense will not change.  For the past few years, the Eagles have not had a feature running back with constant churning by Duce Staley.  Not buying into the Army here and agree with the higher ADP of the consensus.

Another back the Army is taking almost 2 rounds early is Peyton Barber .  With news out of camp that Ronald Jones is having troubles, Barber has become a much earlier target.  His ADP of 133 is starting to come down.  The Army likes him a lot more with an ADP of 108. His move up the board should continue if the reports continue to favor him getting the majority of the work.  There are some reports of Dare Ogunbawale looking good in camp but there’s no indication he’ll be getting a large portion of the workload.

The unbelievable news that broke with the announcement of Andrew Luck ’s retirement will send the fantasy world reeling especially with drafts occurring as we speak.  Whoever took Luck as their QB1 will have to pivot to another, Jacoby Brissett has filled in before, but he’s going to cause a hit in production by other players on the Colts such as TY Hilton, Marlon Mack and Devin Funchess .

The Mock Draft Army will be entering its final week.  Continue to join us on RTSPorts and hone your skills prior to your drafts.  Look out for my weekly series covering Survivor Pools starting this week.  As always you can find me on twitter and hit me up with questions @gasdoc_spit.