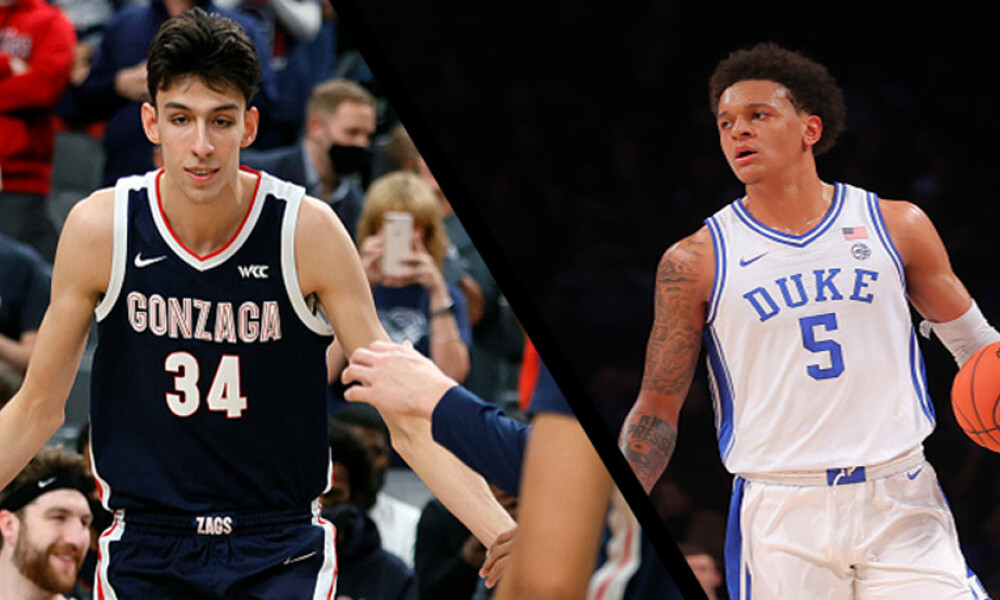 The 2022 NBA Draft is just over a month away and it's time to get familiar with the players who will be NBA lottery picks. From Chet Holmgren and Paolo Banchero to Jabari Smith and Jaden Ivey, the top 10 of the NBA Draft first round will be stacked with elite prospects. We now know the Orlando Magic have the luxury of picking No. 1 overall after winning the 2022 NBA Draft Lottery on Tuesday. After them, it'll be the Oklahoma City Thunder at No. 2 and the Houston Rockets at No. 3. Check out the full order of the NBA Draft lottery picks here. Before the NBA Draft commences on June 23rd, it's time to get familiar with all the top college basketball prospects, international players, and G Leaguers who will go off the board in the top 10 picks. These are players who will one day impact your fantasy basketball lineups, NBA DFS contests, or NBA daily bets. As you're gwatching the NBA Playoffs, it's never too early to look ahead and see which players will be heading to the teams that are watching from home. Let's take a closer look at the 2022 NBA Draft top 10 prospects.

If you watched Gonzaga play college basketball at all last year, it was impossible not to notice Chet Holmgren. The lanky frame is one thing, but his unique skillset should make him the first or second pick in the draft. Holmgren is an elite shot-blocker and defensive presence as a 7-footer with an even longer wingspan. Plus, he boasts a very versatile offensive game with legit three-point range and surprisingly solid ball-handling skills for his size. The big worry, though, is how his thin frame and lack of strength will hold up against NBA centers. If Holmgren can bulk up a little, similar to Anthony Davis coming out of college, then he’ll be an elite two-way player eventually. Just check out how well he can dribble and finish in transition with guard-like skills in a big man’s body.

Though he may not go No. 1 overall, Jabari Smith has arguably the most NBA-ready shooting touch in this draft. He’s lethal from the mid-range with a jump shot that should translate right over as a rookie. Smith also proved to be a deadly three-point shooter in his freshman season at Auburn, draining 42% from deep. The shooting touch with his size at the power forward or small-ball center spot will make him valuable for years. He’ll need to improve as a ball-handler, but everything else is already there offensively. Just check out how polished Smith’s jumper and offensive skills were this past season against tough SEC competition.

Even with all the NBA-caliber talent at Duke last season, Paolo Banchero headlined the group as a clear top prospect who anchored a Final Four run. He’s arguably the safest option at the top of teams’ big boards while Chet Holmgren, Jabari Smith, and others are higher risk/reward picks. Banchero has a polished offensive skillset with the bigger, stronger frame to post up and score inside as well as the passing, ballhandling, and vision to be a do-it-all playmaking for an NBA attack. Banchero’s raw talent was a big reason why Duke made a deep run in the 2022 NCAA Tournament.

Jaden Ivey is universally viewed as the best guard in this draft class after he made a big jump in his sophomore season at Purdue and starred for one of the best offensive teams in college basketball. He has the athleticism and quick first step to drive hard and finish at the rim. When not scoring on his own, Ivey showed the ability to pass and make plays for his teammates – though he wasn’t asked to play prototypical point guard in college. The two worries surrounding Ivey, though, are his lack of defensive skill/effort at times and the propensity to turn the ball over on the offensive end. If he can improve on both of those areas, he could eventually prove to be the best player in this draft. To get an idea of Ivey’s ceiling, check out this side-by-side video comparison to Ja Morant.

Shaedon Sharpe is the big wild card in this draft with a boom-or-bust factor for any NBA team that drafts him. Why? Well, the raw talent is certainly there but no one has seen Sharpe do it for a full season against tough competition. He was ranked as the No. 1 overall high school prospect in the 2022 class before enrolling early at Kentucky to reclassify into this current draft class. However, Sharpe didn’t appear in a game for UK after joining the team in January and it gives a bit of an unknown to his current skill level. As for that skill set, the 19-year-old is a fantastic perimeter shooter with the ballhandling and athleticism to be a score-first guard in the pros. Though it is against high school competition, Sharpe’s highlight reel from the 2021-22 season shows off his ability to knock down threes and finish well at the rim.

If AJ Griffin played on any other college basketball team last year, he might be in the conversation to be the No. 1 overall pick. You have to wonder what Griffin's stats would've ended up at if he was the top offensive option somewhere else besides Duke. Instead, he played in the shadow of Paolo Banchero and others in his lone collegiate campaign while also battling an early-season knee injury. Even still, his skills were on full display when given the opportunity. Griffin was a lights-out three-point shooter at 44.7% and has an NBA-ready offensive game. The only question is his defensive ability, though that should come in time. It's hard not to like the scoring upside and skillset he showed off as a freshman.

This time last year, Iowa fans were wondering whether Keegan Murray could make the sophomore jump and keep the Hawkeyes nationally relevant following Luka Garza's departure to the NBA. Well, Murray certainly did and it may even help him crack the top five in NBA Draft. In Iowa's uptempo offense, Murray was the headliner as he averaged 23.5 PPG and shot nearly 40% from three-point range – which came after averaging just 7.2 points and 18 minutes per game as a freshman. Though a late-bloomer, the soon-to-be 22-year-old can be a 3-and-D wing right away in the pros and guard multiple positions while offering proven scoring skills. To get a better idea of Murray's improvement from year-to-year, here's his stats comparison.

Stop me if you heard this before: a college basketball player will now be an NBA lottery pick after making a big leap from his freshman to sophomore season. Yep, Bennedict Mathurin joins the likes of Jaden Ivey, Keegan Murray, and Johnny Davis as some of the breakout college hoops prospects who improved their game with another year at school. As for Mathurin, he became a legit three-point threat with the athleticism and handle to be a playmaking guard at the next level. At the very least, the former Arizona star will be a solid defender and perimeter-scoring role player with the upside for more. Plus, this dunk from the NCAA Tournament shows Mathurin won’t back down from the opportunity to posterize NBA bigs.

If not for Chet Holmgren, we'd be talking about Jalen Duren as the best rim-protector in this draft. He's an explosive and athletic shot blocker who can add a defensive presence in the paint right away for an NBA team. Plus, Duren's top-tier dunking ability and above-the-rim playstyle should make him popular among those highlight-driven fans and GMs. The big knock on Duren's game is that he offers basically no three-point upside after he only attempted one deep ball (and missed it) in his freshman season at Memphis. Still, his elite shot-blocking and interior scoring means he can make up for the lack of perimeter shooting. After watching his highlights from last season, it's easy to imagine this dude slamming down alley-oops and ferociously blocking shots on a nightly basis in the NBA.

It's not often we see a senior in college basketball be a top 10 NBA Draft prospect, but Agbaji deserves to be in that conversation. The Big 12 Player of the Year just completed a stellar fourth season at Kansas that saw him win a National Championship and NCAA Tournament MOP honors as a consensus All-American. It doesn't get much better in terms of capping off a collegiate career. Now, Agbaji will be ready to impact an NBA team right away as a veteran-minded rookie with plenty of big-game experience. He showed improvement as a three-point shooter and a pure scorer through his four years at Kansas and has the ability to guard multiple positions in a 3-and-D role. To get a better understanding of Agbaji's development in college, check out his year-by-year breakdown below. The improvements in three-point and field-goal rates are especially encouraging when you consider he became the team's top scoring option as a senior.