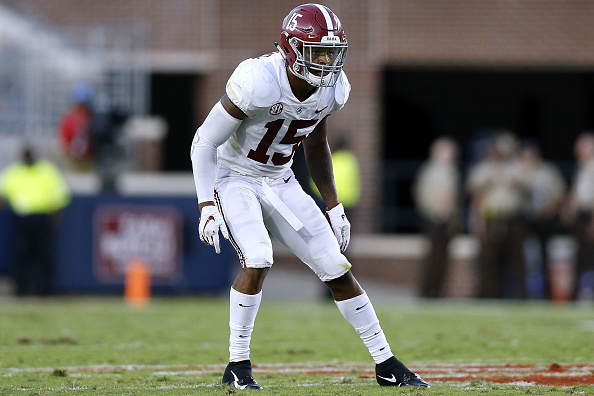 One more article to come after this week’s piece covering rookie safeties that potentially will have an impact in fantasy this coming season. The six young defensive backs profiled below have varying degrees of prospective influence on fantasy team production when the season takes hold. Of the two classes of defensive backs available for fantasy leagues safeties are a better overall choice, at least in leagues that are not cornerback mandatory in their roster requirements, as the safety position generally provides steady point productions week in, week out, not relying so heavily on big-play explosions to created value. Not that rookie cornerbacks do not have their place, as we will discuss next week.

Winfield’s pedigree is strong, with his father having played in the NFL for the Buffalo and Minnesota franchises over an illustrious 14-year career, albeit as a cornerback. The son will at least initially suit up as a safety for the Buccaneers, as his new team is deep at corner currently. He will settle in as a free safety, playing the deep part of the field, although he is an able tackler when called upon (83 total tackles (TT) with the Golden Gophers in his 2019 season, along with a trio of sacks). He is a definite ballhawk DB, so he will have value in big-play formats. Despite his size, he should also contribute a fair share of tackles, and as a likely starter for Tampa Bay, has immediate fantasy relevance this season.

The Browns grabbed the 2019 Thorpe Award winner (best defensive back) in the second round of this year’s draft, and he, like the player profiled directly above, has a great shot to start the season seeing plenty of defensive snaps. Also, like Winfield, he profiles as a coverage-type safety, although his tackling skills are not as developed as the rookie first discussed this week-in fact, his ability to wrap up ballcarriers is bordering on awful. He will need some patient coaching to improve that aspect of his game. He certainly does not lack for the skills to cover the slot or go deeper on post patterns. The Browns were desperate to shore up their safety depth, and found it in the LSU product, but do have some work to turn him into a complete player.

Unlike the first two safeties profiled here, McKinney is extraordinarily versatile as a defender. He was equally adept at playing in the box for ‘Bama, as he was dropping back into coverage. With Jabrill Peppers locked in at strong safety in the Giant defensive backfield, he will begin his career as a free safety that will be asked to play in a wide variety of roles. He will provide excellent value in both tackle-oriented and big-play IDP formats for his fantasy owners, and will see significant playing time from the git-go. He certainly has the potential to become the best safety selected among those drafted this year.

Yet another second round pick in the 2020 draft, this small-school prospect improved his NFL-value with a strong Senior Bowl performance. With Eric Reid gone from the Panthers this season, he has an excellent opportunity to step in immediately at the safety position in Carolina. He has good size, and may shift between safety and cover linebacker on defense. His tackling skills are unquestioned, and with his elite speed, he should find a home in the Panther defensive backfield sooner than later.

Dugger is another college player selected in the second round of the draft, this time with the 37th pick by the Patriots. The current starting strong safety in New England is Patrick Chung , who at 33-years of age, does not exactly fit into the rebuild that will take place in Foxborough going forward. When Dugger begins his time patrolling the middle of the defensive backfield for the Pats, he profiles as 70-75 TT performer, and will be valued in tackle-oriented IDP formats.

The Jets snagged a deep-third cover safety in the Cal product, and Davis also can provide slot coverage in the backfield. The knocks on him are his relative lack of football experience, and a sub-par tackling ability. He did have a groin injury that kept him from showing his skills at the combine, but he does have exceptional speed (he walked onto Cal’s track team before joining the football squad as a redshirt in 2015). This is a big-play safety for fantasy purposes only. For 2020, his role will likely be as the third safety in the dime-coverages employed by the Jets on defense, which renders his value as limited for the immediate future, except in big-play leagues where his value improves as a cover DB.

As noted above, the schedule is to discuss rookie corners next article in this series. Safeties commonly provide better numbers as a group than corners for most fantasy setups, as they collect tackles regularly. For the most part, big-plays are not their forte, although sacks and fumbles, both forced and recovered, are always a possibility. As a rule of thumb, however, the value in drafting a safety in an IDP league comes via that tackle statistics. The players discussed in this series examining rookie IDPs should generally be targeted in your dynasty IDP leagues, though, as they will provide value going forward as they develop into NFL veterans (barring injury). Unless they are stepping into a starting role, of course, and some of those discussed above certainly have that promise.