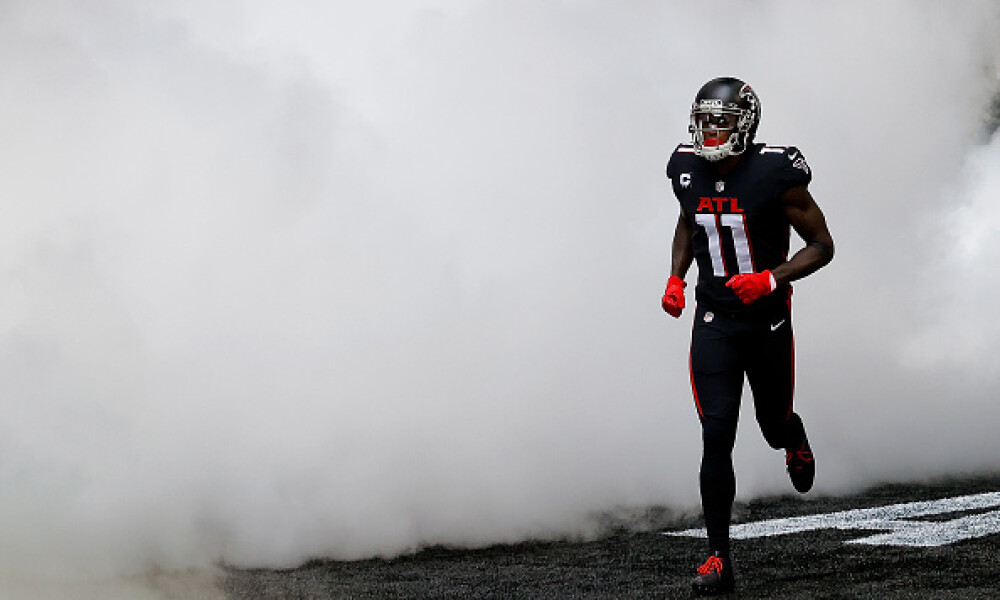 Without a doubt the biggest winner here is Kyle Pitts. We have told you time and time again that the number of most important thing in terms of upside for tight ends in fantasy football is being a top two target on your team. With the exit of Julio Jones , Pitts now has a chance to be the second target behind Calvin Ridley in a high volume passing attack.  Not only that but Julio Jones was the split end.  The other wide receivers on the team outside of Ridley are guys like Russell Gage who is a primary slot guy and Olamide Zaccheaus who is 5’8”.  This opens the door for Kyle Pitts to play more split end and line up out wide (presumably with Hayden Hurst in an in-line blocking role).  Kyle Pitts is 6’6” and essentially runs the same 40 time as Justin Jefferson so he immediately has top five upside as a tight end.

This one doesn’t take a whole lot of explaining.  Tannehill just got a surefire hall of famer to line up at split end opposite of AJ Brown.  With his sneaky rushing upside, Tannehill is now looking pretty good to finish as a QB1 again this year after finishing as the QB7 last year.  Per Pro Football Focus, he was the 3rd most accurate QB on throws of 20+ yards with a near 50% completion percentage while tracking down deep balls is Julio Jones ’s specialty.

It’s hard to determine how this one will shake out but there is no question there will be more targets available in Atlanta now.  The safest play would be Russell Gage as last year he primarily played slot but did move into more two WR sets when Julio Jones was out.  For instance, In week 5 when Julio was healthy Gage played 39 snaps in the slot and only 1 out wide but in week 14 when Julio was out, Gage played 9 snaps in the slot and 31 out wide.  That said, in all likelihood we will see a lot of Pitts and Ridley as the outside guys with Gage in the slot.  In deeper leagues, there will be a competition for third wide receiver between guys like Olamide Zaccheaus, Christian Blake , and Cordarelle Patterson (though Patterson may primarily be a return specialist).  As we mentioned above, this actually brings Hayden Hurst back into the fold a bit though it would likely need to be deeper two tight end or tight end premium leagues for him to be relevant.   And, if you are in a really deep league, it might not be crazy to take a stab on Tajae Sharpe .  They quietly added him when these trade rumors started to heat up and, if Gage is in the slot with Pitts at tight end, who is more likely to play split end - the 5’8” Olamide Zaccheaus or the 6’2” Tajae Sharpe ?

These guys take the hardest hit on this one.  We talk about how being a top two target on the team is huge for fantasy success and, after AJ Brown, things were wide open for Reynolds at split end or Anthony Firsker at tight end or in the slot.  Now there is no question - the top two guys are Julio Jones and AJ Brown.  The Falcons are a high passing offense and even they didn’t throw enough for Hayden Hurst or Russell Gage to be relevant.  And that’s with Julio missing half the season last year.  The rest of the pass attack options on the Titans just had the rug pulled out pretty hard from under them. Which is disappointing because we were really start to buy into the Anthony Firkser hype.

This one is obvious as well but has to be said.  I don’t care how good Kyle Pitts is - Julio Jones and Matt Ryan have been playing together for nearly a decade.  You can’t just plug another guy in there and have it be the same.  There was an outside shot that Julio could have hung around and Ryan would have had all three of Julio, Ridley, and Pitts.  He definitely takes a bit of a ding losing one of the best wide receivers of the decade.

People are going to try to tell you that this doesn’t affect the values of one or both of the receivers.  It does.  This Titans team is not a pass happy attack - it doesn’t want to be, as Mike Vrabel’s mask will tell you.

Mask Up. Titan Up. ???? pic.twitter.com/c8zwYQUmfi

We have to remember that the real life NFL does not care about fantasy football.  If they did, they wouldn’t schedule bye weeks in week 14.  The Titans care about winning more games, not about the individual stats of the players.  With the amount of times this team throws, there is no question that Julio should get less targets than he would have gotten on the Falcons and that AJ Brown will get less targets than he would have gotten without Julio there.  Both players should still be good fantasy assets, don’t get me wrong, but they are less valuable today than they were yesterday.