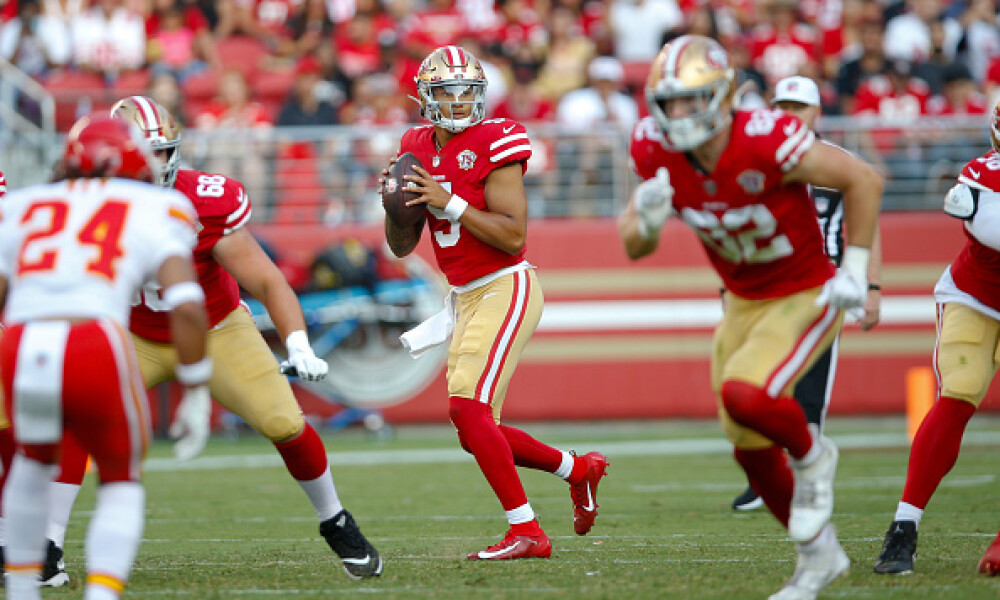 2020 sucked for everyone, but it really sucked for us 49ers fans. Fresh off a Super Bowl let down in February, the fanbase was rabid for the season to start. It all unraveled with one trip to New York where two games were played. One player after another was injured in those two games and the hope of the season spiraled like a flushed toilet. The team still managed to win six games somehow and we found we had a budding star in Brandon Aiyuk. What will 2021 bring for the San Francisco 49ers and fantasy football? Let’s take a look.

The bad record and a trade with the Dolphins landed us the number three pick in the draft in which we selected the quarterback of the future thanks to Garoppolo’s inability to stay healthy. Trey Lance is the new “Bae by the Bay” and is hopefully ridiculously good. However, I hate to burst your bubble, but he isn’t starting Week 1. He probably isn’t starting Week 5 or Week 6 if Jimmy Garoppolo is healthy. Dude played one game last year and went to a small school. Management isn’t going to put him under center for a team with championship aspirations from the start. In redraft leagues I am not taking him, but in dynasty he is a must-draft. For superflex leagues I have no problem with him as your third quarterback. As for Garoppolo, he isn’t as bad as the internet would have you believe. However, the team didn’t trade up to the third pick to not grab the quarterback they are going to ride or die with. So, barring spectacular play, the handsomest quarterback in the NFL is going to get replaced at some point this season. Draft him accordingly, which means don’t do it unless it is superflex and you handcuff him with Lance.

The People’s Tight End George Kittle will be back and better than ever. Not only is the guy probably the nicest guy in the NFL, he is also a lot of fun and more importantly an elite talent on the football field. Kittle is as good at blocking as he is catching the ball, which I know there are no points for, but it means he never leaves the field. He is deceptively fast for a guy his size and he is a tank to take down once he is in open space. He is easily in that top three at tight end and arguably could be second.

There is good news and bad news about the running backs. The good news is the 49ers run the ball more often and more effective than almost any other team in football. The bad news is that there isn’t a set back who will get the majority of the work. The injury to Jeff Wilson helped some, but the team used a high draft pick on Trey Sermon and Raheem Mostert is still there. They also picked up Wayne Gallman in the offseason and drafted Elijah Mitchell. Mostert and Sermon will be the two guys to own heading into the season, and we will see if and when Wilson is able to return. Sermon should have a pass catching role right away as that is not Mostert’s strong suit, but Mostert should get a majority of the carries. I like both guys at their ADP’s but if I had to choose one it would be Sermon in PPR leagues.

When it comes to the wide receivers there are really just two guys to talk about. You know them: Brandon Aiyuk and Deebo Samuel. In his rookie season Aiyuk showed the ability to do a lot of damage after the catch on short grabs, but he also proved that he can get deep on a defense and make a big play. I feel like he is still scratching the surface of his abilities. Deebo excels at what Kyle Shanahan loves to draw up. Bubble screens, slant passes, and other gadget plays where he has the ball in space. He has very reliable hands and is a bull to try to tackle in open space. He often breaks the first tackle or carries defenders with him for three-to-four additional yards after contact. Both have fairly similar ADP’s, and you can’t go wrong with either. Samuel has had a few injury concerns in his career, but who hasn’t? Keep the name Richie James in the back of your mind. If Samuel or Aiyuk were to get injured, James should slide right into a starting spot. He had a couple of great games when the entire team was hurt, and James showed some splashy ability. He isn’t someone to draft (unless maybe in a deep best ball), but during the season if things break wrong for the Niners, James could be a force.

And since this is a fantasy article, we have to include kickers and defense, and the Niners rock out at both. Robbie Gould is consistent as a kicker, and with this offense he should get plenty of opportunities.  Of course, this hopefully leads to more PAT’s than field goals from a fan’s perspective, but either way Gould can help you out. Is he a top five kicker? He is not. However, if you are in the seventh-to-ninth range in kickers, Gould is one of the better options out there. The defense can be sick when healthy. The corners aren’t awesome, but the front seven are just monstrous. Nick Bosa, Arik Armstead, Dee Ford, and Javon Kinlaw can all ruin a quarterback’s day. Fred Warner is one of the baddest linebackers in the league. For those of you in IDP leagues he should be an early pick. In the secondary, Jaquiski Tartt is a tight end destroyer. When your favorite tight end plays the 49ers, you might want to put him on the bench that week.

As you can tell I am TOTALLY PUMPED for this NFL season not only for everything we do at Fantasy Alarm, but for the 49ers season. Last year was a complete buzzkill but I just have to think it led us to a great new quarterback of the future and all of us fans will appreciate winning this season even more after the disappointment of 2020. So, everyone say it with me now, LET’S GO NINERS!!!!