Coop’s Corner: Get Them On the Field 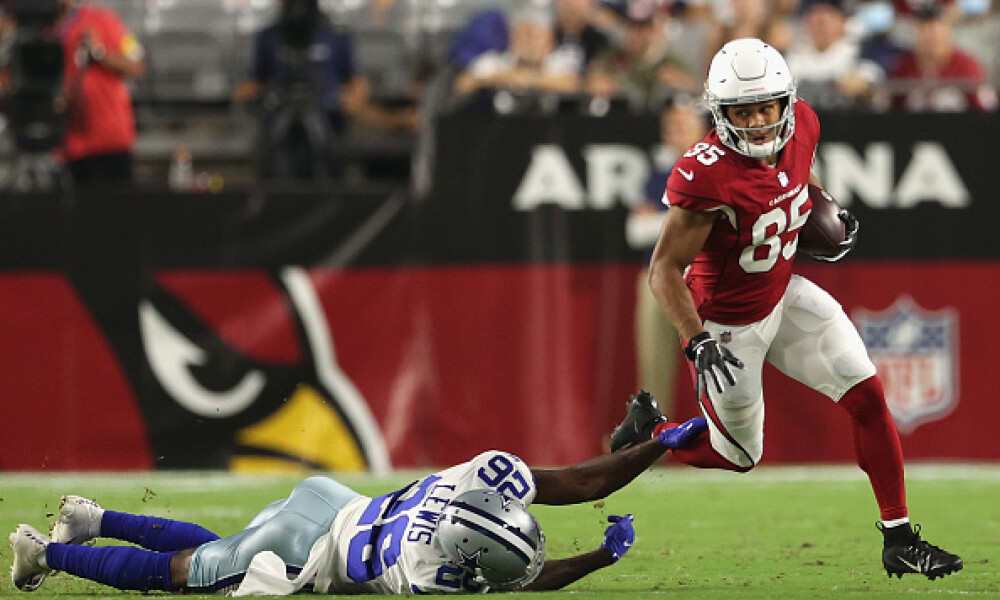 If you’ll humor me for a moment, think of these fantasy football players as machines. Some of them are
highly efficient like Christian McCaffrey and others are less efficient like Jalen Guyton.  No matter how
much usage the Guyton machine gets in terms of playing time, you aren’t getting a whole lot out of it (last year Guyton played 920 snaps and only caught 28 passes). In that regard, it’s pretty obvious which type of
machines you want on your team.

Let’s take a second to think about how these hypothetical machines work. The basic input is snaps -
there is no production without snaps. From there you earn targets and carries then, via receptions,
yards, touchdowns etc. the output is fantasy points. Now, what if we were to look at some of the most
efficient machines and consider what the output might be if they had an increase in snaps? If we were to
do that, we might be able to stop this weird machine analogy and start identifying potential breakouts for
fantasy football.

In 2016, rookie Tyreek Hill was playing less than 20% of the snaps for the first three games. In fact, in
that rookie season, he never eclipsed 68% of the offensive snaps in any game and was often well below
50%. But he kept making explosive plays - he ran back two punts and a kick, reeled in deep passes,
had massive gains on end-arounds etc. But throughout that he he never surpassed 100 yards receiving
because he simply wasn’t playing enough.

When you step back and look at some of his efficiency metrics, it was clear this was an efficient
machine. For instance, his 2.28 yards per route run as a rookie in 2016 was the same as Mike Evans
and slightly better than Odell Beckham Jr. (2.27) and Antonio Brown (2.26). In the coming years, more
snaps were added to the Tyreek Machine and the result is the breakout player we have now. Anyone
who saw that going into 2017 was able to get him for a bargain.

So, with all that in mind, let’s take a minute to look at some stats from the first couple weeks and see if
we can potentially predict a breakout either by the end of the year or for the coming years.

The Stats: This should be the first player on everyone’s mind. Rondale Moore is basically a firework; it’s
hard to imagine that something that small is explosive enough to rip your face off. We just talked about
yards per route run and how anything over 2 is basically amazing - Moore’s is currently an absurd 4.82
yards. Of players with 10+ targets, only Deebo Samuel’s is higher. Moore also leads the league in
YAC/REC with 14.3 yards while Deebo is next at 10.5. No one else is higher than 10. Is it sustainable at
that pace? Probably not. But he’s shown he’s insanely quick and, even though those efficiency numbers
would probably come down with more snaps and targets, the overall output would certainly go up.

The Problem: There is always a problem for these guys to overcome - otherwise, they’d be playing a
bunch of snaps wouldn’t they? In Moore’s case his size is a part of it. Football requires you to have
seven guys tethered to the line of scrimmage. And, in real football, not fantasy land where we live,
blocking is important. DeAndre Hopkins and Christian Kirk have been playing but folks are calling for AJ
Green’s snaps to be replaced by Rondale Moore’s. But here’s the thing: AJ Green is 6’4” and Rondale
Moore is 5’7”. They don’t even play the same position as AJ Green has been fairly exclusively been
playing split end and Moore has mostly been playing slot. So, to take Green out of the game for Moore,
you basically need to move one of Christian Kirk or DeAndre Hopkins to that tethered split end position
and use Max Williams at tight end with three WR sets. Not only would this hurt one of Kirk or Hopkins
but you are also going to have to deal with the consequences of Rondale Moore run blocking over AJ
Green. Moore has graded out as one of the worst run blockers in the league so far and, on his one big
chance to block for Kyler Murray week 1, he got a holding penalty. All those problems aside, his
explosiveness thus far has left Rondale owners BEGGING to see him out there.

The Stats: Another player that has certainly passed the “eye test”, Swift also has some encouraging
numbers. On the ground his overall yards per carry doesn’t blow you away but he has a breakaway run
rate of ~40% meaning that four of every ten carries he has goes for 10+ yards. Through the air his 11.1
yards per reception is on par with Christian McCaffrey (10.1) with a big chunk of that coming on an
impressive 43 yard touchdown catch week 1. As this article alludes to however, he has so far split
carries (16 to 19) and receptions (12 to 11) with Jamaal Williams.

The Problem: And of course that’s the problem. Jamaal Williams is just a solid back. GM Brad Hunt
has set this team up for a bridge year by doing exactly what the Miami Dolphins did in 2019: trade the
QB, let vets leave for comp picks, carry the most dead cap in the league while also having the least
active spending to roll money to next year etc. The max comp picks is four and they let five players
leave so they could sign one incoming player without messing up that formula - they chose Jamaal
Williams. Brad Hunt was the head scout for the Rams when they won four games while running Todd
Gurley into the ground so he’s seen the negative effects of that and the team doesn’t have much
incentive to give all the carries to one player in a year they clearly aren’t winning anything. That leaves
Brad Hunt and Dan Campbell with a tough decision on whether to give the fans what they want now or
do their best to keep tread on Swift’s tires for the future.

The Stats: Before we get to the stats with this player, the narrative is important. Juwan Johnson is a
wide receiver who converted to tight end and is now eligible for TE spots in fantasy. That’s basically the
Darren Waller story. With Jared Cook gone, a passing role has opened up - we thought it would be
Adam Trautman’s for the taking but Trautman has taken on more of an in-line blocking role thus far.
Though Trautman has played 74 snaps to only 30 for Johnson, Trautman has only run 29 routes while
Johnson has run 26. And in week 2, Johnson actually ran more routes than Trautman. On only 12
snaps in week one, Juwan managed to score two touchdowns and had another end zone target that
didn’t end up in the box score because of a penalty. Promising, to say the least.

The Problem: There are really two problems here. One, is obvious - Adam Trautman. It would be great
if they would just use Adam Trautman as the in-line tight end and Juwan Johnson as the slot/WR tight
end like the Falcons are doing with Hayden Hurst and Kyle Pitts or the Ravens do with Nick Boyle and
Mark Andrews but they haven’t been doing that. The other problem is time. Not only will Tre’Quan
Smith be back soon but the dominant Michael Thomas will eventually return as well. If Juwan is going to
carve out more snaps and a bigger role for himself, he needs to ramp that up immediately.

The Stats: Talk about all the stats you look for. Yards per route run of 2.35? Elite. Yards per reception
of 13.9? Fantastic. Passer rating when targeted of 146.5? Insane. Catch rate of 100%? Unsustainably
good. What’s not to like?

The Problem: This team already had two amazing pass catchers in Adam Thielen and Justin Jefferson.
And neither comes off the field - last week Adam Theilen ran a route on 35 of 35 pass plays and
Jefferson on 34 of 35. The problem here is that this team likes to use a fullback in CJ Ham at times and
they also like to run two tight end sets at times. For now they are running a lot of three WR sets and it’s
working. But beware that any time a fullback comes into the game, it’s Osborn who comes out (25 snaps
for Ham last week). And they traded for Chris Herndon so, as he gets up to speed, we may see more
sets with both Tyler Conklin and Herndon. That’s why Osborn only played 36 of 61 snaps and only ran
24 routes which is two thirds of what the other guys ran. I know, it’s not fair.

The Stats: Tony Pollard has been electric thus far through two games. In fact, he’s scored more fantasy
points than the starter Ezekiel Elliott. He’s been the top graded running back so far this season per Pro Football Focus and he also leads the league in yards per attempt (7.7). He has a 54.5% breakaway run rate which is even better than Swift and he’s caught all seven of his targets this year with a 3.00 yards per route run. A lot of people out there are calling for him to be the starting running back OVER Zeke Elliott.

The Problem: While the explosive things you do with the football are very important to the running back
position, that’s not the entire job. And Pollard has struggled in a couple other phases of the job which has
prevented him from seeing more snaps. One obvious one is pass blocking. He graded out poorly in it
last season and so far this season he’s off to a bad start again. On only four pass blocking snaps he’s
allowed a sack and he’s committed a penalty. Not great Bob. The other place he hasn’t been amazing
is short yardage. Last year only Phillip Lindsay have more plays go for zero or negative yards - 24% of
Pollard’s carries last year were stuffed. If anyone watched the pass blocking efforts by Zeke in the
Buccaneers game or the way he can still move the pile to get one yard when needed, they would
understand why the full job isn’t likely going to Tony Pollard any time soon. At best it will be a committee
backfield but, given the way Pollard is playing, he’s likely still worth a flex even with the split.