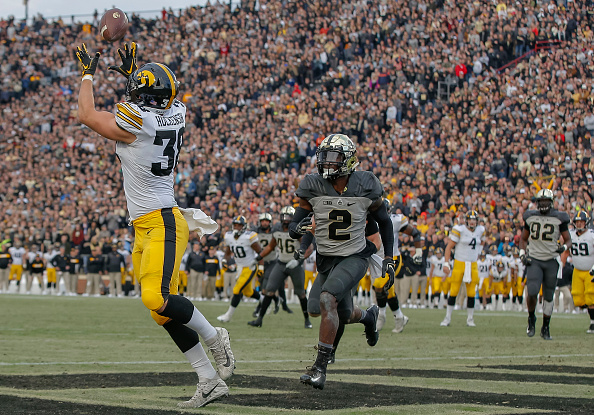 It's draft week baby! And if you couldn't tell, this will be the last position group scouting report that will be delivered to you fantasy football nerds. For a comprehensive look back, here are the other position groups we have covered... (QB, RB, WR) After you get your fill on these tight ends, Wednesday morning, enjoy your AM cup of coffee with Dom Murtha's first round mock draft. That should lead you right into our Thursday draft coverage with pick-by-pick analysis by NostraDomUs on the website and Howard Bender live from ground zero in Nashville, Tennessee.

Without question, Hockenson is the best tight end in this class. Quite frankly, he’s the best tight end to enter the league in a long time. It’s kind of funny, really, because when you think about it, entering the draft process, the thought was that he wasn’t even the best tight end on his own team, let alone the best in the class. To explain Hockenson is to describe a tight end prospect who not only has very few flaws, but is also as nasty as they come. Watch his tape to the song “Let the Bodies Hit the Floor” by Drowning Pool and you’ll understand what I mean – in an almost frightening way, it will match up perfectly.

As a blocker, Hockenson brings Gronk-level strength, instincts, and intensity, while as a receiver he reminds one of Jeremy Shockey as a lad. On tape, he looks like a kid who loves football, and more importantly, putting guys on their backs. I say confidently and boldly that Hockenson is the best offensive player in this draft.

Headed into the draft process, Fant was considered the top tight end in the class, but since he has been firmly surpassed by his teammate T.J. Hockenson and is now closer to guys like Irv Smith and Jace Sternberger. It is not that he is showing a lack of potential suddenly, but rather because Fant appears to be more of a one trick pony.

That one trick is as a mismatch receiving option.

You’re probably thinking to yourself “that’s a pretty good trick to have as a tight end” which is why Fant is rated so highly.

Essentially, Fant has a ways to come as a blocker or even as an inline player, however his potential as a receiving threat and red zone terror is immense. In the NFL, with his elite athleticism for the position, Fant can be used as a slot, an h-back, a wing, or a tight. He’s position versatile and a natural receiver. He will hold plenty of fantasy value going forward.

Smith is a talented athlete who is yet the sum of his tight end parts. While slightly undersized in terms of height, Smith has plenty of body armor on his frame to make him an intimidating force on the field. With the lack of height combined with plus athleticism, Smith was mostly utilized at Alabama as the team’s “move” tight end. At the next level, I expect him to have a similar role to Chris Cooley during his years with the Redskins… Used as a wing, h-back, slot, tight end, fullback, etc. Smith will be one of the best players of this talented position group when his NFL career is all said and done. To think that he still has a lot of potential in his game that is still unfulfilled is scary.

Are you a fan of sushi?

If you are into raw delicacies, Kahale Warring may be just your type.

He’s big, strong, pretty fast, and is a former basketball player. The only problem is that he only started playing football a few years ago and at times it shows up on tape. To be frank, Warring is likely going to have to essentially take a redshirt year in 2019, as his football IQ is just not up to speed yet to play at the NFL level. Rumor has it that when he got to San Diego State he had to look up what the term “Tight End” meant. Despite his rawness, Warring shows athletic potential to eventually turn into a productive NFL starter. Through his background as a basketball player, Warring should bring a physical dynamic that many other successful NFL tight ends have over the last decade or so; most notably Jimmy Graham and Antonio Gates .

Sternberger is a guy who, at the next level, is likely going to have to be utilized in matchup specific situations. The reason is because while featuring a tight end build, Sternberger is far more finesse than braun. While his blocking is adequate at the collegiate level, he likely is going to struggle at the next level against NFL play strength. With all of this being said, Sternberger offers a lot of upside as a receiver as he can use his athletic gifts to beat safeties and linebackers deep. Serving as a move tight end, Sternberger figures to have a Nick O’Leary type of role as a rookie, potentially developing into more as he becomes a better route runner and a more impactful blocker.

While there was plenty of tape to watch on Knox, there wasn’t much production to go along with it. Much of that can be attributed to the fact that he was the third or fourth option in Ole Miss’ offense, playing behind two other receivers that are likely to be drafted in the first round of this year’s draft. However much of that can also be attributed to the fact that Knox tends to play a bit timidly as a receiver. On routes where he is expected to be featured deep, Knox explodes off the line of scrimmage, running deep with purpose. It is on these reps that he looks every bit of a future NFL starter. However, on routes where he is the safety valve, Knox tends to round off his routes and looks surprised when the ball is thrown his way. He will at times fail to break back to the football and will also drop some easy passes. This seems to be a fatal flaw for his future in the NFL, but when you see the flashes of good with Knox you then understand his NFL hype. I believe he can be coached up and has starting potential as a pro.

As a blocker, again, he appears inconsistent. Sometimes he’s great and sometimes he whiffs. I love his natural instincts in pass protection, while he has a ways to go as a lead blocker. Again, this can be coached.

Draft Knox in the third or fourth round and allow him to be used as a rotational tight end early on. Once he gets the hang of the NFL game, he will be a starter down the line.

Moreau is a throwback of sorts, as he is a tight end who is little concerned with his receiving skills. Moreau wants to beat up the guy in front of him in the run game, while he is also proven at protecting his quarterback in pass pro. While it is tough to tell on tape, Moreau is actually a plus athlete for the position, and he proved it at the NFL Combine this past February. For these reasons, James Hanna seemed like the best comparison, as they are the same size, are both very underrated athletes for the position, and are almost unparalleled in the blocking department. Moreau will play inline or as a fullback in the NFL.

Sample is a well built tight end, one who will likely be considered a “blocking” tight end by most scouts, but make no mistake, his tape shows a well-rounded skill-set. While creating running lanes and holding his blocks until the whistle blows is his calling card, Sample also is known for getting a clean release off the line of scrimmage, running a tough crossing route, and reliably hauling in the contested catch. His potential is not as high as some of these other tight ends in this class, but Sample should have a long career as a part of a rock solid tight end stable.

Pronounced “not-a” – Nauta’s Combine performance would indicate that he’s Nauta great athlete (admittedly stole that line from The Athletic’s Dane Brugler). Elite athleticism is not exactly a prerequisite to play tight end in the NFL, but you at least have to prove that you can run faster than the offensive tackle playing inside of you. Unfortunately, according to Nauta’s 40-time, that is not likely going to be the case. Because of this, despite some rock solid tape that would have seen him go on Day 2 is actually going to bump him to Day 3. An NFL team will likely get a steal towards the end of the draft.

Smith reminds a lot of former teammate Dalton Schultz , who will likely have a decently long career in the NFL, but will also struggle to ever become a starter. At the very least, Smith’s high effort and toughness will allow him to serve on special teams for a handful of years, while eventually his speed and athleticism will match his sure hands and physicality at the catch point.