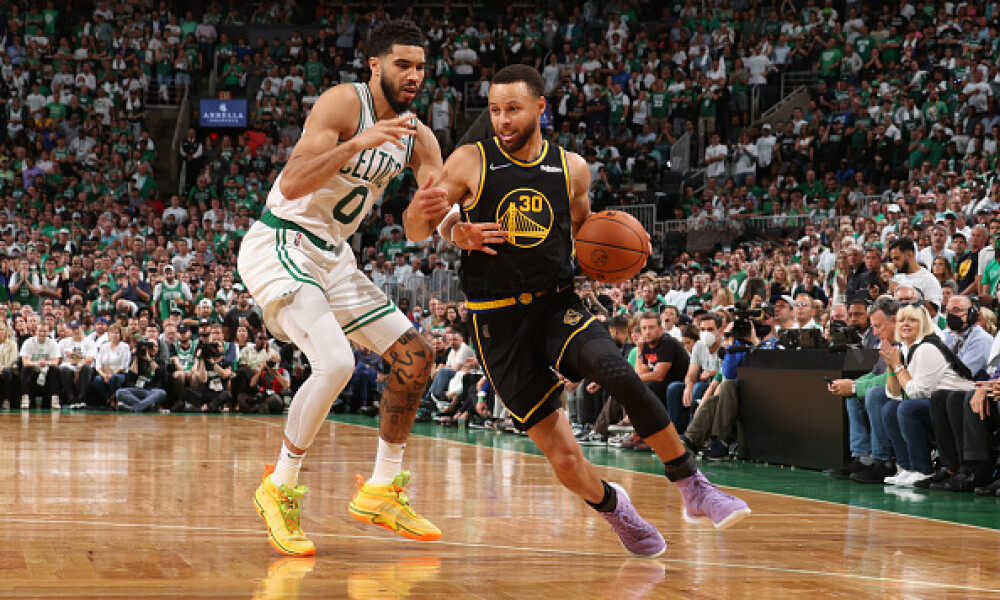 The 2022 NBA Finals has become a best-of-three series with the Golden State Warriors and Boston Celtics tied at two games apiece ahead of tonight's Game 5 matchup. If you're building NBA DFS lineups for Monday night's game, let's review a few things to know before the action gets underway. The Warriors have the home-court advantage with this Game 5 taking place at the Chase Center in San Francisco. The Warriors are 3.5-point favorites with a 211.5 total as of this writing. Stephen Curry is coming off a dominant performance last game with his 43 points and 10 rebounds. Look for him to stay hot for the Warriors while Jayson Tatum headlines Boston's offense. Both Curry and Tatum are among the top MVP/Captain options for NBA DFS lineups tonight. You can build NBA daily fantasy lineups on DraftKings, FanDuel, or Yahoo Fantasy tonight. Before you build daily fantasy basketball lineups, check out the latest NBA player news, NBA daily projections, the latest NBA Vegas odds, and more of DFS Alarm's NBA tools. Here are the NBA DFS top picks and daily fantasy core plays for the 2022 NBA Finals Game 5 on Monday, June 13th.

The Celtics haven’t found a way to contain Stephen Curry, who scored 43 points in Game 4 after suffering a foot injury at the end of the previous contest. Boston will need Jayson Tatum to shoot better tonight to get the win and give itself the chance to win this series at home in Game 6. One reason Curry continues to succeed is that he’s not fully camping out at the arc. Rather, he’s forcing himself to take the ball inside and it led to nine free throw attempts last game. The Warriors have done well inside the arc because of Curry’s driving and Andrew Wiggins' mid-range play. Golden State elected to mess with their starting lineup last game by bringing Kevon Looney in off the bench and starting Otto Porter Jr to get more offense in their lineup. It’ll be a very tight basketball game with the Warriors slightly favored. It was encouraging seeing Robert Williams play over 30 minutes last game and he’s been a key defender for the Celtics. Now let's get into some NBA DFS top plays for tonight's matchup.

Stephen Curry continues to be the Warriors' most reliable scorer and he’s scored no fewer than 29 points in any game in this series. He’s taken 21-plus shots in each game and has actually shot over 53% from the floor in both of the last two contests. Curry has also shot at least 50% from the arc in three of these games versus Boston. It’s been excellent seeing Curry balance his offense between long-range shooting and attacking the basket. He hit nine free throws last game and continues to drive the lane. The Warriors don’t have reliable interior offense, so Curry driving gets Boston’s defense to collapse in the lane leaving certain players on the arc open. He hasn’t been dishing many assists because he’s not getting enough help from his teammates on the offensive end, but Curry continues to carry the Warriors on his back to propel them in this series. He is coming off of a 10-rebound game and has pulled down five or more boards in three of four games in the Finals. Curry has also posted three multi-steal games in this series.

Despite Jayson Tatum’s shooting issues, he’s taken 23 shots in both of his last two outings. He shot better from beyond the arc last game, but Tatum has yet to shoot 43% from the field in this series. He hit at least 50 percent of his threes for the second time this series and we saw him pull down 11 rebounds last game. Tatum has been very helpful defensively. He’s stolen the ball in every game in the finals and he turned away three shots last game. He’ll continue to play 40-plus minutes, and we will continue seeing him be a facilitator on offense to keep the ball moving. He’s dropped six or more dimes in three of four games. He has no leash when it comes to shooting, but we need to see Tatum get high-percentage shots and that will involve him working the post more and drawing contact. He needs to get to the free-throw line and force the Warriors' defense to line up on the low block more.

Andrew Wiggins has been very reliable in this series as he continues to score in double figures and take a lot of shots. He’s taken 16 or more in both of his last two outings. Wiggins has been getting screened at the arc and curling around and getting open at the elbow. He pulled down 16 boards last game and he’s stolen the ball in all but one game in this series. Wiggins has shot over 41 percent from the floor in three of four games and he has recognized that he has to find another way to score when the three-pointers aren’t falling. The Celtics put a lot of players up at the top and Wiggins is able to get open looks from closer in. He’s struggled shooting from beyond the arc, though. Still, Wiggins will need to get to the basket more especially if Draymond Green is frozen out near the arc. He's even blocked multiple shots in two of four contests.

Jaylen Brown hit the 20-point mark in scoring last game for the third time this series. He’s shot under 43 percent just one time in the Finals, but he’s been very up and down with his three-point shooting. Brown has started off strong in the last few matchups, but we’ve seen his production drop off a bit as the game goes on. Brown has grabbed six or more boards in every game and he’s even dropped a few dimes more often than not in this series. Brown plays heavy minutes and he’s taken 16 or more shots in every game, but he doesn’t draw a lot of contact. Throughout the playoffs, Brown would attack the rim from the side of the basket and have a narrow but open path to the basket. The Warriors' rotations on defense have cut off his lane, and when that happens, Brown for his next handful of possessions he’s involved in will look specifically for long or mid-range jumpers. Brown has even produced blocks and/or steals in two of four games against the Warriors.

Marcus Smart's shot attempts have increased since the series shifted to Boston and he needs to continue to take the ball to the basket more. His long-range shooting has been all over the place, but he’s scored 18-plus points in three of his last four outings. He’s even dished five dimes in each of his last three contests. This year's NBA Defensive Player Of The Year is also coming off of a four-steal game and he’s posted steals in all but one contest in this series. Smart is quick and feisty but needs to force himself in the paint as the Warriors continue to look to keep him at the arc. Unfortunately, if the shot clock winds down to five seconds or fewer, the chances increase that Smart hoists up a shot with hands in his face. He will continue to have a lot of time with the ball and he’ll play 35-40 minutes. Smart has pulled down four or more rebounds in three of four games as well.

Robert Williams recorded double-digit rebounds for the second straight game and even from watching him move up and down the court, he is moving a bit quicker. Don’t get fooled by the questionable tag that he still continues to carry around – he'll be out there tonight. Williams is the Celtics' main defender and he’s blocked two or more shots in every game this series and even recorded a steal in every game except for the one in which he logged just 14 minutes. Williams doesn’t get a lot of plays called for him on offense, but he continues to have so much success defensively that the Celtics rewarded him with 31 minutes of action last game. Williams can hit baby jumpers, but the Warriors are able to get to him unless he gets the ball on transition. Williams has been excellent at shifting his body around the paint and he’s been turning away shots as Golden State drives to the lane. He should once again play 27-32 minutes tonight.

Derrick White hasn’t been shooting well from the field, but he’s been doing what Marcus Smart needs to do more of – and that’s taking the ball to the rack. We saw White shoot five free throws last game as a result. White has taken 11 or more shots in three of four battles in this series. He’s recorded steals in his last three battles and blocked shots in two of those games. White continues to fight through screens and play very aggressive defense. A lot of White’s production will hinge on scoring and steals, but he did grab over three boards per game during the regular season. We also see White get a lot of minutes and between the minutes he gets and the shot volume, it makes him a worthy dart throw. White has actually shot 50 percent or better and played 30 minutes or more in three of four games in this series.

Jordan Poole doesn’t get as many minutes as White does. Still, the Warriors rely on him more with the team's backup wing players not making much of a splash on offense. He scored 14 points last game and has hit double figures in scoring in each of his last three games. He’s been mainly scoring dependant, but he has produced a few dimes and grabbed steals in two of his last three games. Poole took 13 shots last game and he takes a lot of long-range field goals. Seeing Poole get a good amount of shots in 20-25 minutes is very encouraging. He’s shot over 46 percent in both of his last two games. Poole is a good driver as well and we’ve seen him find success inside the arc, and if he can nail another three-pointer or two he absolutely has 20-point scoring potential. He hasn’t received fewer than 21 minutes in any game in this series.