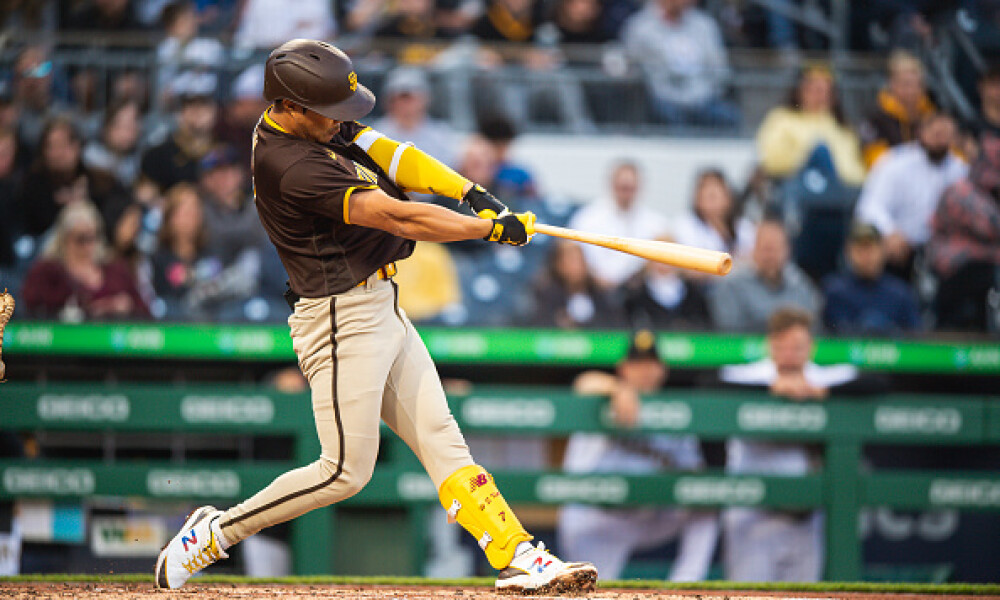 The 2022 fantasy baseball season experienced a bit of a tremor during spring training with the news that Fernando Tatis Jr. would miss time with a broken wrist. Fantasy baseball rankings had to be adjusted and managers started scouring  MLB depth charts for fantasy baseball sleepers and breakouts from within the San Diego Padres organization and across every other team as well. The reality remains that we’re still at least a month away from Tatis returning to action. In his place we’ve seen Jurickson Profar Get Off To A Productive Start and Eric Hosmer has been a surprise as well. Here at Fantasy Alarm we even previewed whether C.J. Abrams was worth a roster spot for your fantasy baseball team, although he’s certainly had his own share of growing pains in his rookie season. But one player has been quite productive and if you’ve monitored the MLB Starting Lineups each day you’ll have noticed the Padres are slowly moving Ha-Seong Kim up in their lineup and he hasn’t quite disappointed. While he isn't shooting up the fantasy baseball keeper rankings, the fantasy baseball community has taken notice considering his rostership spike in the last week.

Ha-Seong Kim was signed as a free agent from the Korean Baseball Organization ahead of the 2021 Major League Baseball season. The Padres gave him a nice $28 million contract with a fifth year option that could make the deal worth up to $39 million. Kim posted five straight seasons on 90+ runs scored with the Kiwoom Heroes and he hit at least 19 home runs in each of his six seasons overseas. His first season in MLB was a tough transition as he struggled with plate discipline and he batted a paltry .202 with just eight home runs in 117 games. Many jumped to the conclusion that he was just another failed import after succeeding in a foreign market.

But the 2022 season has been kind to Kim. We cannot simply celebrate the fact one of the league’s premiere players was hurt before the season started, but the reality is that these situation present opportunities for other players to step up. His slash line isn’t incredibly impressive at just .250/.339/.519 but his strikeout rate is down 3.5 percentage points from a year ago while the walk percentage is up from 7.4% to 10.2%.

The Padres haven’t played since Sunday following a day off on Monday and a postponement on Tuesday. But since last Tuesday, Kim has two home runs, three doubles, five runs scored, and seven RBI.

That kind of explosive production is what led the Friars to promoting him to the six-hole this past weekend against the Pirates. But what is to be expected of Kim in both the short-and-long term with Fernando Tatis Jr.’s return looming in just over a month?

For starters, don’t expect him to move up any higher than sixth in the order. Can he get a spot start higher every now and then? Sure, but he likely isn’t permanently moving ahead of Trent Grisham, Jake Cronenworth, Manny Machado, Jurickson Profar, or Eric Hosmer. If one of those players were to get a day off and Kim was to hit higher in the order then jump all over that in MLB DFS. Kim may provide help with counting stats since he currently has 13 runs scored and 10 RBI in 17 games, but they’ve come in bunches, most notably when the Padres are not playing in Petco Park. Let’s take a look at his home/road splits…

Now this is a small sample size. Very small. And similar numbers almost apply to his lefty-righty splits as well. But a big key to his early success lies in his plate discipline as alluded to above. His overall swing percentage is down 5.2 percentage points from a year ago and his Z-Swing% is actually down ten percentage points while his contact in the zone is up to 86.8% according to Baseball Savant. He’s become more patient and selective with his pitches. Kim was swinging at 31.6% of first pitches a year ago and that’s down to 20.3% which can still contribute to taking strikes. However, pitchers were in the know a year ago regarding his aggressiveness at the dish. Patience is a virtue and it already looks like Kim should easily surpass the counting stats he set in his 2021 MLB debut.

However, the playing time may not be a luxury upon Tatis’ return. Kim carries eligibility at second base, shortstop, and third base which means you can also play him at middle-or-corner infield, or utility. But the hard thing to project is where will the Padres slot him in the lineup during the summer? Jake Cronenworth got off to a sluggish start but showed signs of turning it around toward the end of April. And while this is a “Second Baseman Preview” the reality is that he’s more comfortable at shortstop of third base, but he at least carried second base eligibility. Manny Machado isn’t losing his spot and it would take some reps and experience in the outfield before the Padres entertained that idea. It seems like it would take a serious injury to a featured player to really open up long-term value for Kim.

But that doesn’t mean you can’t enjoy the immediate spoils. Ride the wave! Strike while the iron is hot! Cross that Tatis bridge when you get to it! Fantasy baseball is the long game. You have to be flexibly with your lineup on a daily/weekly basis throughout the year. We’re still weeks away from Tatis’ return and Kim is plenty valuable in deeper leagues. I would suggest only adding him in shallower leagues if you play in leagues with deep rosters and middle-or-corner infield positions in your lineup.

Is he a fantasy baseball must add? No. If you’re set at the position and with your infield, I’d rather see what happens by stashing Adley Rutschman. Kim isn’t going to win anybody a league, nor will he be the bright spot to winning your weekly matchup. But he can contribute in some categories to keep you afloat if you are currently fighting the injury bug or feel like you need to scratch and crawl your way back to the top of your fantasy baseball league’s standings.