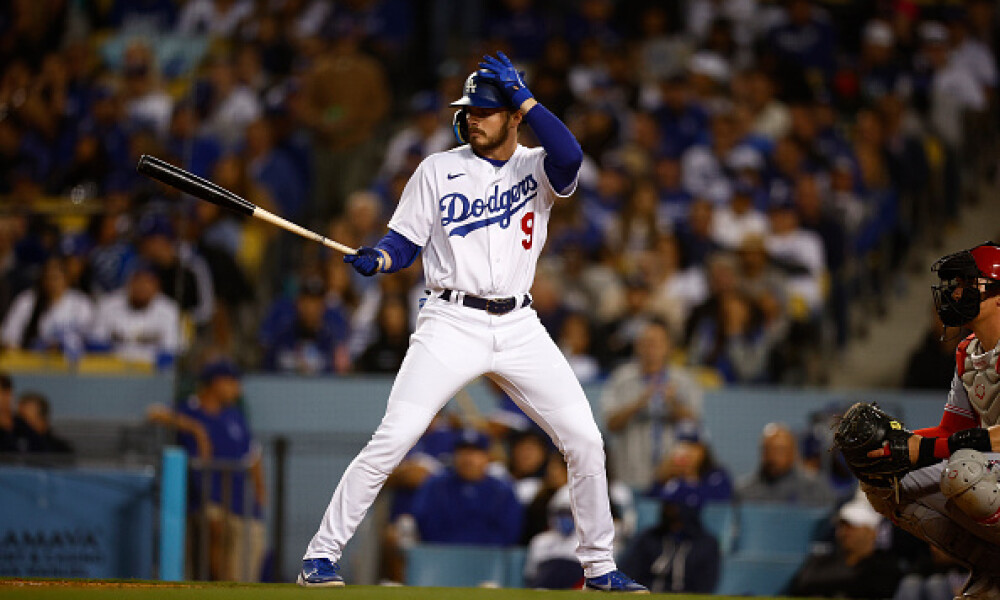 Through the first 10 games of the 2022 Major League Baseball season, Los Angeles Dodgers’ second baseman (and outfielder) Gavin Lux is hitting .276 with an .888 OPS and more walks than strikeouts. He’s secured an everyday role in one of the game’s best lineups, hitting alongside the likes of Mookie Betts, Freddie Freeman, Trea Turner, and others. After a less than impressive 2021 season, Gavin Lux is looking like a fantasy baseball breakout in 2022. Let’s take a deeper dive and see why Lux has been so good in 2022, and what fantasy baseball managers should be cognizant of moving forward.

In 2021, Lux spent time on the injured list for wrist soreness and a hamstring strain, and he even was optioned back down closer to the end of the season. He had a hard time getting going last year, as he hit just .231 before the All-Star break, but he did perform very well in September, hitting .367 with a .976 OPS that month. Coming into the season, the questions around Gavin Lux weren’t solely about his skillset, but more so would he have the opportunity to shine. Well, those managers that took a chance have been rewarded thus far.

We are seeing everything we wanted, and needed, to know before the season started for a Gavin Lux breakout in 2022.

The Dodgers have a wealth of versatility and Lux is moving around a good bit. Not only is his flexibility good for his playing time outlook, but fantasy managers can benefit from the added positions to Lux’s ledger. Lux has started all but two games this year for the Dodgers, and he’s made six starts at second base and three in left field. Depending on your league settings, you may be able to slot Lux in as your team’s second baseman, shortstop or in the outfield. That has been great, in both reality and fantasy.

Perhaps the brightest spot from Lux’s success in early 2022 is the quality of the contact that he’s making. Last year, Lux had just a 3.9 percent barrel rate, whereas that mark is all the way up to 16.7 percent in 2022. Lux is nearly halfway to the total number of barrels he had in 102 games last season! His average exit velocity is way up, and actually sits in the 93rd percentile at the moment (just 61st percentile last season).

Beyond the quality of contact, other than a jump in whiffs against fastballs, Lux has drastically cut into his swings-and-misses against non-heaters, leading to a 10 percent drop in his chase rate thus far. The improved plate discipline has also pushed up an already solid walk rate to an immense 18.9 percent in 2022. 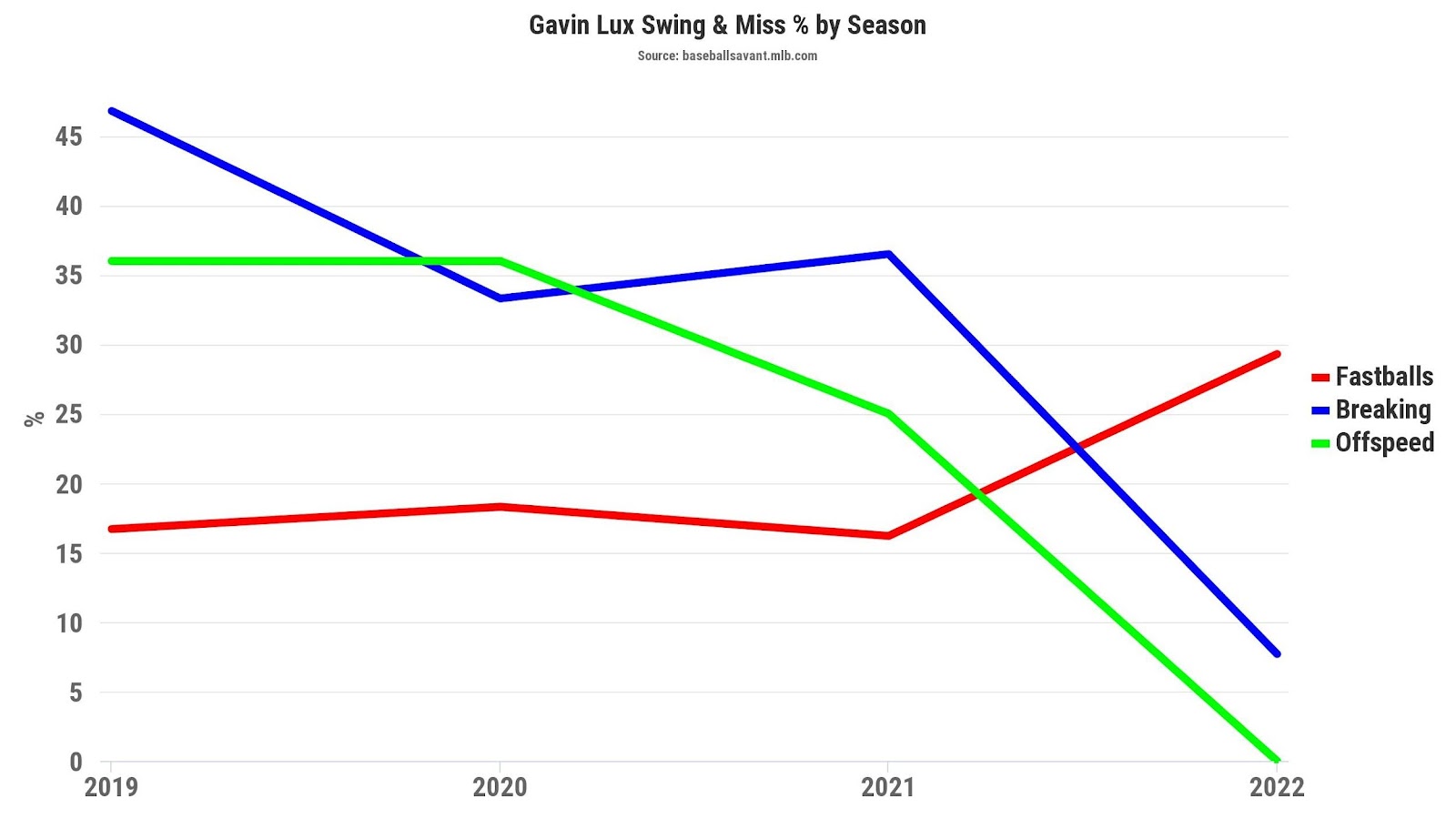 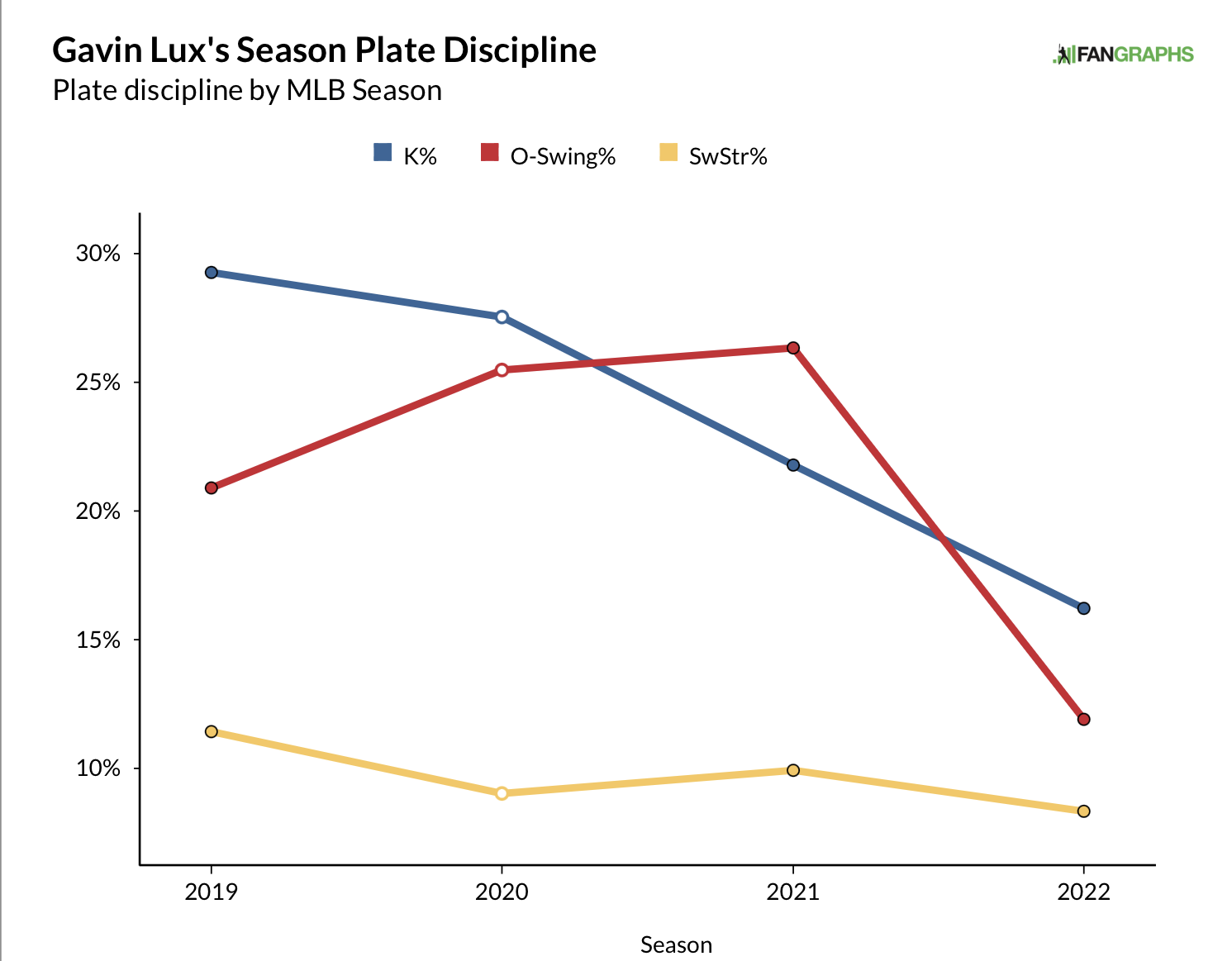 It’s not that crazy when you think about it. In its simplest terms:

He was just scratched with back tightness from yesterday’s game. How long will this linger? Back issues can be very finicky and hang around longer than one would like, just ask Clayton Kershaw or Christian Yelich.

Can Lux improve against southpaws? He never hit them particularly well in the minors, and with the Dodgers, he has a measly .171 batting average with a 27 percent strikeout rate and .233 wOBA for his career. If it weren’t for his back injury, he likely would have started last night against a lefty, so the Dodgers are at least giving Lux at-bats against lefties, but if the numbers aren’t there against southpaws, could he fall into a platoon of sorts? It seems drastic this early in the year, but it’s worth noting nonetheless.

I’m not saying it can’t be done with a high ground ball rate, but Lux’s 54.2 percent ground ball rate is higher than I would like in terms of potential power production. Dating back to 2014, there have been just nine seasons where a player has hit 20+ home runs while having a ground ball rate north of 54 percent, and a fly ball rate below 30 percent.

Again, I’m not saying it can’t be done, but for the most power potential/production for Lux, he’ll need to maintain his excellent hard contact metrics to date, but start trading in some ground balls for fly balls and line drives.

Lux is putting it all together, and while hitting near the bottom of the order may not be great for his total number of at-bats and ability to accumulate stats, he’s essentially the second leadoff man for the Dodgers. What does this mean? Well, especially if he hits ninth, that means the next three batters to come up after he gets on base are Mookie Betts, Freddie Freeman, and Trea Turner. It’s hard to beat that behind you in the lineup!

If you drafted Lux, you’re enjoying the early season returns, and even more so if your league values on-base percentage as a scoring category. Hopefully this back tightness doesn’t keep him out long, because he was very impressive through his first 37 plate appearances on the year. Lux is a player I’m targeting in trades, if possible, and if you already roster Lux, there are only two things you need to do: 1) Keep starting him (when healthy), and 2) hope for more fly balls and less ground balls.