2022 Fantasy Baseball Player Spotlight: Should C.J. Cron be a Platoon Player in Fantasy? 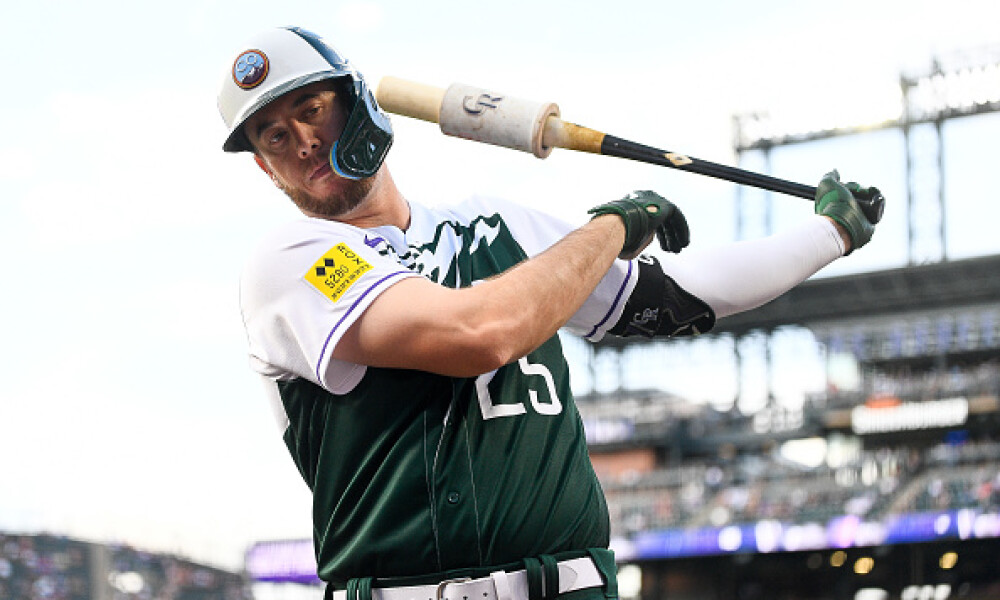 One of the most important things we have to remember about MLB fantasy rankings is how fluid they need to be. Ultimately, we also need to be better about truly evaluating all the facts and looking strictly at the numbers and avoiding any preconceived notions or thoughts. This can apply to a lot of situations in life, even outside of fantasy baseball, but at the risk of getting too deep, I’m just going to stick with C.J. Cron — who is on the way towards representing the Colorado Rockies at the MLB All-Star game next month.

Before Cron found his way to Colorado and Coors Field, the first baseman spent some time bouncing around the American League playing for the Angels, Rays, Twins, and Tigers. To begin with, that didn’t help our perceived value, and it always seemed like we were left wanting more with Cron. That at least was the case for the former first round pick as in his four years with the Angels, he never hit more than 16 home runs or drove in more than 69 runs. In fact, Cron had three straight seasons of 16 home runs, but he also never played more than 116 games so the argument could have been made that he simply needed more playing time.

Cron then went to Tampa Bay and exploded for 30 home runs and 74 RBI in 140 games. While the batting average was never great, it was always serviceable for the career .264 hitter. While he quickly moved onto Minnesota, Cron did have success with the Twins hitting 25 home runs and driving in a career high (to that point) 78 runs.

We can just consider 2020 a mess for Cron as he only got into 30 games with Detroit and hit just .193 with four home runs and eight RBI. By this point though, the veteran had established himself as a solid, if interchangeable, corner infield piece.

As with any player that makes the move to Colorado though, our attention was piqued when Cron signed with the Rockies before last season. Cron got into 142 games with the Rockies, a career high, and proceeded to hit 28 home runs while driving in a career best 92 runs and also posting a career high .281 batting average.

While Cron proved he can be a solid contributor already, this was next level contributions, and even though 2022 is his age-32 season, it is clear that we need to adjust our rankings and thought process surrounding him. Well as long as he is in Colorado that is.

Ultimately, fantasy baseball players are measured by their full bodies of work. We look at the back of their baseball card in October and evaluate if their performance for the season met the expectations, we had for them months earlier. At this point, especially if you were victorious, you don’t care how the sausage was made, just that it was delicious.

With players such as Cron though, is that really the right approach?

Since I asked the question, I’m sure you can figure out where I’m going with this, but Cron needs to be a platoon player. As much as I would love to dig into advanced stats here and talk about how much better he looks playing in Colorado, how his approach has changed, and he is finally living up to expectations with regular playing time, I’m afraid I would be selling all of us short.

Before we go any further, let’s take a look at Cron’s home/road splits over the past year-plus that he has spent in Colorado.

Part of the problem is Colorado as a whole performs better at home than on the road, but Cron clearly is no different. On a composite level, he’s going to get you where you need to be at the end of the season, but ultimately, he’s still nothing more than the corner infield option we thought he has been; for half the time.

When it comes to Cron we can’t allow ourselves to be smitten by the overall production. While he still has at least one more year in Coors Field, there will be a letdown if he ever leaves Colorado. I mean that is already occurring when he simply goes on a road trip, so it’s something we need to be aware of.

The best way to treat Cron is to truly view him as a platoon option. Don’t be afraid to nail him to the bench when he is on the road, and lock him in at home. As we are now a third of the way through the season, we do need to be concerned about his lopsided at bats to this point at home compared to on the road. By the end of the season that will even out, so this might be the perfect time to sell Cron.