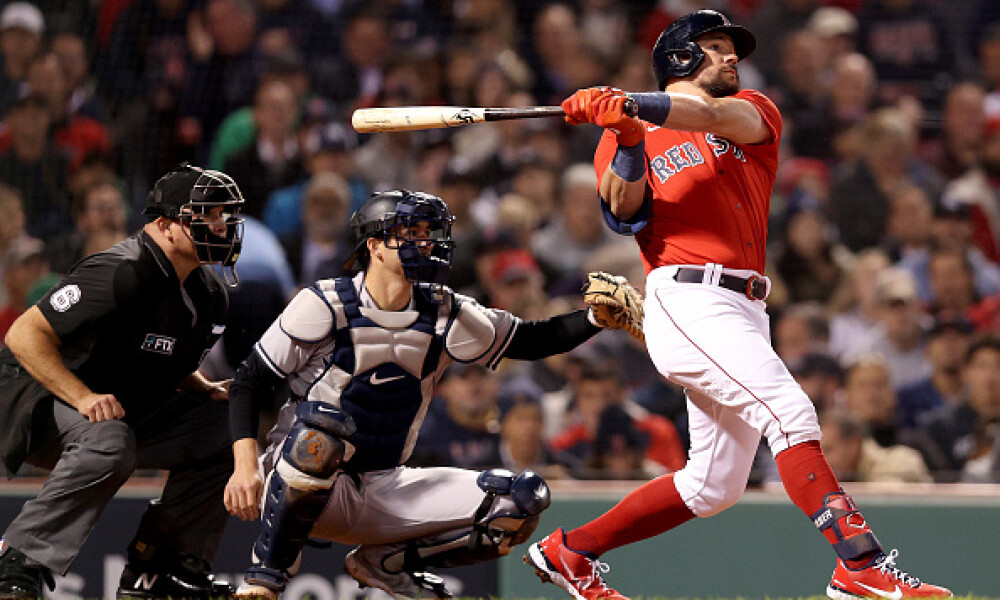 With the MLB lockout still in effect, fantasy baseball players continue to find their draft preparation to be more complicated than ever. The MLB owners put a deadline of February 28 as the point where regular-season games would be canceled, but we are now hearing, as both sides have spent the past week in daily negotiations, that this is more of a soft deadline than anything. Maybe that’s because they knew how much a hard-lined stance like that would sit with the MLBPA and its rank-and-file. Nevertheless, we are still sitting here waiting with bated breath for some positive movement.

In the meantime, it is up to you to stay on top of all the latest news and notes, because once an agreement is reached, we are going to see a flurry of free-agent signings and trades. This series focuses on those players who remain unsigned at the moment but are still worth drafting in your fantasy baseball leagues. Today’s installment, the outfielders, happens to have some of the most relevant players to discuss.

After smacking a career-best 34 home runs and driving in 100 runs for just the second time in his career, Nick Castellanos not only declined his $16M option for 2022, but he also declined the Reds one-year, $18.4M qualifying offer in order to test the free-agent market. You should have zero hesitation when it comes to drafting Castellanos, but how early to draft him should be based on where he ultimately ends up. Ballpark size does, obviously matter, though Castellanos managed to post strong totals when he was playing for Detroit, so it’s not exactly make-or-break where he lands. On Friday’s Fantasy Alarm Show, Jim Bowden said the signs are pointing the 30-year-old to the south side of Chicago where he would be expected to post similar numbers to his 2021 stat line. In that White Sox lineup? Oh, baby! Let’s keep our fingers crossed.

Injuries and just an overall down season in 2021 put Michael Conforto into a tough spot right now. He turned down the Mets qualifying offer in hopes to land a long-term deal, but this lockout has certainly stymied his plans. But all is not lost for the left-handed power hitter. Though his numbers overall were down, he did actually boost his walk rate and lower his strikeouts. If he can find a solid landing spot in a decent ballpark, then we could see a return to his 2017 form where he was getting more of the barrel on the ball and hitting for both power and average.

Given the defensive liability here in the outfield, the expectation is that Kyle Schwarber will remain a designated hitter now that the universal DH ratification has opened up additional possibilities for him. Jim Bowden seems to believe Schwarber will simply stay in Boston which won’t detract from his value in any way. In fact, staying in Boston might even bump him up in the ADP world as he posted a career-best .928 OPS and will remain a major part of one of the strongest offensive lineups in baseball.

While injuries and changing leagues hurt the overall totals for Eddie Rosario, the fact that he earned NLCS MVP honors last season shows you that he is more than capable of returning to his old form. Landing spots are going to factor into his overall value this season as he remains more of a pull-hitter and would obviously benefit more from a stadium with a more hitter-friendly right-field line. If you can get him at his current ADP mark of 205.64, I think it’s a steal, but I wouldn’t push more than a round or two earlier until he signs.

A return to his 40-homer season from 2019 seems unlikely, but after watching the improvements Jorge Soler made with regard to his plate discipline, there’s definite hope for a better overall fantasy product. After being dealt to the Braves at the trade deadline, Soler posted an 18.8-percent strikeout rate and a 12.5-percent walk rate while throwing down with a .911 OPS. For Soler, those numbers are amazing and the marked improvement was a huge eye-opener which ultimately concluded the season with a World Series MVP for the 30-year-ld slugger. If he can maintain these improvements – and yes, some regression is obviously expected – Soler could be a huge value, especially at his current 195.26 ADP. And while ballpark dimensions do make a difference, Soler can hit anywhere if he’s locked in like this.

Since we only had four worthy-enough shortstops in the last piece, we’ll make it up to you with a DH bonus here in the outfielder section.

Every single year, we say the exact same thing when discussing Nelson Cruz in fantasy. The guy is turning [insert age, but for this season it’s 42-years-old]; at some point, the power is going to run out. But was that actually last year where he hit just 32 home runs and posted his lowest ISO (.232) since 2012? With 32 homers last year, a time where we were told the ball was not consistent and calling Minnesota and Tampa Bay home, I might be inclined to grab Cruz should he land somewhere favorable. Not that I won’t touch him at his current mark of 152.4 if needing power, but I wouldn’t bump him up much more unless he somehow becomes the Rockies' new DH.

Where does Fantasy Alarm have these outfielders ranked? Full 2022 fantasy baseball player rankings from Jim Bowden, Adam Ronis, and Howard Bender can be found here in our Fantasy Baseball Draft Guide.